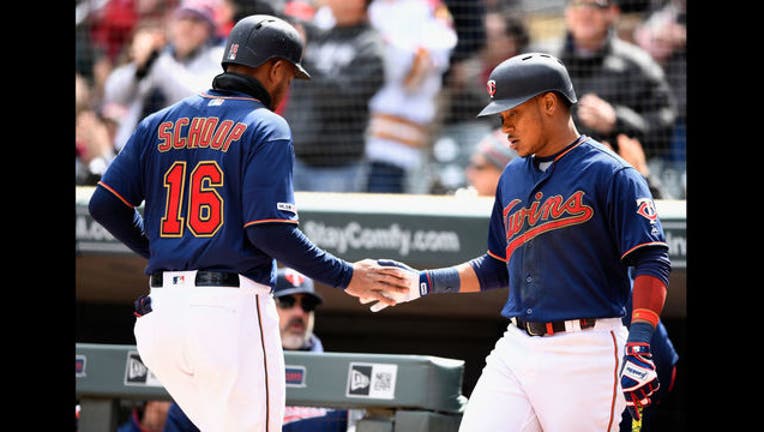 MINNEAPOLIS, MN - APRIL 13: Jorge Polanco #11 of the Minnesota Twins congratulates teammate Jonathan Schoop #16 on scoring a run against the Detroit Tigers during the third inning of the game. (Photo by Hannah Foslien/Getty Images)

Pineda labored through six innings and Eddie Rosario drove in two runs as Minnesota had just five singles in 4-3 win over the Detroit Tigers on Saturday.

The Twins entered the game with 26 walks, the fewest in the majors, but drew seven against the Tigers.

"I believe we went up there looking for good pitches to hit and when we had the opportunity to maybe take a few pitches and kind of draw that inning out ... and we didn't expand the zone," manager Rocco Baldelli said.

He was referencing when the Twins took a 4-2 lead in the third.

"That was the difference in the ballgame - the two walks to start that inning, the four runs that came in," said Detroit starter Tyson Ross (1-2), who allowed four earned runs and five hits in six innings.

The first three Twins batters walked in the seventh. But after a couple strikeouts, Rosario hit a fly ball to the warning track in center.

In his third start, and longest outing of the season, Pineda (2-0) allowed three earned runs and eight hits, striking out five on a 37-degree day. The big righty, who had Tommy John surgery in July 2017 and did not play in 2018, has 15 strikeouts in 15 innings this season.

Trevor Hildenberger and Taylor Rogers each pitched a scoreless inning, and Blake Parker got the last three outs for his third save.

The Tigers had the tying run at second base in the ninth, but JaCoby Jones and Josh Harrison struck out. The Tigers were 2 for 15 with runners in scoring position.

"It probably should've been our ballgame," Detroit manager Ron Gardenhire said. "We had enough people out there left on base, people in scoring position, to get one of those to fall down or fall in there, we'd have been OK."

Detroit got some unexpected assistance to take a 2-0 lead in the third.

The first three Tigers singled to load the bases, the last being a likely double-play grounder that deflected off second-base umpire Chris Guccione and into short left field. Harrison followed with a sacrifice fly and Jeimer Candelario ended an 0-for-21 slump with a bloop RBI single.

Christin Stewart hit his third homer of the year in the sixth. Detroit has an MLB-worst six home runs.

Friday's game was postponed due to weather. It marked Minnesota's sixth off-day of the season that began March 28. Saturday was the first of 12 straight days with a game for the Twins, who're scheduled to play 25 games in 26 days and 39 games in 41 days.

Tigers: SS Jordy Mercer was placed on the 10-day disabled list after leaving the game with a right quad spasm. A corresponding move is to be made Sunday. ... INF/OF Niko Goodrum sat out due to illness. ... OF Nick Castellanos (sprained right big toe) probably won't play this weekend, according to Gardenhire.

Twins: 3B Miguel Sano took batting practice for the first time. Out with a right heel laceration sustained during a Dominican winter league playoff celebration Jan. 26, he is scheduled to go to Fort Myers in the middle of next week for a simulated Spring Training; however, he isn't expected to play in a game for a couple weeks. ... RHP Matt Magill (shoulder tendinitis) is scheduled to go to Triple-A Rochester Sunday and LHP Gabriel Moya (shoulder tendinitis) is likely headed to Double-A Pensacola Tuesday or Wednesday.