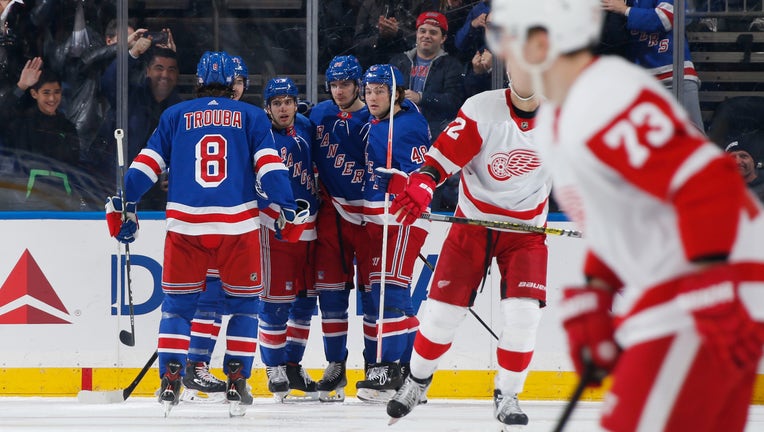 NEW YORK, NY - NOVEMBER 06: Tony DeAngelo #77 of the New York Rangers celebrates with teammates after scoring a goal in the second period against the Detroit Red Wings at Madison Square Garden on November 6, 2019 in New York City. (Photo by Jared Sil

NEW YORK - After a bad loss in their last game, the New York Rangers bounced back with a big win.

Tony DeAngelo had a goal and an assist in New York's three-goal second period, Henrik Lundqvist stopped 35 shots during his first start in 10 days, and the Rangers beat the struggling Detroit Red Wings 5-1 Wednesday night.

New York was coming off a 6-2 defeat against an Ottawa team that had been winless on the road this season.

"We had to have a performance like this after what happened last game," Lundqvist said. "You need to learn from our ups and downs and I think we did."

Artemi Panarin and Ryan Strome also had a goal and an assist apiece, and Chris Kreider and Greg McKegg scored to help New York win for the fourth time in six games. Lundqvist, after sitting out the previous three games, made 24 saves over the final 28:06.

"It was really important (to get the win)," Panarin said through a translator. "We played more simple, with less mistakes."

Valtteri Filppula scored and Jimmy Howard finished with 26 saves, but the Red Wings' fourth straight loss dropped them to 1-11-1 in their last 13 games.

"It's frustrating," Dylan Larkin said. "It's night after night. We try different things, different lineups. It was special teams tonight. Seems like it's a different story every night. We can't really seem to generate a full 60 minutes, full complete game."

Trailing 3-1 in the second, the Red Wings picked up the pressure. They outshot the Rangers 15-3 over a 16½-minute stretch, but couldn't beat Lundqvist.

"I think that was the most structured game I've had in front of me so far this year," Lundqvist said. "We were in the right place, and the few chances they had I felt we were there to help out on rebounds and didn't give them too much room."

McKegg pushed the lead to 4-1 at 8:44 on the Rangers' third shot of the period. With the Red Wings on a power play, he brought the puck up the left side and sent a shot that went off the shaft of Howard's stick and up in the air. With the goalie unaware where the puck was as it lay in front, McKegg skated up and put it in for New York's third short-handed score of the season.

The Rangers also had two power-play goals and one at even strength, and held the Red Wings to 0 for 2 on their power play.

"Penalty killing and power plays is going to be the difference a lot of nights," Lundqvist said. "We know that and we continue to work on it in practice and talk before games. It's such a big part of winning and it's nice when we take care of business like that."

Panarin added an empty-netter with 2:37 left for his seventh goal and 14th point, both team highs.

After a scoreless first period, the Rangers took control with three goals in the first 8:49 of the second - including two on their first three shots.

DeAngelo got New York on the board with a power-play goal, knocking in the rebound of Brendan Lemieux's shot in front for his sixth at 4:25.

Kreider made it 2-0 as he beat Howard up high on the glove side from the right side for his third at 6:04.

The Rangers made it 3-0 with their second power-play goal of the period as Adam Fox's shot deflected off Strome's right shoulder and in at 8:49. Strome has five goals and six assists in his last eight games.

Just 52 seconds later, Filppula put the puck past Lundqvist on an odd-man rush to pull the Red Wings to 3-1.

NOTES: Panarin extended his point streak to six games (three goals, five assists). He also has eight goals and 10 assists in 11 career games against Detroit. ... Rangers C Mika Zibanejad missed his fourth straight game with an upper body injury. ... The teams meet two more times this season in a home-and-home on consecutive nights: Jan. 31 back at Madison Square Garden, and Feb. 1 in Detroit. ... The Red Wings have been outscored 55-24 over the second and third periods this season. ... After the game, Detroit acquired center Robby Fabbri from St. Louis for center Jacob de la Rose.

Rangers: At the Carolina Hurricanes on Thursday night.