Skubal (7-10) allowed five hits and struck out four. He had surrendered six home runs in 10 2/3 innings during his last two starts.

"I wanted to attack these guys, especially up in the zone with the fastball and then just keep them off-balance with everything else," Skubal said. "They’re a really good fastball hitting team, especially in fastball counts." 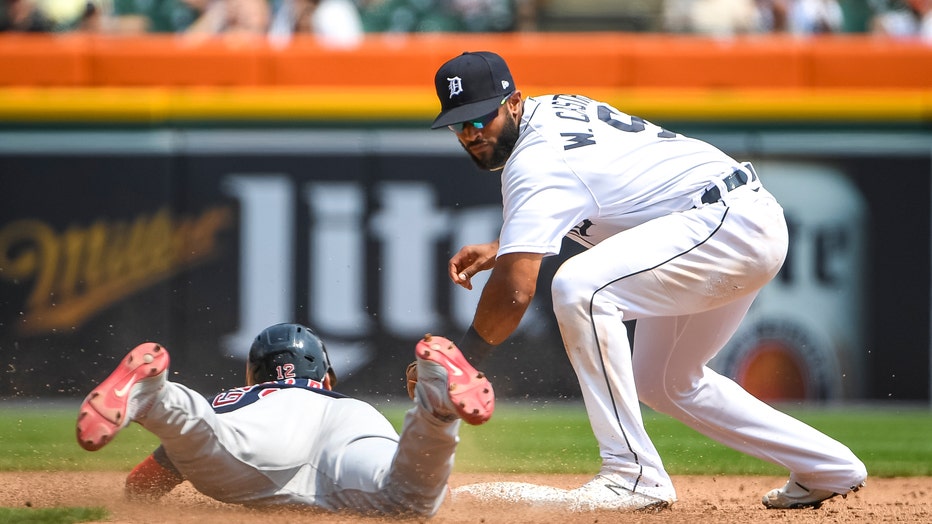 DETROIT, MICHIGAN - AUGUST 05: Marwin Gonzalez #12 of the Boston Red Sox slides to second base against Willi Castro #9 of the Detroit Tigers during the top of the fifth inning at Comerica Park on August 05, 2021 in Detroit, Michigan. (Photo by Nic An

Robbie Grossman hit a leadoff homer in the bottom of the first. He departed the game prior to the third with a bruised left elbow after getting hit by a pitch.

Jonathan Schoop contributed two hits and two RBIs for Detroit. Miguel Cabrera went 0-for-4 with a walk and remained two homers shy of 500.

"This is a good team across the way and we held our own," Tigers manager A.J. Hinch said. "We’re still fighting to win every game. We don’t put any more pressure on ourselves whether we’re playing a winning team or a team under .500."

The Red Sox lost for the sixth time in seven games and dropped 1 1/2 games behind idle Tampa Bay in the AL East.

"I know we’re in August and it’s a grind but we have a good opportunity to play in October," Cora said. "We’ve put ourselves in this situation. People can doubt us (but) ... we have a good baseball team and we know we can do it."

Grossman blasted an 0-2 pitch for his 17th home run.

Detroit extended its lead to 3-0 in the third. Reyes led off with a triple and scored on Zack Short’s sacrifice fly. Schoop added a bases-loaded groundout.

Reyes is the first major leaguer to hit a triple from both sides of the plate in the game since Detroit’s Dmitri Young at Baltimore on May 6, 2003.

Red Sox: OF Delino DeShields Jr. was acquired from Texas for cash and assigned to Triple-A Worcester. He was batting .263 with five home runs and 16 stolen bases in 66 games with Triple-A Round Rock this season. DeShields has appeared in 576 major league games.

Red Sox: RHP Nathan Eovaldi (9-6, 3.71 ERA) will start the opener of a four-game series at Toronto on Friday. Eovaldi will be seeking his first victory since July 1. He held the Blue Jays scoreless in 6 2/3 innings on June 14.