DETROIT - Jack Roslovic had three goals, including the winner at 3:19 of overtime, and added an assist to lead the Columbus Blue Jackets past the Detroit Red Wings 5-4 Saturday night.

The Red Wings got goals from Dylan Larkin and Jakub Vrána, his second of the game, in the final few minutes of regulation to tie the game at 4-4.

Roslovic gave Columbus a 1-0 lead at 13:14 of the first period before Vrana tied it at 13:41 of the second when he scored on a breakaway. He skated around defenseman Vladislav Gavrikov and beat goaltender Elvis Merzlikins through his pads.

Vrána has 10 goals in just 16 games this season and has seven goals and four assists in his last 10 games. 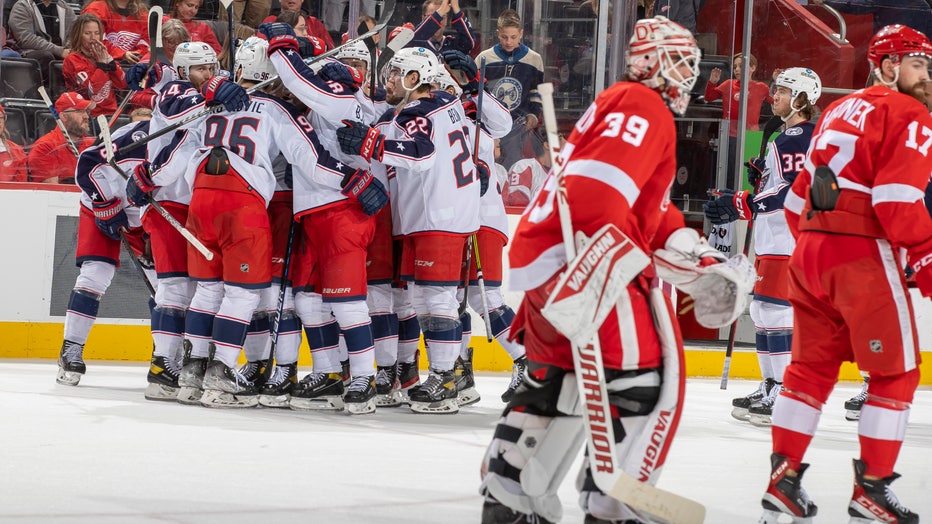 DETROIT, MI - APRIL 09: Alex Nedeljkovic (39) of the Detroit Red Wings skates off the ice as players from the Columbus Blue Jackets congratulate teammate Jack Roslovic (96) after scoring a goal in Overtime of an NHL game at Little Caesars Arena on Ap

Detroit defenseman Marc Staal made a perfect pass from the left boards to Sam Gagner at the right front of the net. and Gagner scored on the open side at 17:21 of the second to give the Red Wings a 2-1 lead. Gagner extended his goal streak to three games.

Cole Sillinger tied it 40 seconds later for Columbus and Roslovic notched his 14th goal early in the third before the Red Wings rallied.

Detroit goaltender Alex Nedeljkovic made 28 saves and Merzlikins had 34.

Red Wings captain Dylan Larkin skated in his 500th career game. He is the 50th player in franchise history to hit that milestone and the fifth skater from the 2014 NHL draft to reach that mark. … Roslovic played in his 300th career game.