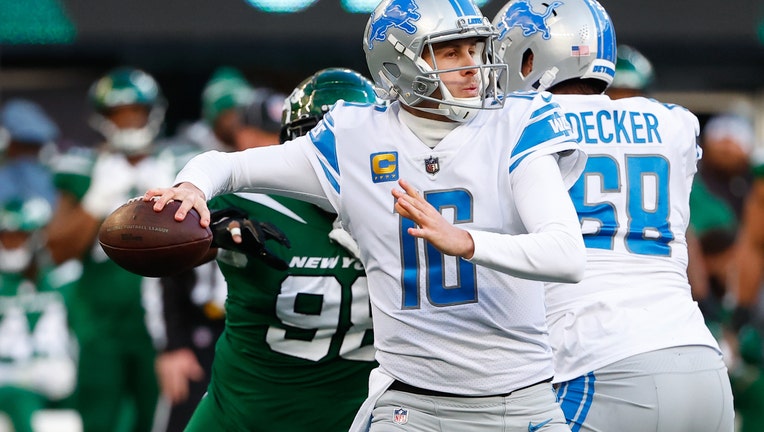 The Detroit Lions have become the darlings of the NFL as they've won 6 of their last 7 after starting the season 1-6. They're now sitting at 7-7 and are just one game out of the wild card spot.

The Lions are at .500 for the first time since week two when they beat the Washington Commanders. After that win, however, they lost five in a row, traded tight end T.J. Hockenson to the Minnesota Vikings for a couple of draft picks, and appeared to be headed towards another year of the rebuilding process.

And it all turned around in November.

Since Halloween, the Lions are 6-1 – with the only loss coming to the AFC-best Buffalo Bills on a field goal with 25 seconds left on Thanksgiving Day – and are in prime position for a spot in the playoffs with weeks to go in the season.

This weekend, the Lions are battling the 5-9 Carolina Panthers on Saturday - a team that inexplicably still has a chance at winning the NFC South despite firing their coach and trading away their best player in running back Christian McCaffrey.

First and foremost, Lions fans are rooting for a win. A loss in Charlotte would severely dim any playoff hopes.

But a win here and a couple of key losses to teams in front of the Lions could mean a playoff spot.

Justin Jackson talks about Detroit's recent success in his first year with the team and the strong support the team gets from its fans. He also goes into detail about a key block he made on the game winning score in last week's game against the Jets.

Who's in front of the Lions for the wild card spots?

The Lions (7-7) won't win the NFC North. The Minnesota Vikings (11-3) sewed up the division this past weekend. But Detroit is the 9th seed in the NFC Wild Card spot and have a good shot of climbing up this week.

A total of 7 teams make the playoffs: 4 division winners and three wild cards.

They have the same record as the Seattle Seahawks - a team they lost to earlier in the year - but it's not unthinkable to believe they Lions can jump them as soon as Christmas Eve.

Ahead of Seattle are the Washington Commanders (7-6-1) at the 7th spot and the New York Giants (8-5-1) at no. 6. The Dallas Cowboys are 10-4 with the other wild card spot but the Lions can't catch them at this point.

Who should Lions root for this weekend?

Seattle and Detroit have the same record - but the Seahawks' win over the Lions on Oct. 2 gives them the tiebreaker. The Lions really need to see Seattle lose this game - which would be their third straight loss.

The bad news: Kansas City has not played very well over the past couple of weeks. First, the Bengals came back on Kansas City to start December, then the Chiefs beat the 3-10 Broncos by just 6 points, followed by an overtime victory over the Texans thanks to a fumble.

The good news: The Chiefs are still fighting for that all-important first round bye in the playoffs so they will be focused on winning this game.

The 7-6-1 Washington Commanders need to lose. It's that simple. Right now, the Lions have the tiebreaker over the Commanders, which would have been great if they wouldn't have tied with the Giants earlier this year.

The bad news: If Washington wins and the Lions, nothing changes. Also - San Francisco is on their third quarterback of the season in Brock Purdy.

The good news: Despite playing their third QB, Purdy has kept San Francisco winning with six TDs and one interception over the past three games.  The 49ers have also lost only one game at home all year.

Again, an obvious one, root for San Francisco.

Want to secure the Lions playoff spot even more? The Giants need to lose twice. The Giants at 8-5-1 with the tie so losing here, combined with a Lions win, would give both teams 8 wins. But the Giants would be in front of the Lions with six losses.

The bad news: The Giants are 4-2 on the road, tied with the Vikings for second-best record in away games.

The good news: The Vikings a league best 7-1 at U.S. Bank Stadium. If the Vikings keep the second post in the NFC, they would have to take on the Lions in Minneapolis. The teams have split the season series at 1-1 but the Lions should have won both if not for an early coaching blunder that allowed the Vikings to score two touchdowns in the final 3 minutes of the game.

Root hard for the Vikings on this one.

It's fun root against Aaron Rodgers, right? Well, keep doing it. The Packers (6-8) are right behind the Lions in the wild card race. A loss here would keep them further behind Detroit.

The bad news: It's Aaron Rodgers.

The good news: The Dolphins have a talented offense and the game is in Miami, where they are 5-1.

Root for Miami - and against Green Bay.

That's right - we're including two teams who will not be playing in the playoffs and Matthew Stafford is the reason why. The Rams have the third-worst record in the NFL and the Lions are holding their first round pick. A loss here would get the Lions closer to one of the top draft picks in the 2023 NFL Draft.

As we mentioned above, the Lions can't catch Dallas and the Eagles have won the NFC East. But, looking ahead to later in the season, the Lions want both of these teams competing in week 18. Dallas plays at Washington while Philadelphia plays against the Giants at home.

Detroit wants both the Cowboys and Eagles to be competing in the final week of the season against those teams, especially if the Lions were to lose.