CLEVELAND - Collin Sexton scored 29 points and Andre Drummond had 23 points, 16 rebounds and five steals against his former team, powering the Cleveland Cavaliers to a 122-107 victory over the Detroit Pistons on Wednesday night.

Taurean Prince added 16 points and rookie Isaac Okoro had 10 points and a season-high six assists to help the Cavaliers snap a two-game losing streak and improve to 9-9. 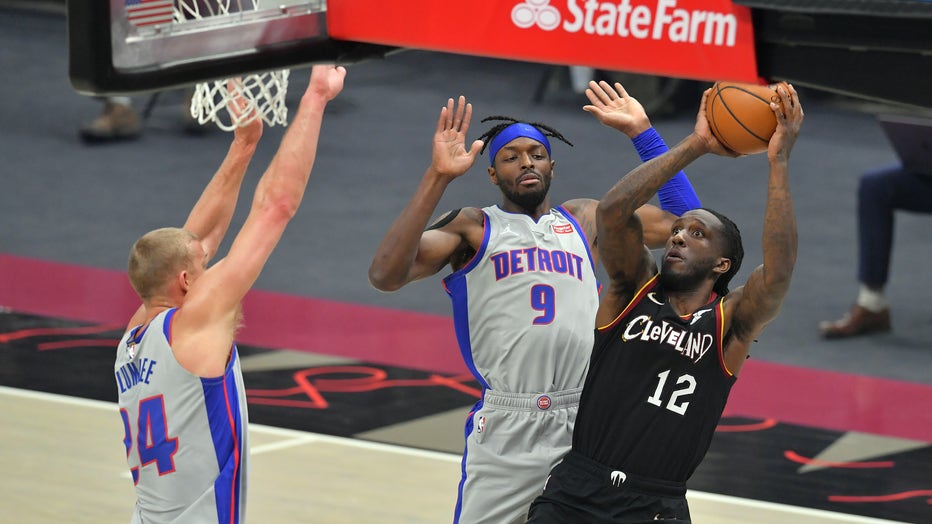 CLEVELAND, OHIO - JANUARY 27: Taurean Prince #12 of the Cleveland Cavaliers shoots against Mason Plumlee #24 and Jerami Grant #9 of the Detroit Pistons during the first quarter at Rocket Mortgage Fieldhouse on January 27, 2021 in Cleveland, Ohio. NOT

Jerami Grant scored 26 points and Mason Plumlee had 15 points, 12 rebounds and a career-high eight turnovers for Detroit. The Pistons have the worst road record in the Eastern Conference at 1-7. Grant made 10 of 10 free throws.

Drummond made a bank shot midway through the fourth quarter to give Cleveland its largest lead of the night at 108-89. The Cavaliers went ahead for good at 72-69 on Darius Garland's 3-pointer in the third.

Garland had 14, and Cedi Osman and Jarrett Allen added 10 apiece for Cleveland. The Cavaliers shot 54% from the field, going 52.4% on 3-pointers.

Cavaliers power forward Larry Nance Jr. was unavailable for the second straight game after spraining his right wrist at Boston on Sunday.

Pistons coach Dwane Casey is encouraged by Cleveland’s development, specifically mentioning Sexton and Garland. The Cavaliers are seventh in the East after finishing with the second-worst record in the NBA last season. "A couple of years ago, Cleveland was where we are now," Casey said. "They’re an exciting up-and-coming team, like we want to be."

Pistons: F Blake Griffin (left knee) and G Killian Hayes (right hip) were inactive. Griffin is not playing in back-to-back games for precautionary reasons. … Rookie G Saben Lee was assigned to the G-League in a procedural move. "Saben would have been inactive with Derrick (Rose) back, so this will save days on his two-way contract," Casey said.