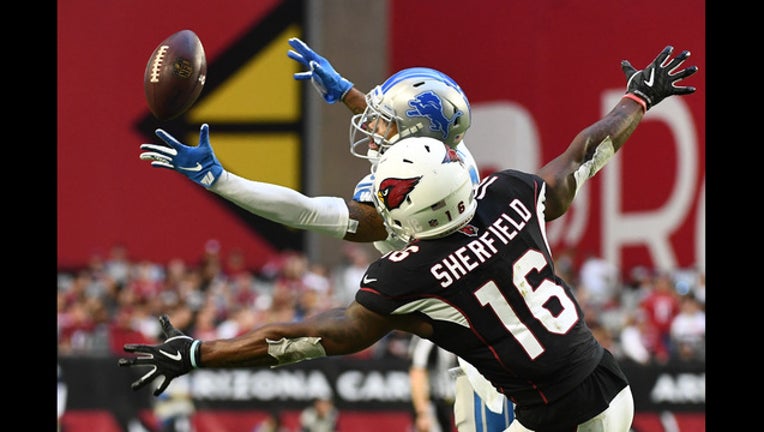 GLENDALE, ARIZONA - DECEMBER 09: Darius Slay #23 of the Detroit Lions catches the ball intended for Trent Sherfield #16 of the Arizona Cardinals then runs the ball 67 yards for a touchdown in the second half. (Photo by Jennifer Stewart/Getty Images)

That's exactly what happened in the biggest play of Detroit's 17-3 victory over the Arizona Cardinals on Sunday.

Darius Slay, who tied for the lead in the NFL with eight interceptions last season, stepped in front of intended receiver Trent Sherfield, picked off Rosen's pass and returned it 67 yards for the game's first touchdown, putting his team up 10-0 in the third quarter.

"He's a veteran. That's why maybe go away from him next time."

The Lions (5-8), losers of five of their previous six overall, ended an eight-game losing streak in Arizona that dated to 1993. It was a matchup of two first-year coaches who are having their struggles and this one clearly went to Detroit's Matt Patricia over the Cardinals' Steve Wilks.

Arizona (3-10), which fell flat coming off its biggest win of the season a week earlier at Green Bay, avoided being shut out with Zane Gonzalez's 22-yard field goal that cut the lead to 10-3 with 8:14 to play.

Rosen completed four of six passes as Arizona drove to the 5-yard line, but a fade pass to Larry Fitzgerald was incomplete and the Cardinals, who fell to 1-6 at home, settled for the field goal.

Detroit took the subsequent kickoff and went 75 yards in seven plays, with the help of a pass interference penalty against Budda Baker, and Zach Zenner's 1-yard touchdown run with 4:05 to play put the game safely in the Lions' control.

"It was missed tackles and penalties that got them down there," Wilks said. "I thought the defense kept us in the game pretty much to that point."

Matt Prater's 47-yard field goal in the first half accounted for the other Detroit points on a day neither offense could do much.

"It was one of the games you had to kind of wear them out," Lions quarterback Matthew Stafford said. "They got some good players up there. That fourth quarter our guys really started leaning on them, dominating."

Fitzgerald caught five passes, all in the second half and most when the game had been all but decided, to move ahead of Jerry Rice for most receptions by a player for one team at 1,286.

Detroit took the opening kickoff and moved downfield with a strong running game. But after a short pass from Stafford, LeGarrette Blount had the ball knocked loose by Baker, who recovered at the Cardinals 30.

Neither team threatened again until the Lions used up 7 minutes, 55 seconds to drive 65 yards and set up Prater's field goal with 9:35 left in the first half.

Arizona took the kickoff and got a 19-yard pass from Rosen to Sherfield, combined with a facemask penalty against Detroit, moved the ball to the Lions 30. But a pass to David Johnson lost 6 yards and Gonzalez's 54-yard field goal try had plenty of distance but bounced off the left upright.

Fitzgerald, who entered the game with at least one catch in 223 consecutive games, was targeted once and didn't have a catch in the first half. Finally, with 5:48 left in the third quarter, Fitzgerald's 14-yard reception kept the streak alive and moved him ahead of Rice. Three of his catches came the last time Arizona had the ball.

"Injuries happen," Patricia said. "Certainly we had a couple of them today. It is just important for us to always maintain our philosophy of everybody has to be ready to go."

Lions: at Buffalo next Sunday.

Cardinals: at Atlanta next Sunday.