Soderblom, a 2019 draft pick, played in the Swedish Hockey League the past two seasons. He’s the tallest player in franchise history at 6-foot-8.

"I wanted to get a good first shift, get things going, so I felt I did that," Soderblom said. "And I just built off of that."

Husso, acquired from St. Louis in a trade during the offseason, had his fourth shutout. 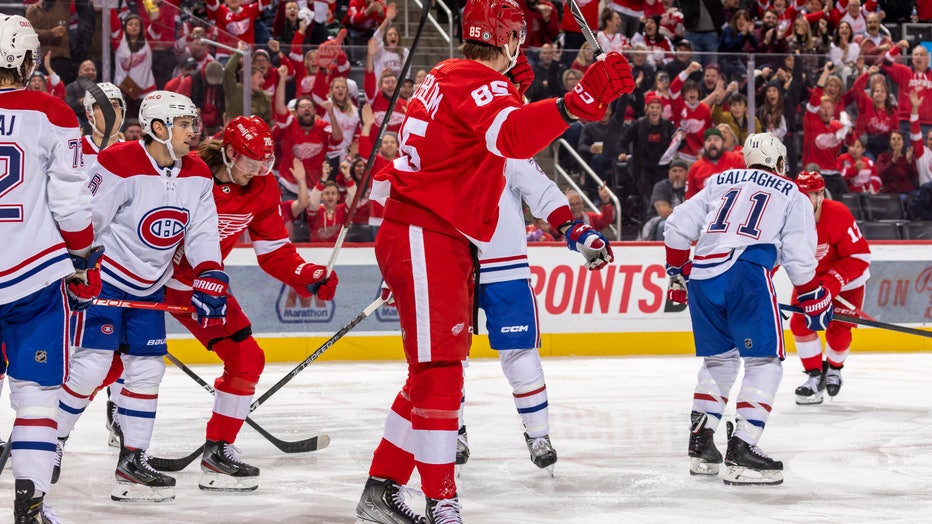 DETROIT, MI - OCTOBER 14: Elmer Soderblom #85 of the Detroit Red Wings scores his first NHL goal on Jake Allen #34 of the Montreal Canadiens (not pictured) during the third period at Little Caesars Arena on October 14, 2022 in Detroit, Michigan. (Pho

"I feel like we were on top of them all the time," Husso said. "It was one of those games, as a goalie, where you enjoy the play there. You trust the team and guys are doing a great job blocking shots and all of that. So it was a good game."

"The important thing is not only getting the first win but getting it the right way," Lalonde said. "We played a complete game tonight. You worry a little about the psyche of playing well and not getting rewarded with the outcome. Tonight, it all came through for us."

Jake Allen made 37 saves for Montreal. The Canadiens opened at home Wednesday night with a 4-3 victory over Toronto. They played four rookie defensemen for the second straight game and it caught up to them.

"It’s their home opener and they obviously had a lot of energy," Allen said. "They controlled the zone pretty well in the first period, but we got out of it at 0-0. That’s the important thing - we kept ourselves in the game. We were back on our heels a little bit, no question, but you have to be able to weather those storms."

The Red Wings peppered the net in the opening period, outshooting the Canadiens 25-10, and held a 34-18 advantage after two periods but neither side could break through.

Detroit finally ended the scoring drought when Rasmussen came from behind the net and tried to jam the puck past Allen, who made a pad save. Soderblom converted the rebound at 2:33 of the period.

"He handled tonight way better than I ever expected," Lalonde said. "As you saw, I trust him in every situation."

Husso made a sparkling glove save against Josh Anderson on Montreal power play midway through the period.

"If we’re not playing chaotic in front of him, he can look like that," Lalonde said about Husso. "He got the big save on the power play, which was huge, but for the most part we made it comfortable for him. That’s our goal going forward."

NOTES: Montreal D Mike Matheson is expected to be out eight weeks due to an abdominal muscle strain. ... The Red Wings’ 25 shots on goal during the first period were their most in any period since they had 26 on Dec. 13, 2010, against the Los Angeles Kings. ... Lalonde became the fourth consecutive head coach to win his Red Wings debut, joining Dave Lewis (2002), Mike Babcock (2005) and Blashill (2015).

Canadiens: At Washington on Saturday night.