Bingham scored 11 of his career-high matching 19 points during a crucial second-half stretch and Walker scored nine of his 11 points in the final 93 seconds to help the Spartans beat No. 12 Wisconsin 69-63 in the Big Ten Tournament quarterfinals.

"I was getting challenged by my coaches," Bingham said. "I felt like the last two games coming in, I was slacking in some areas and I just wanted to get it back right."

It was an astounding twist. Bingham hadn’t topped the 15-point mark since mid-December and entered tourney play with only two double-doubles all season. With 10 rebounds Friday, he now has two in two days. 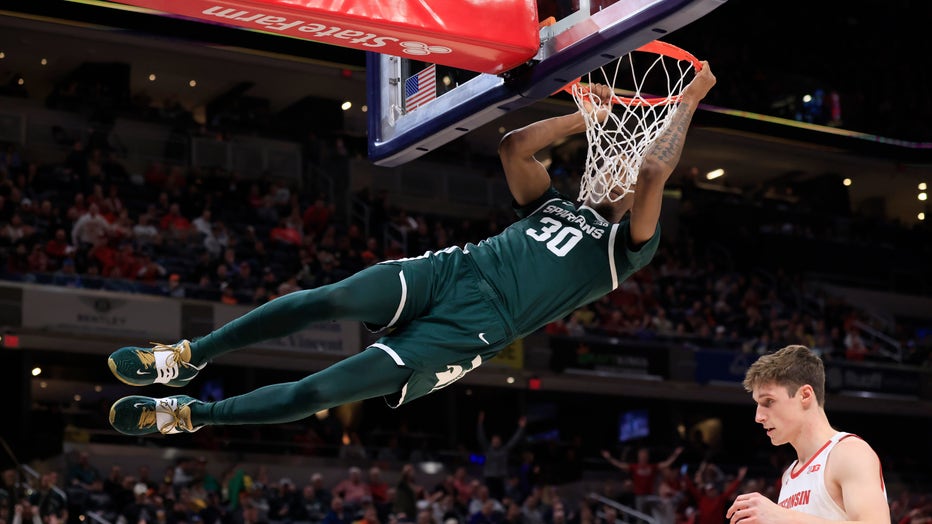 INDIANAPOLIS, INDIANA - MARCH 11: Marcus Bingham Jr. #30 of the Michigan State Spartans dunks the ball in the game against the Wisconsin Badgers during the Big Ten Championship at Gainbridge Fieldhouse on March 11, 2022 in Indianapolis, Indiana. (Pho

And this one came as the Big Ten’s top two seeds and regular-season co-champs, Wisconsin and No. 16 Illinois, both lost in the quarterfinals for the first time. The top-seeded Fighting Illini fell to Indiana in the first game Friday.

Michigan State (22-11) lost five of its last seven regular-season games but now finds itself one win away from playing in a sixth title game in 10 tourneys.

"It’s been an interesting year," Spartans coach Tom Izzo said, "but to do what we did, to play the way we did defensively, to keep the turnovers down after four or five early and then going inside to my big guy, who finally stayed inside, which was important, was big,.

Big Ten player of the year Johnny Davis played through an ankle injury but struggled. He missed his first eight shots, went 3 of 19 from the field, 0 for 5 on 3-pointers and wound up with 11 points and 11 rebounds.

Davis refused to blame the poor shooting on the injury, even though Izzo thought the lack of practice time probably had an impact.

Wisconsin lost its second straight for the first time all season — both by six or fewer points after starting the season with 15 straight wins in games that close.

They never trailed again though the Badgers tied the score at 58 on Chucky Hepburn's 3 with 1:56 to play. Walker answered with a short jumper to break the tie and a 15-footer to make it 62-58 with 58.4 seconds left.

Michigan State closed it out at the free-throw line.

"I thought there were times we let him (Bingham) catch it too deep and too easily and we didn't give his defender enough support," Badgers coach Greg Gard said. "He was better than what we were defensively."

Michigan State: The Spartans helped their NCAA Tournament seeding with this win. How far they'll climb remains to be seen, but they're just one win away from reaching the Big Ten title game for the sixth time in 10 tourneys.

Wisconsin: With Davis struggling, the Badgers weren't themselves. They shot 24.1% in the first half in a game that was reminiscent of their 2000 national semifinal game. Michigan State also won that one, 53-41, en route to coach Tom Izzo's only national championship.

The Badgers almost certainly will slide in the final rankings Monday but where they'll end up may be determined by how many upsets occur in conference tournaments this weekend. More interesting will be seeing how the NCAA Tournament selection committee views Davis' injury after Friday's game — or whether it costs Wisconsin a chance of playing in nearby Milwaukee.

Wisconsin: Will find out who it plays and where Sunday night.