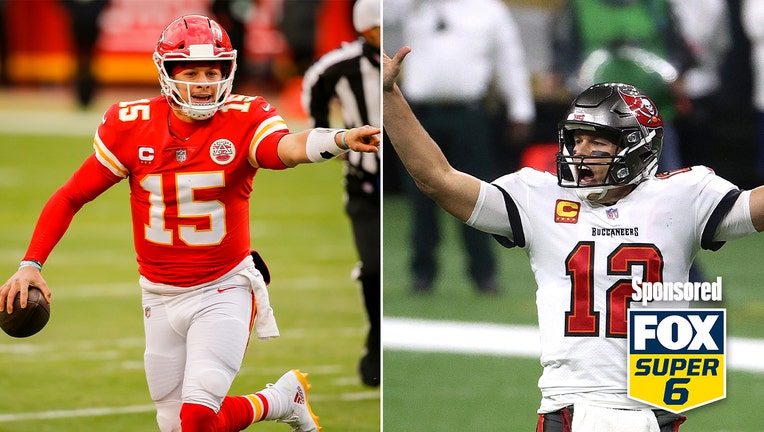 LEFT: Patrick Mahomes #15 of the Kansas City Chiefs looks for an open receiver in the second quarter against the Cleveland Browns in the AFC Divisional Playoff at Arrowhead Stadium on January 17, 2021 in Kansas City, Missouri. (Photo by David Eulitt/

In the seven days after NFL Championship Sunday, football wagering is all quiet on the western front. It’s a glorified bye week for bettors, who get a much-needed breather before zeroing in on their favorite wagers for the Super Bowl.

Sportsbooks around the world don’t have the same luxury during this period. They’re too busy creating and fine-tuning numbers, opening markets and working through state regulations for their Super Bowl proposition bets, better known as "props."

Manteris opened the "Yes" at 20-to-1, which received lopsided action all the way down to 2-to-1. Go figure, "The Fridge" rumbled into the end zone, costing Caesars more than $100,000 in losses on the prop.

That big loss more than 35 years ago led to a revolution in the sports betting space. In the coming decades, sportsbooks began to create dozens, then hundreds of Super Bowl props. This year, FOX Bet is estimating they’ll have a prop rolodex of more than 1,000 bets for Sunday’s showdown between the Kansas City Chiefs and Tampa Bay Buccaneers.

While markets such as Super Bowl MVP, Patrick Mahomes’ passing yards, Tom Brady’s interceptions and Tyrann Mathieu’s tackles are already live and wagerable, many more will be added in the coming days.

"The thing I love about Super Bowl week is that it feels quite old-school," FOX Bet content integration specialist Jacob Blangsted-Barnor told me. "So much trading nowadays is driven through modules that we’ve built, and it’s much more automatic.

"At the Super Bowl, you’re adding markets that you don’t have the rest of the year. The only way for you to post them is to do it fairly manually. And every single year, there’s a market that you haven’t done before that you have to work out."

Prop bets allow bookmakers to take a stand with their numbers. They also provide differentiation in a world in which most betting lines are the same.

For example, the Chiefs are consensus 3-point favorites on Sunday, while FOX Bet is dealing Chiefs -3.5 (+100). That half-point in the Super Bowl is about as big as the discrepancy will get across the core markets. You won’t see any shops offering Kansas City -4.5 or -5 unless the whole market moves that way.

Props are a different monster.

"There’s very little room for flexibility in the core markets," Blangsted-Barnor explained. "You can’t really maneuver off the market price. As a bookie, you will struggle to beat those core markets when they’re out of line.

"But in the prop markets, as much as it’s us sitting there pricing it manually, it comes down to understanding how football works while also understanding the stats.

"The one I love every single year – and it’s one I feel the bookies get wrong consistently – is whether a team’s first play will be a pass or a run," Blangsted-Barnor said. "What usually happens is that bookies will use either first-down percentages or all play percentages, but realistically, those aren’t representative of what teams do on the first play of the game. The Chiefs, for example, are a very pass-heavy offense, but they love to run the ball on the first play of the game. There’s usually some value to be found."

Settling on numbers and prices is much tougher than one would think. FOX Bet traders go back-and-forth until the exact number is universally accepted. Imagine being in the trading room while two guys are ready to wring each other’s necks over how many points Chiefs kicker Harrison Butker will score. (FOX Bet has Butker O/U 7.5 points.)

"A few years ago, we tried a prop for any kick to hit the upright," Blangsted-Barnor recalled. "We had three or four different people work it out, and everybody’s odds were really far away from each other.

"That was a classic example of something that nobody had priced before, and you’re trying to work out what the price should actually be. It’s quite the process."

Often in a Super Bowl, oddsmakers will be way off on a prop. After all, a good amount of these props are beatable with the proper homework and insight. Oddsmakers can’t possibly nail all 1,000 lines with dead-on accuracy. That’s impossible. You’ll see a receiver’s yardage prop at over/under 71.5 yards, and he’ll catch seven balls for 105 yards. It happens.

Sometimes, the books get lucky as winning bets flip to losers.

"It happened last year with Patrick Mahomes," Blangsted-Barnor remembered. "He was 'over' his rushing line and took three straight knees late in the final minute, which was enough to swing him back 'under.' He lost the best part of 20 yards taking those three knees because he needed to waste a little bit of time. Rather than taking straight knees, he dropped back and ran around before dropping down."

A check of the box score check confirms that Mahomes lost 15 rushing yards in the final minute of Super Bowl LIV. He was sitting on 46 yards entering the final drive but finished with 29 after those three negative rushes. His rushing yardage prop was being dealt anywhere from 32 to 36 yards in the market. "Over" morphed into "under" just like that.

"That was great for the house," Blangsted-Barnor admitted.

Believe it or not, not all props make it to market. American regulations vary state by state, and many states tend to reject non-traditional or non-sports-related wagers. Some prefer to stick to "football only" props, while others clearly fear inside information when it comes to non-football wagers.

"There’s plenty we can’t offer that I would love to have on the sheet," Blangsted-Barnor said with a laugh. "We aren’t allowed to run any negative markets. We wanted to offer any extra point to be missed. That wasn’t allowed. And then the non-sporting props, we can’t offer any of the halftime stuff. You’re betting on what the first song will be and what the singer might wear.

"There’s so much you can do with it, and it brings in a new audience. Another popular one that I don’t think we’re allowed this year is how long the national anthem will be. Regulations have stopped us from that as well, unfortunately."

FOX Bet pushed for the ever-popular Gatorade prop, which allows you to bet on what color the liquid that gets poured on the winning coach will be. It was rejected in Colorado, Michigan and Pennsylvania, but one state will join the postgame pour party.

"The Gatorade prop will go up in New Jersey very soon," Blangsted-Barnor reported. "It’s a really tough one to line. It used to be easier when teams were there often. With the Patriots, it was easy. If they were heavy favorites in the game, we knew what color they liked. Then, the one year they poured water (clear), and we didn’t have that option listed in the betting. That was real fun when it came to settlement.

"This year, orange is the favorite because that’s what the Chiefs did last year. They’re obviously favored, and odds are good that their tastes haven’t changed. You have a slight opinion, but it’s really a guess. We’re not really going off stats or anything.

"And we’re reacting to money, too. If big money suddenly comes in on blue or purple, chances are that somebody knows something we don’t, and we’ll make the adjustments."

I always wonder about the betting splits between the core markets and prop markets for a given Super Bowl. With more and more bettors entering the space every day, it’s interesting to think about the allocation of wagers. These numbers will vary at every sportsbook, but exactly what percentage of the wagers will be on side, moneyline and total compared to the prop bets?

"That’s really difficult to guess," Blangsted-Barnor said. "I think it’ll be more core-market-focused. If you’re a casual bettor, you’re more likely to stick to the side, moneyline and total. But there will be a lot on the props. There’s such a wide range of markets that it’s hard not to take a good amount of action.

"I would probably guess around [a 60/40 split]. We’ll take loads of money on the MVP market. Same with the coin toss. Some of those markets are always popular."

I've already pounced on the first-quarter under of 10.5 points, the first-half under of 27.5 points and an 8-to-1 flier on a scoreless quarter. Tom Brady has been part of three scoreless first quarters in his past six Super Bowls, so there's proof in the pudding that he has started more slowly of late. With injuries on the offensive line, Kansas City should have some sluggish drives, too.

Before I let Blangsted-Barnor off the hook on our 15-minute transatlantic phone call, there was one final question to ask. It’s arguably the most pressing question in the world of Super Bowl prop wagering.

"Tails never fails," Blangsted-Barnor quipped. "We’re actually going +100 on either side of the coin this year at FOX Bet. We’re taking no margin or vig on the coin toss. It’s a fun market. We want people to come bet the coin toss with us."