DETROIT - Pius Suter and Tyler Bertuzzi each had a goal and an assist, and the Detroit Red Wings beat the Vegas Golden Knights 5-2 Sunday night.

Detroit coach Jeff Blashill added: "(Greiss) was big when we needed him to be big."

Nicolas Roy had a goal and an assist, and Jonathan Marchessault also scored for the Golden Knights. Laurent Brossoit finished with 25 saves.

"I thought we pushed back hard in the second and third," Golden Knights coach Peter DeBoer said, "but it was just one of those nights. It’s always tough to win on the road, and it is even tougher with this many key injuries." 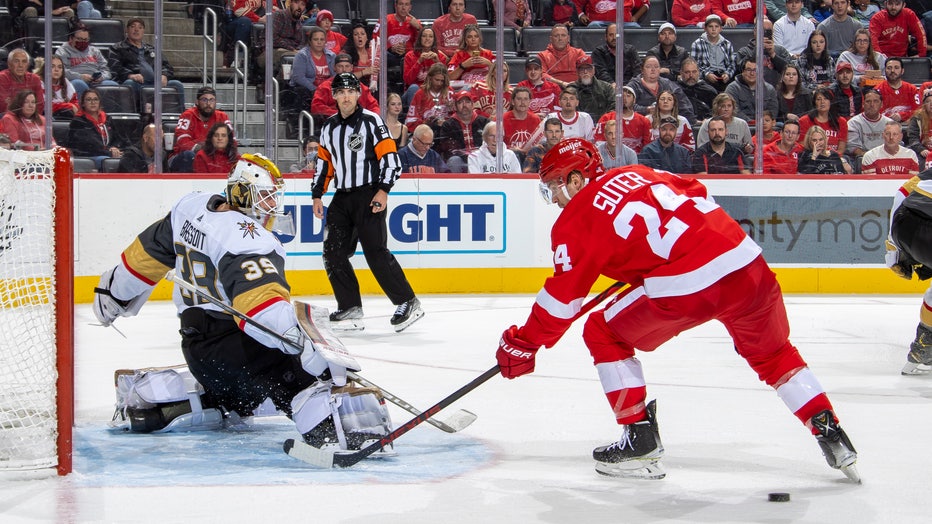 DETROIT, MI - NOVEMBER 07: Laurent Brossoit #39 of the Vegas Golden Knights makes a save on Pius Suter #24 of the Detroit Red Wings during the third period of an NHL game at Little Caesars Arena on November 7, 2021 in Detroit, Michigan. Detroit defea

After Roy gave Vegas the lead 3:48 into the game with his second of the season, Detroit scored the next four goals to take control.

Raymond tied it with the first of the Red Wings' two power-play goals, getting a pass from Bertuzzi and beating Brossoit from the left circle for his sixth at 8:17. The 19-year-old now has 14 points to lead all NHL rookies.

"Lucas is dangerous," Larkin said. "He’s crafty with the puck."

With Detroit on the man-advantage again, Fabbri scored from the right circle for his third with 9:47 remaining in the first.

The Red Wings finished 2 for 4 on the power play and went 3 for 3 on the penalty-kill.

Detroit also had 17 blocked shots to 11 by Vegas. Blashill said the Red Wings' penalty-kill is set up to block shots.

"It’s only successful if you block shots," he said.

Namestnikov gave the Red Wings a three-goal lead, scoring his fifth from a tight angle with 9:21 left in the second.

"That second period was probably our best stretch of hockey," Larkin said. "I think we out-worked them tonight. All 23 guys worked hard."

It was Larkin’s first game back after a three-game leave for personal reasons.

"It was so great to be back on the ice with the guys," he said.

Marchessault pulled Vegas to 4-2 with his sixth at 4:25 of the third, but Bertuzzi sealed it with an empty-netter with 10 seconds left for his team-leading ninth.

"I didn’t think our game was that bad, but those power-play goals just killed us," Marchessault said. "Both of their power-play units were really good. They were recovering pucks and creating chances. We have to do a better job staying out of the box."

Detroit on Sunday assigned center Joe Veleno, 21, to Grand Rapids of the AHL, and activated defenseman Gustav Lindstrom from injured reserve. Veleno, the Red Wings’ first-round pick in 2018 had one goal and one assist in four games since being recalled Oct. 30 from Grand Rapids.