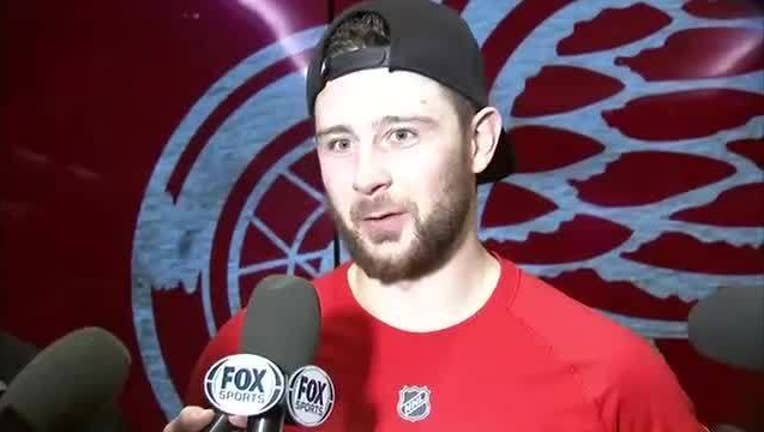 WASHINGTON (AP) - For a few moments, it looked as if the Detroit Red Wings were headed for another embarrassing loss. Then Tomas Tatar stepped up again.

Tatar scored his second goal of the game 2:47 into overtime, and the Red Wings escaped with a 5-4 victory over the Washington Capitals on Sunday.

Detroit had dropped three in a row. It blew a 5-2 third-period lead against the New York Islanders on Friday and lost 7-6 in overtime.

"A lot of people expected us to fold after a tough game," coach Jeff Blashill said. "I thought we got back up real well."

Tatar beat Braden Holtby for his 14th goal of the season. He also scored with 11 seconds to play in the second period to give Detroit a 4-1 lead.

Justin Abdelkader, Luke Glendening and Anthony Mantha also scored for the Red Wings, and Jimmy Howard made 23 saves in his first win since Jan. 5.

"It was tough. I was worried it might be the same story as against the Islanders," Tatar said. "You don't want that to happen. I felt really bad after the game. If you have two in a row like that, it would be just miserable."

Dylan Larkin, who assisted on both of Tatar's goals, felt the team stayed together after Nicklas Backstrom tied it for Washington with 17 seconds to play.

Alex Ovechkin scored his NHL-best 33rd goal for Washington, which was coming off a home-and-home sweep of Columbus. Brett Connolly, Dmitry Orlov and Backstrom scored in the third, and Holtby stopped 24 shots.

Ovechkin's 10th power-play goal made it 1-0 at 4:20 in the first period. Evgeny Kuznetsov picked up an assist on the play, extending his point streak to a team-high seven straight games.

The Red Wings responded with four straight goals, including three during a dominant performance in the second.

Abdelkader stole the puck at the red line and tied it at 1 with his ninth of the season at 13:37 of the first. Glendening and Mantha scored nine seconds apart in the second, and Tatar's first goal gave the Red Wings a 4-1 lead.

"It's not good enough. No one wants to play like that in the second," Washington center Jay Beagle said.

"We can't leave our goalie out to dry, and it's been happening a lot lately. They've been holding us in there and getting us wins, but it's starting to show now."

The Capitals pulled within one on goals by Connolly and Orlov. They had a two-man advantage when they pulled Holtby and Dan Dekeyser was called for holding with 1:15 left, and Backstrom tied it with his 13th goal.

NOTES: Washington coach Barry Trotz said F Lars Eller, who signed a five-year, $17.5 million contract extension Saturday, should be able to play more confidently. "Now, he knows he's going to be here," Trotz said. "It makes us strong up the middle." ... Detroit F Todd Bertuzzi, who committed a costly penalty that led to the Red Wings' ugly loss to the Islanders on Friday, was a healthy scratch.