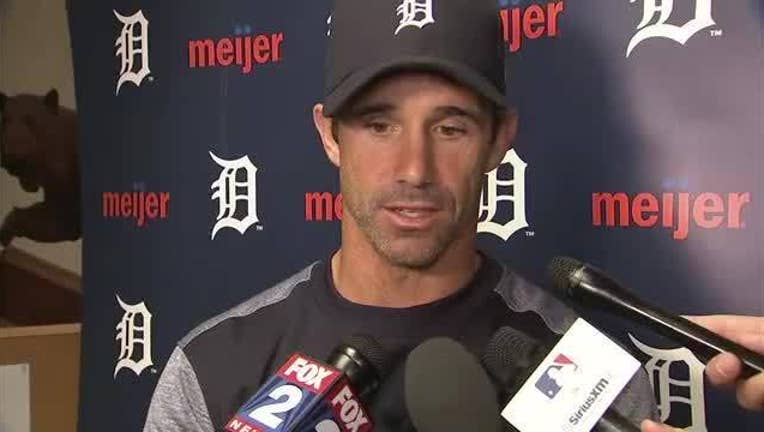 HOUSTON (AP) - Jake Marisnick wouldn't acknowledge whether he thought his tiebreaking home run in the bottom of the eighth inning had ended the game. His teammates, however, were teasing him in the clubhouse after the game about a nearly humiliating premature celebration while he was rounding the bases.

"I don't know what you're talking about," Marisnick said with a grin when asked about it. "No comment."

Either way, Marisnick hit Houston's fourth homer of the game to lift the Astros to a 7-6 victory over the Detroit Tigers on Thursday night.

The Tigers tied it 6-6 in the top of the eighth when Jose Iglesias doubled off reliever Luke Gregerson (2-1) to drive in Andrew Romine.

Marisnick's homer to deep center off Detroit reliever Alex Wilson (1-2) gave Houston the lead back. Ken Giles got the last three outs for his 13th save as the Astros won three of four from the Tigers.

Carlos Correa, Marwin Gonzalez and Juan Centeno all homered off Justin Verlander in Houston's five-run fourth that gave the Astros a 5-3 lead.

"We have a great team with a lot of talent, and our lineup is able to make adjustments to any type of pitcher so we can score some runs," Correa said. "It's really important."

Correa returned from two-game absence (illness) to hit his seventh homer of the season, a two-run shot off Verlander that pulled Houston to 3-2. One batter later, Gonzalez homered to right field with Evan Gattis aboard to put the Astros ahead. Centeno capped the scoring in the inning with a solo shot to left center.

"I let those guys elevate the balls on a night when the ball was flying pretty good," Verlander said. "It sucks when we score that many runs. It would have been nice for us to come back and win that game. I thought we had a good chance. It starts and ends with me."

It marked just the second time in Verlander's career where he allowed three home runs in a single inning. He allowed six runs and nine hits while walking four and striking out three in 5 2/3 innings.

Justin Upton's RBI single in the fifth pulled the Tigers within one, before Gattis' run-scoring double in the bottom of the inning extended Houston's lead to 6-4. Upton then homered, his ninth, in the seventh to pull Detroit within one again.

Detroit took an early lead in the second after Upton singled to score J.D. Martinez. Martinez extended the lead to 2-0 in the fourth with a homer off a curveball from Mike Fiers that he sent 430 feet onto the train tracks in left center.

The Tigers led 3-0 after Iglesias' RBI double in the fourth scored Alex Avila before the Astros took over the lead in the fourth.

"You hate to lose a lead and then you battle back and ultimately, lose the game - it's a little frustrating," Tigers manager Brad Ausmus said.

Astros manager A.J. Hinch said it was nice to get cleanup hitter Correa back in the lineup.

"When you have the middle of your order together it feels good," Hinch said. "You have a sense of calmness on the team when his presence is needed."

The Astros matched their season high with four homers, a feat they have accomplished four times this season. The Yankees and Orioles are the only other teams with four games of four homers this season. Houston had only two such games in 2016.

Tigers: C James McCann exited the game in the fourth inning after getting hit by a pitch on the left hand. McCann's pinkie appeared to be bleeding as he walked off the field. Avila, who injured his own hand on a catcher's interference play on Wednesday, entered the game for McCann. Detroit recalled C John Hicks from Triple-A Toledo to catch in Friday's doubleheader and placed McCann, who needed five stitches, on the 10-day disabled list.

Astros: C Brian McCann passed a concussion test Wednesday and expects to play Saturday, when he is eligible to return from the seven-day concussion disabled list. ... RHP Collin McHugh (elbow) threw off of a mound for the first time in his rehab on Thursday.

Tigers: RHP Buck Farmer was recalled from Triple-A Toledo to start the first game of Detroit's doubleheader against the White Sox on Friday. Farmer is 0-6 with a 6.84 ERA in 32 career appearances for Detroit. LHP Matt Boyd (2-4) will start the second game.

Astros: RHP Joe Musgrove (3-4) will make his 10th start this season, having allowed two runs or less in three of his last five starts.