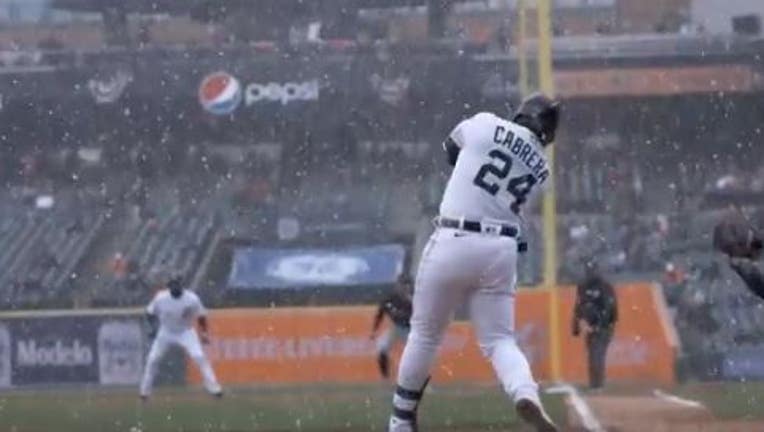 Miguel Cabrera hits his first homerun of 2021, a 2-run shot, on Opening Day in Detroit. Photo via screenshot from Detroit Tigers/Twitter

DETROIT (FOX 2) - The 2021 Detroit Tigers season is officially here and longtime first baseman Miguel Cabrera started it with a bang - literally - and it's a work of art.

The Tigers season opened Thursday against Cleveland at 1:05 p.m. and Cabrera wasted zero time putting Detroit in front. With Jeimer Candelario at first, Cabrera unloaded on a 1-1 pitch for the first home run of the season - for any team - but it didn't come easy.

Cabrera launched the ball to right but with snow flurries flying at Comerica Park, the umpires couldn't tell if it was gone or not. When he didn't see a signal from the umpires, he slid into second.

Then the umpires took a look at the review and saw that it did, in fact, just go over the yellow line but it hit the railing just beyond the fence, forcing the ball back into the field of play.

It was officially confirmed as a homerun, Cabrera's 488th, putting the Tigers up 2-0 in the first. And it was beautiful.

After Cabrera's 2-run shot in the first, Jacoby Jones added an RBI double in the second and that was it for scoring for either team.

Tigers closer Gregory Soto gave up a 2-run shot to Roberto Perez in the top of the 9th. After the homerun, he got Andres Gimenez to ground out but then walked Ben Gamel. That brought Cleveland's second baseman, Cesar Hernandez, to the plate with a chance to tie or take the lead.

According to MLB, this is Cabrera's third Opening Day homer but just his first since 2008 - 13 years ago - which was his first as a Tiger.

The 37-year-old is five homeruns shy of tying Lou Gehrig and Fred McGriff for 28th on the career list.

At first pitch, the temperature was only 30 degrees and expected to climb to only 33 by the time the game ends.

But hey - at least the snow we saw this morning is gone. Ope.