COLUMBUS, Ohio - While being led to the Ohio Stadium visitors dressing room through a crowd of Ohio State fans raining abuse on him, Shea Patterson looked up and retorted.

“We’ve got you next year at our place,” the Michigan quarterback shouted before disappearing into the tunnel after the Wolverines had lost The Game for the fourth straight time in the Jim Harbaugh era.

Now comes the put-up-or-shut-up chance for Patterson, who is in his second year leading Michigan after transferring from Ole Miss. He spent his early years in Toledo, Ohio, as a huge Wolverines fan, so he who knows the significance of this game.

“Just the word Ohio State means everything for us,” Patterson said.

To get his one and only career win in an Ohio State-Michigan game, he’s going to have to outplay another quarterback who has found an ideal home via transfer: Justin Fields, whose cool approach helped the second-ranked Buckeyes survive fumbles at critical times to beat Penn State 28-17 last Saturday and remain undefeated and on course for a playoff berth. Growing up in Kennesaw, Georgia, and spending his freshman year at Georgia, Fields knows less about The Game, but he’s quickly getting it, especially after hearing coach Ryan Day talk about it all season long.

While Fields finally got a chance to show how stout he can be in a tight game for the Buckeyes, Patterson is playing his best football of the season, clicking just in time in a no-huddle, spread offense for the 10th-ranked Wolverines under first-year offensive coordinator Josh Gattis. 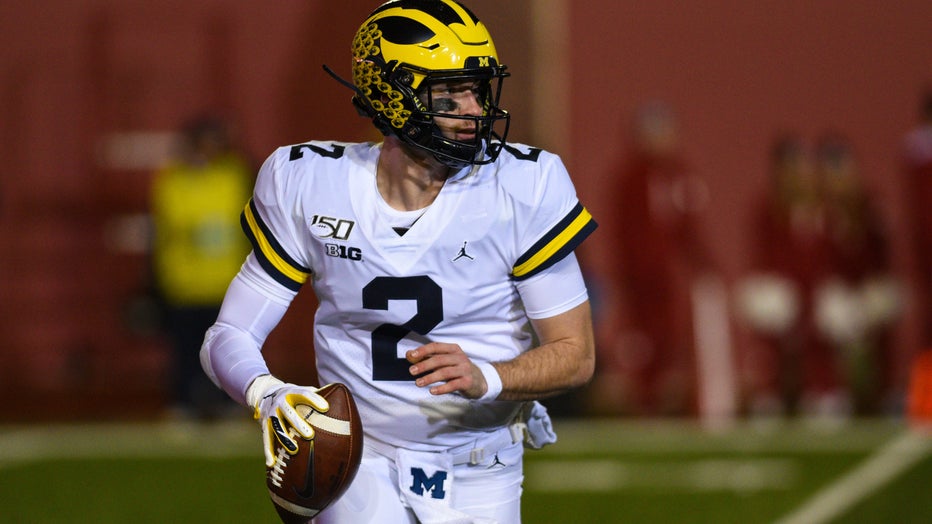 BLOOMINGTON, IN - NOVEMBER 23: Michigan (QB) Shea Patterson (2) during a college football game between the Michigan Wolverines and Indiana Hoosiers on November 23, 2019, at Memorial Stadium in Bloomington, IN.(Photo by James Black/Icon Sportswire via

Patterson won Big Ten co-offensive player of the week for the second straight week after throwing for 366 yards and five touchdowns in Michigan’s 39-14 win over Indiana, becoming the first quarterback in school history with five touchdown passes in regulation.

Combined with the previous week’s 44-10 rout of Michigan State, Patterson completed 44 of 65 pass attempts for 750 yards, nine touchdowns and one interception.

“We’re riding him,” Harbaugh said. “His play has just been outstanding. He is really seeing the field well. He’s taking care of the football at all times.”

Fields, who transferred from Georgia in January, has been a revelation for Day, who oversaw Dwayne Haskins Jr.’s record-breaking season last year before going to the NFL as a first-round pick.

Because he didn’t play in the second half of blowouts - which Ohio State’s first 10 games were - Fields’ numbers aren’t gaudy as say those of LSU’s Joe Burrow or Washington State’s Anthony Gordon. But he’s accurate, highly efficient, runs the ball like a tailback and is simply unflappable. He’s completing 72.7% of his passes and has thrown 33 touchdown passes against a single interception while rushing for 10 more scores.

In his first four-quarter game against Penn State last week, he experienced some adversity for the first time, fumbling away the ball while crossing the goal line in the first quarter and coughing it up again in the second half. That turnover led to a Penn State field goal that pulled the game to within 21-17.

Fields responded with a 28-yard touchdown pass to Chris Olave late to seal it. He also created some tense moments in the fourth quarter and was slow to get up. He appeared to be shaken up, but Day said he’s good to go for Michigan.

“His ability to get the ball downfield has been a lot better,” Olave said. “He overthrew a couple of receivers earlier in the year. Now he’s got it underneath him, and he’s putting the ball on us to let us make a play. So he’s got a lot of game time and a lot of toughness and grit, and we saw it Saturday. he took a lot of hits and he bounced right back. That’s what we love about him.”