SOUTHFIELD, Mich. (FOX 2) - The eyes of the NCAA football world are on East Lansing on Saturday for the showdown between Michigan and Michigan State - both undefeated and both in the top ten - and you could be on national TV on FOX's Big Noon Kickoff.

FOX Big Noon Kickoff host Rob Stone - alongside college football legends Reggie Bush, Matt Leinart, Brady Quinn, and Bob Stoops - airs live starting at 10 a.m. but you need to be there much earlier than that if you want to be part of the audience on national TV.

The show will broadcast live from the STEM Facility in the southeast corner of Spartan Stadium and you're encouraged to bring your school spirit starting at 9 a.m. - whether you're a Wolverine or Spartan, show up and be loud!

Michigan will battle Michigan State for the Paul Bunyan trophy - which is currently in East Lansing after MSU's stunning upset last year in Ann Arbor.

The biggest pregame party of the weekend will give fans a chance to win tickets to the game, plus there will be free food and merchandise, celebrity guests, live music, and so much more.

FOX Big Noon Kickoff airs live between 10 a.m. and noon - which is when the highly anticipated matchup will kickoff from East Lansing. If you can't make it to Spartan Stadium for the show, you can watch it and the game LIVE on FOX 2.

The rivalry is steeped in tradition - especially over the past two decades. Read more about Tom Brady, Trouble with the Snap, and 21-point underdogs. 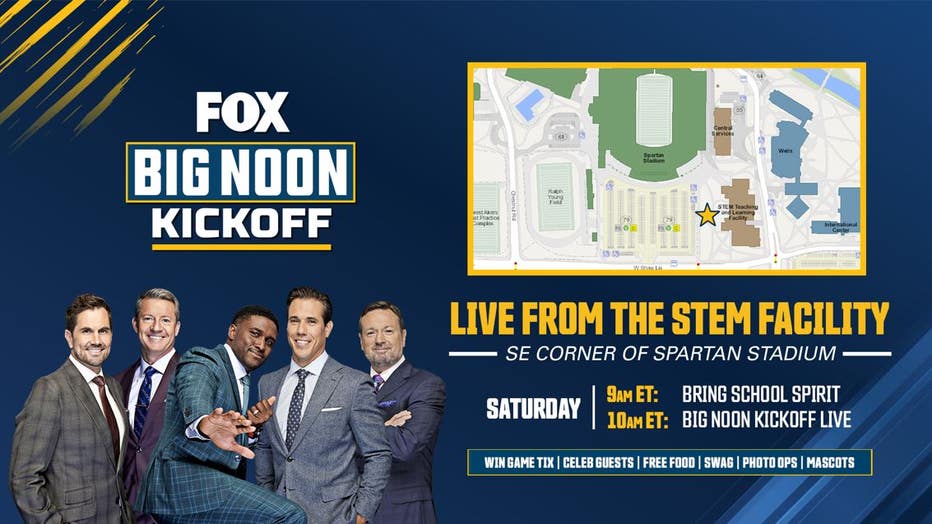