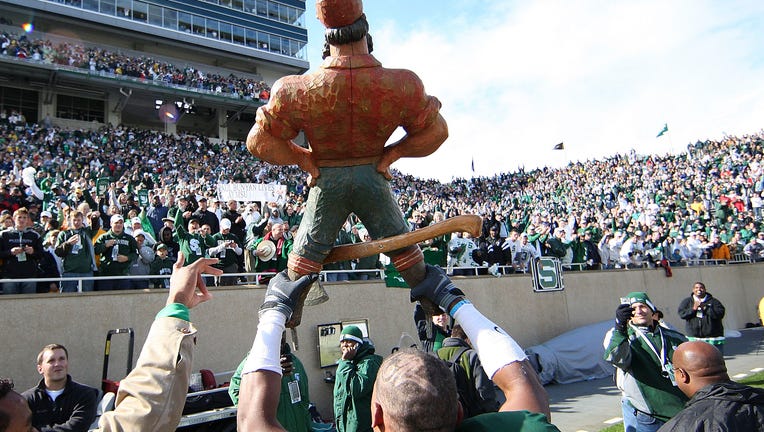 EAST LANSING, MI - OCTOBER 03: Brendan Gibbons #34 of the Michigan State Spartans hoists the Paul Bunyan trophy awarded to the winning team each year after the Spartans defeated the Michigan Wolverines 26-20 at Spartan Stadium on October 3, 2009 in E

Sure bragging rights are cool, but wouldn't hoisting a wooden man with a beard and bulging arms be much cooler?

From a pig to a brass spittoon, to a little brown jug and man-sized axe, the traditions of college football swing from the eyebrow-raising to the downright weird. But none of the teams competing for those trophies shares the same state like the two that battle for Mr. Bunyan.

Hands at his hips, eyes on the horizon, and a stance that only a lumberjack could plant, Paul Bunyan is the true sign of achievement in Wolverine-Spartan lore as the prize that awaits the winner.

RELATED: How to watch the Michigan State vs. Michigan football game this weekend

The tale of how the Paul Bunyan Trophy came to signify one team's dominance over the other starts in 1953 when the Michigan governor at the time introduced it as an offering to Michigan State University, who entered the conference that year.

"Celebrate your win with this wooden statue of a fictional lumberjack!" Gov. G. Mennen Williams probably told the teams at the time. Probably.

The decision to immortalize Paul Bunyan comes from Michigan's history as a logging state, long a location with ample wood supplies that helped grow the developing U.S. in the 1800s. While many believed its lumber resources would last for decades, the industry trimmed that estimation down to about 20 years. By 1890, most of its trees had been cut.

It wasn't a pretty rivalry when the series started competing for folklore fiction. MSU won 13 of the first 17 meetings since 1953, backed by dominance from Spartan coach Duffy Daugherty. The Wolverines returned the favor beginning in 1970, going on an eight-game win streak against MSU and winning 13 of 14 games between the two.

RELATED: Tom Brady, Trouble with the Snap, and 21-point underdogs: The past two decades of the Michigan-MSU rivalry

Things evened out for a bit over the next few decades with U-M maintaining control over the series. It wouldn't be until 2008 when MSU reclaimed a winning streak and a majority of the wins against U-M, as well as ownership over Paul Bunyan.

Michigan State currently has the trophy after an improbable victory in Ann Arbor last year during Mel Tucker's first year as the Spartans head coach. The upcoming matchup will be the first game the two teams will play as top 10 ranked competitors in almost 60 years.