DETROIT - Vitek Vanecek made 32 saves and blanked Detroit for 58 minutes as the New Jersey Devils downed the Red Wings 5-1 on Wednesday night.

Dougie Hamilton, Nico Hischier, Alexander Holtz and Jack Hughes each had a goal and an assist. Michael McLeod also scored for New Jersey. 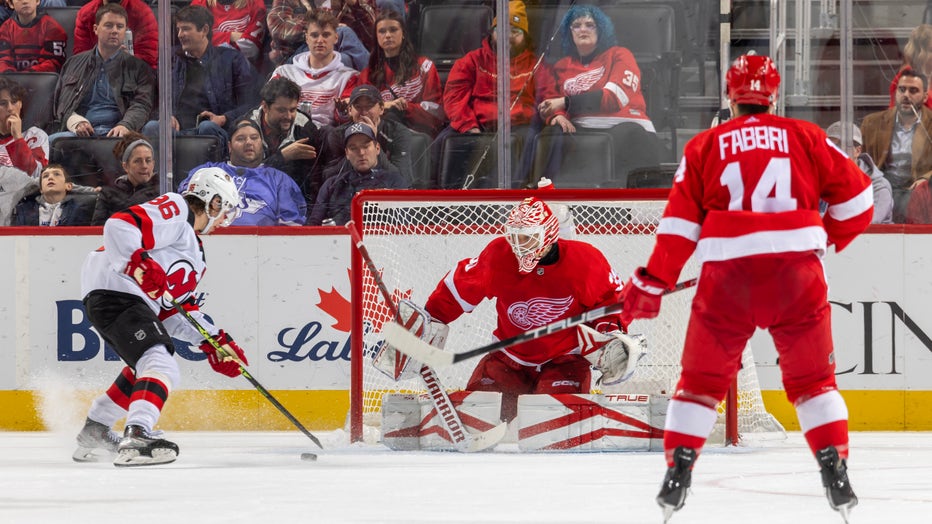 DETROIT, MI - JANUARY 04: Jack Hughes #86 of the New Jersey Devils stick handles the puck next to Ville Husso #35 of the Detroit Red Wings during the third period of an NHL game at Little Caesars Arena on January 4, 2023 in Detroit, Michigan. New Jer

Detroit forward Robby Fabbri made his season debut. He tore the ACL in his right knee in March.

Just five seconds after Detroit's Ben Chiarot was sent to the penalty box for tripping, Hamilton broke a scoreless deadlock midway through the second period on a slap shot. Hughes and Hischier were credited with assists.

The second New Jersey goal later in the period was nearly a carbon copy. With Jake Walman in the penalty box for tripping, Hamilton took a shot from the point that Hischier redirected past Husso.

The Devils made it 3-0 two minutes into the third. Husso stopped Miles Wood's shot on a 2-on-1, but the Detroit goaltender couldn't recover in time when Holtz pounced on the rebound and passed the puck to McLeod.

Two seconds after the Red Wings killed off another tripping penalty, Holtz flicked a shot from the slot over Husso's shoulder.

NOTES: The Red Wings assigned LW Jakub Vrana to the Grand Rapids Griffins of the American Hockey League after he cleared waivers. Vrana played three games for the Griffins on a conditioning loan prior to being waived. He has spent most of the season in the player assistance program, set up by the NHL and NHL Players’ Association. ... Hamilton has 24 points in 32 career games against Detroit. ... New Jersey is 19-0-1 when leading after two periods.