The Blues recalled Walker from their AHL affiliate, the Springfield Thunderbirds, under emergency conditions Wednesday. The 27-year-old Walker, from Wales, had previously dressed in 25 NHL games, recording three goals and two assists.

Lindgren made his first start since March 7, 2020. He is fourth on the Blues' depth chart. The 27-year-old saw his first NHL action in almost two calendar years on Tuesday and made three saves in 6:25 of relief duty.

Robby Fabbri had both Detroit goals. 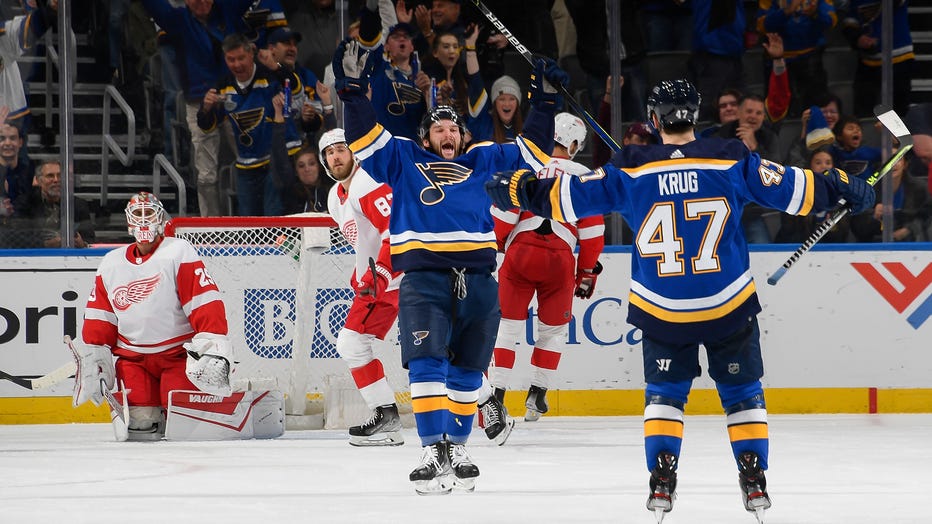 ST. LOUIS, MO - DECEMBER 9: Nathan Walker #26 of the St. Louis Blues reacts after scoring his third goal of the game against the Detroit Red Wings at the Enterprise Center on December 9, 2021 in St. Louis, Missouri. (Photo by Scott Rovak/NHLI via Get

Walker scored twice in the first period, almost matching his career total coming into the game. He added his third goal in the final period.

Walker scored at the 6:17 mark for a 1-0 lead. Brayden Schenn won a puck along the boards and Walker picked it up. His wrist shot from the top of the right circle went through the pads of goalie Alex Nedeljkovic.

His second goal came at 16:47. Niko Mikkola skated with the puck into the zone and dropped it back to Walker. Skating into the left circle, his wrist shot beat Nedeljkovic on his glove side.

Each team scored a goal in the second period.

The Red Wings cut the lead to 2-1 when Fabbri scored from the right circle at 4:17. St. Louis got it back when Parayko tapped in a loose puck behind Nedlejkovic, who couldn’t corral a shot by Mikkola, at 16:01.

Detroit switched to Thomas Greiss in net for the third period. Nedlejkovic stopped 16 of 18 shots.

Two goals in 38 seconds in the final period put the game out of reach. First, Walker deflected a shot by Torey Krug at 9:27 for his hat trick. St. Louis made it 5-1 on a goal by Barbashev at 10:11. Barbashev has six goals in his last seven games.

Detroit got its final goal when Fabbri scored at 15:27.

Scandella added an empty-netter to complete the scoring.

Blues: Signed goaltender Jon Gillies to a one-year, two-way contract. Gillies, 27, has appeared in four AHL games overall this season, including three with Providence and one with Lehigh Valley. The 6-foot-6, 223-pound goalie and Concord, New Hampshire, native has made 12 career NHL appearances, going 4-5-1 with a 2.71 goals-against average and a .903 save percentage.

Blues: G Jordan Binnington, D Justin Faulk and C Tyler Bozak are on the COVID-19 protocol list. They are the seventh, eighth and ninth players on the team to miss games this season for St. Louis under the NHL’s protocol. Bozak is due to come off the list Friday and could play Saturday. Binnington and Faulk come off on Sunday.

The Red Wings play at Colorado on Friday.

The Blues will host Montreal on Saturday.