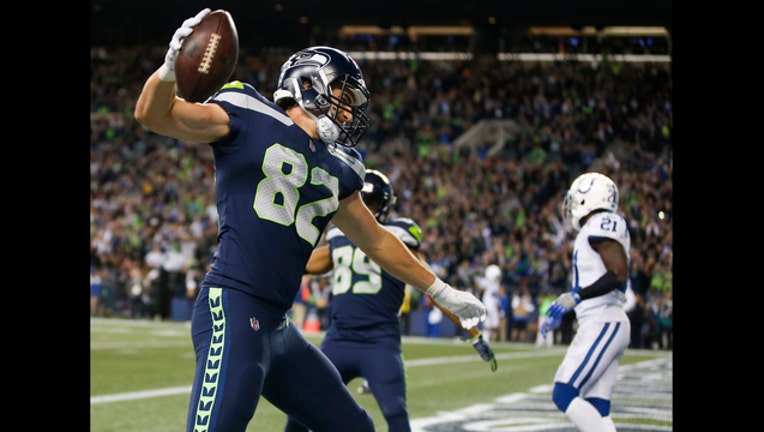 SEATTLE, WA - OCTOBER 1: Tight end Luke Willson #82 of the Seattle Seahawks spikes the ball as he celebrates his touchdown against the Indianapolis Colts in the fourth quarter of the game at CenturyLink Field. (Photo by Otto Greule Jr /Getty Images)

ALLEN PARK, Mich. (AP) - When you play for the Detroit Lions, you can be from Canada and still be considered local.

Luke Willson, a tight end who signed with the Lions two months ago after five seasons with Seattle, is from Windsor, Ontario, right across the Detroit River from the Motor City. He grew up a Lions fan, although that's not his only motivation to play well after returning to the area.

"I was a big Barry Sanders guy. When I was a kid, it was kind of like the Herman Moore, Barry Sanders," Willson said this week. "I was a youngster, but I've always kind of, you know, liked the Lions growing up. But that being said I think it's important for me to establish a divide. Yeah it was my childhood team, but I'm here to do a job."

It's been a fairly quiet offseason for the Lions where free agency is concerned, but Willson was an interesting pickup, especially after Detroit cut ties with tight end Eric Ebron. A former first-round draft pick, Ebron became a target for Lions fans for dropping passes, but he did provide production that Detroit needs to replace. He caught 186 passes over the past four years, including 53 for 574 yards and four touchdowns last season.

In five seasons with Seattle, the 6-foot-5 Willson never had more than 22 catches, but the Seahawks have had other tight ends to throw to like Jimmy Graham and Zach Miller, so Willson may be capable of more.

"I really try to pride myself on being able to do whatever they ask," Willson said. "You know, my first year we had Zach Miller, I was more the down-the-seam tight end, and Zach got hurt and you know, I had to quickly learn to be more the hand-down type guy. I think that's kind of benefited me in my career because I feel comfortable doing whatever they ask me to do."

Willson said at this stage of the offseason, it's too early to tell what exactly his role will be with the Lions.

"I'm here to do whatever the coaches ask me and right now, you know with all the CBA rules, it's personally just about getting better each day," he said. "A lot of individual stuff for me that I can get better and just showing the coaches what I can do, and then from there they'll decide what role I'll be playing this year."

Despite the proximity to the U.S., Willson said the quality of high school football where he grew up wasn't great. He played on a summer team he likened to AAU basketball. He ended up playing college football at Rice, and he was drafted by the Seahawks in the fifth round in 2013.

He has carved out a decent NFL career for himself since then, and now he has a chance to come back and play close to home - although it sounds like he'll be living on the Detroit side of the river now.