Patterson threw for 366 yards and five touchdowns, leading the 12th-ranked Wolverines to their fourth straight victory - 39-14 over Indiana on Saturday.

“We’re riding him,” Michigan coach Jim Harbaugh said. “His play has just been outstanding and he’s really seeing the field well. He’s taking care of the football at all times and really playing good, disciplined football.”

Over the past two weeks, Patterson has thrown nine touchdowns passes. Over the last three games, he has 12 touchdown passes and one interception.

And the resurgent Wolverines (9-2, 6-2 Big Ten) are making it look easy, too. They’ve won seven of eight, the last four by margins of 25 or more, and extended their winning streak over the Hoosiers to 24 games. 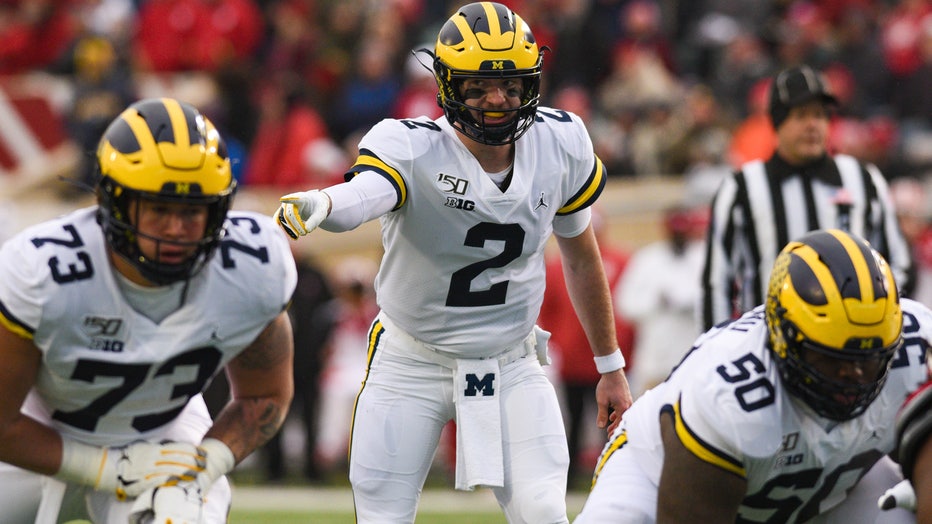 BLOOMINGTON, IN - NOVEMBER 23: Michigan (QB) Shea Patterson (2) during a college football game between the Michigan Wolverines and Indiana Hoosiers on November 23, 2019, at Memorial Stadium in Bloomington, IN.(Photo by James Black/Icon Sportswire via

But as well as Patterson has played recently, he couldn’t do it without some help from his receivers.

Nico Collins turned three of his six receptions into scores, a career high, and had a career-best 165 yards. Donovan Peoples-Jones had five catches for 73 yards and scored on a spectacular, spinning 11-yard TD catch in the first half. Giles Jackson’s only catch went for 50 yards and Ronnie Bell caught a 6-yard TD catch, the first of his career.

It was that kind of day for the Wolverines.

“They've got size and a lot of speed to go along with that,” Indiana coach Tom Allen said. “But we’ve got to win some of those one-on-one match-ups. They were just better than us today.”

Michigan’s defense was just as impressive.

After giving up 1-yard touchdown runs in the first half to Steve Scott III and Peyton Ramsey, the Wolverines didn’t allow another score.

The Hoosiers (7-4, 4-4) weren’t the same after Ramsey appeared to take a hard shot to the midsection. He stayed down on the field for several minutes before walking off, returned on the next series and led the Hoosiers to their second score but never got Indiana close again. The Hoosiers have lost two straight since clinching their first winning season in 12 years.

“He got hit pretty hard, but he’s a tough old kid now, so I don't think it affected him,” Allen said. “If it didn't he never said anything. He's going to be fine.”

After Scott opened the game with his 1-yard scoring run, Patterson hooked up with Ronnie Bell for a 6-yard TD pass to tie the score. Donovan Peoples-Jones tied it at 14 with a spectacular, spinning 11-yard TD catch.

Then Patterson gave Michigan its first lead with a perfect 24-yard scoring strike to Nico Collins with 5:33 left in the first half, Quinn Nordin’s 24-yard field goal made it 24-14 and the Wolverines sealed the victory with a 76-yard TD pass from Patterson to Collins and Dylan McCaffrey’s conversion run midway through the third.

Michigan: The Wolverines couldn’t feel any better heading into next weekend’s showdown with No. 2 Ohio State. They’re playing their best ball of the season and have steadily built momentum.

Indiana: This wasn’t just another loss to Michigan. It was humbling and costly. In addition to Ramsey’s injury, left tackle Matthew Bedford and Scott were injured on the same play with 40 seconds left in the third quarter. Bedford was carted off the field while Scott limped off.

Michigan: Penn State’s loss may give the surging Wolverines a chance to crack the top 10, just in time for their biggest game of the season.

Indiana: Saturday’s rout ends any hope of the Hoosiers returning to the Top 25.

“We were all in the locker room (talking about Ohio State). We weren't even talking about this game," Michigan defensive end Aidan Hutchinson said.

Michigan: Will be at home trying to snap a seven-game losing streak against the Big Ten East champion Buckeyes next Saturday.

Indiana: Makes the short trip to rival Purdue with visions of winning back the Old Oaken Bucket for the first time in three years.