NEW YORK - Josh Donaldson hit a 10th-inning sacrifice fly, and the New York Yankees came from behind twice to beat the Detroit Tigers 5-4 on Sunday to reach the one-third mark of the season at 39-15, the best in the major leagues in 21 years.

Joey Gallo’s two-run homer in the fifth off overcame an early deficit and the Yankees won for the 10th time in 12 games, completing a three-game sweep of the Tigers and extending their winning streak to six. Their 39-15 record is the winningest after the season’s first third since the 2001 Seattle Mariners were 42-12.

"Just a lot of guys with a hand in the victory again," manager Aaron Boone said.

Anthony Rizzo tied the score 4-4 in the eighth after he was hit near the left knee by a bounced pitch, stole second and continued to third when second baseman Jonathan Schoop allowed the ball to bounce of his glove for an error. Rizzo slid home. 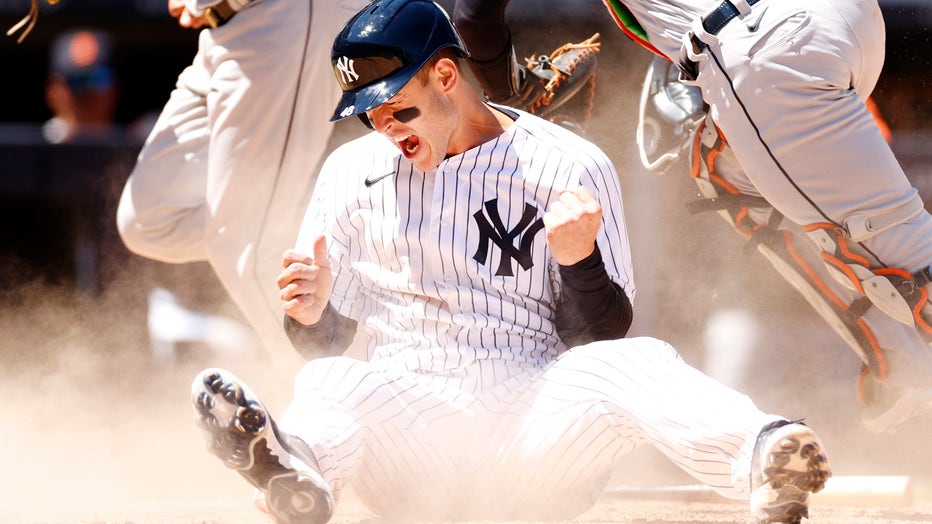 NEW YORK, NEW YORK - JUNE 05: Anthony Rizzo #48 of the New York Yankees reacts after sliding safely into home to score on an error and tie the game during the eighth inning against the Detroit Tigers at Yankee Stadium on June 05, 2022 in the Bronx bo

"It’s nice always whenever you can impact a game in a big way," Rizzo said. "I think our pitching and defense has been outstanding. It just allows all of us to play free and just play baseball."

With Aaron Judge as the automatic runner in the 10th, Rizzo reached on an infield single off off Gregory Soto (2-3) that Schoop knocked down on the right side of second. Donaldson followed with a drive to the left-field warning track for his 13th big league walkoff, his second this year and the Yankees’ sixth.

"I’m just trying to find the barrel at that time to be able to get a ball hopefully up in the air," Donaldson said. "He’s a tough guy to elevate just because he throws 100 (mph), he’s got a nasty slider and he throws a sinker."

Yankees starter Jordan Montgomery allowed two runs and five hits in 6 1/3 innings. New York ended a streak of five straight games allowing one run or fewer, its most since six in a row from Sept. 24-30, 1978.

Detroit’s Miguel Cabrera had his 245th game of three hits or more and reached four times. His tying single off Miguel Castro in a two-run eighth was his 3,036th hit. Pinch- runner Kody Clemens — son of Roger — scored on Javier Báez’s single under Rizzo’s glove at first for a 4-3 lead.

Torres had scored for a 3-2 New York advantage in the seventh when Alex Lange walked DJ LeMahieu with the bases loaded.

Báez hit an RBI double and scored on a single by Daz Cameron as the Tigers took a 2-0 lead in the fourth.

"They outplayed us at the game, they outexecuted us and they are a winning team," Detroit manager AJ Hinch said. "At the end of the game, its gets more magnified when you missed some opportunities."

Detroit starter Rony García allowed Gallo’s homer over four innings against the team who left him unprotected in the 2019 winter meeting draft.

Aaron Hicks was 0 for 2 with runners in scoring position, dropping to 4 for 35 RISP this year. ... Gallo, hitting .176, was booed when he took a called third strike with the bases loaded in the seventh. Gallo’s homer was his first 13 games, the sixth-longest drought of his big league career.

Tigers: 3B Jeimer Candelario (left shoulder) left in the second after trying to make a diving catch on Donaldson’s double. … LHP Eduardo Rodriguez (sprained left ribcage) threw a bullpen session Sunday and could begin a rehab stint with Triple-A Toledo later this week. … OF Austin Meadows (vertigo) homered in a rehab game for Toledo Saturday and could return Tuesday. Meadows has been on the IL since May 16. … RHP Tyler Alexander (sprained left elbow) pitched two innings in Triple-A Toledo Saturday. … OF Robbie Grossman (strained neck) could start a rehab assignment on Tuesday.

Yankees: RHP Jameson Taillon (6-1, 2.30), who retired the first 21 hitters Thursday against the Angels, opens a three-game series on Tuesday at Minnesota.