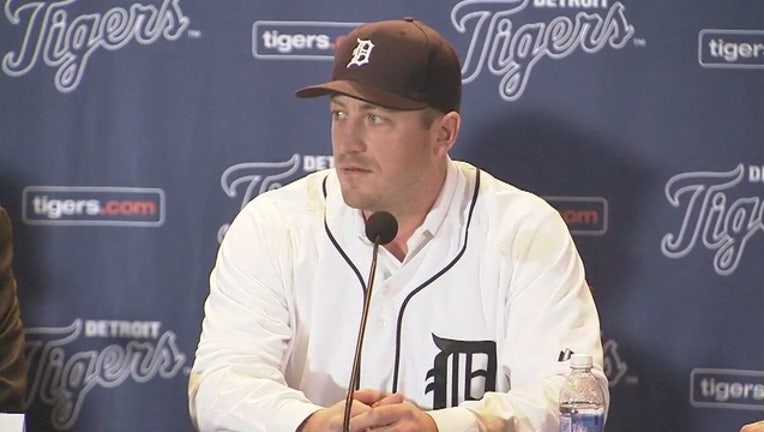 PITTSBURGH (AP) - Jordan Zimmermann pitched six shutout innings, Nick Castellanos homered and drove in four runs and the Detroit Tigers remained unbeaten on the road with a 7-4 win over the Pittsburgh Pirates on Thursday.

Zimmermann (2-0), who signed a five-year, $110 million deal with Detroit last December, gave up six hits and two walks while striking out four. He has yet to give up a run for the Tigers, who won the final three games of the interleague series and improved to 4-0 away from Comerica Park.

Castellanos hit a two-run double in the fourth off Gerrit Cole (0-2) and added a two-run homer in the eighth off Tony Watson. Francisco Rodriguez pitched a perfect ninth for his second save.

Cole gave up two runs in six innings and survived a scare when a liner from Zimmermann glanced off his head in the sixth.

The Tigers have scored at least four runs in each of their first eight games, tying for their best offensive start since 1913.

David Freese and John Jaso had three hits each for Pittsburgh, which left 12 runners on base.

Zimmermann wasn't quite as sharp in his second start for Detroit as he was in his sparkling debut last week against the Yankees, when he surrendered just two hits over seven innings. He labored at times but wriggled out of trouble when required.

The Pirates left the bases loaded twice, most maddeningly in the fifth when three singles put Zimmermann in a jam with the middle of the order up. Starling Marte, however, popped out and Gregory Polanco couldn't take advantage after jumping ahead 3-0 in the count. He flied out to shallow center as Zimmermann preserved a 2-0 lead before Detroit's offense went to work against Pittsburgh's bullpen.

Tyler Collins hit an RBI double and Bobby Wilson hit a sacrifice fly off reliever Rob Scahill to put the Tigers up 4-0. Pittsburgh drew within one after Zimmermann exited, tagging Drew VerHagen for three runs in the seventh. Detroit responded immediately thanks to a rare shaky outing by Watson.

J.D. Martinez's sacrifice fly made it 5-3 and Castellanos followed with a shot a few rows deep into the sun-splashed bleachers in left field at PNC Park.

Cole, wobbly in his first start last Saturday in Cincinnati, retired the first nine batters before briefly coming undone in the third. Justin Upton, who reached on a fielder's choice, went to third when an attempted pickoff throw by Cole went awry because no one was covering first.

Martinez worked a walk to put runners on the corners and Castellanos doubled over Andrew McCutchen's head in center to give the Tigers a lead they would never relinquish.

Tigers: Pitcher Blaine Hardy will continue his rehab from a left-shoulder impingement at Triple-A Toledo. Hardy, who has been on the disabled list since March 25, allowed posted a 6.00 ERA with six strikeouts in two appearances for Class A Lakeland. ... OF Cameron Maybin, recovering from a fractured left wrist, is hitting just .143 on his rehab assignment with Toledo.

Pirates: Put left-handed reliever Cory Luebke on the 15-day disabled list with tightness in his right hamstring and recalled Scahill from Triple-A Indianapolis. Luebke, who made the team as a non-roster invitee to spring training, is back in the majors for the first time since 2012 after going on a pair of Tommy John surgeries on his left elbow. Luebke has an 8.10 ERA in three appearances.

Tigers: Detroit heads to Houston for a three-game set on Friday. Mike Pelfrey will look for a better outing than his 2016 debut, when he gave up six runs in 3 2/3 innings against the Yankees.

Pirates: Pittsburgh opens a three-game series against Milwaukee on Friday. Jeff Locke will make his second start of the season for the Pirates. Locke allowed one run in six innings last Sunday in Cincinnati. The 28-year-old is 5-4 with a 3.75 ERA in 12 starts against the Brewers.