(FOX 2) - Has your shovel gotten dusty? The snowblower covered with cobwebs? Well, time to pull them out - we're gonna need them this weekend.

A Winter Storm Warning has been issued for all of southeastern Michigan beginning 10 p.m. Friday until 12 p.m. Saturday.

The largest snowstorm we've seen since the Veterans Day storm in November is on track for Saturday. The storm will drop a lot of snow pretty fast and it's likely to pile up.

This will, of course, mean snow as the primary form of precipitation (until we get into the afternoon hours on Saturday).

Beginning at 2 a.m. Saturday the snow will start to fall all throughout southern Michigan - and it will be intense at times. By the time we wake up Saturday morning, several inches will already be on the ground.

The FOX Futurecast for 3 a.m. Saturday

Snow continues to fall until about noon - and by that point we expect most people to have nearly 5.5" that they have to shovel.

By noon, a change over to rain is expected, especially for southern communities.

The FOX Futurecast for 12 p.m. Saturday

Areas north near Flint may see more of a sleet-y mix, but as the warmer air infiltrates the system we expect accumulating snow to end.

However, area-wide totals between 4-7" will happen for most of southern Michigan despite the change to rain later in the day. 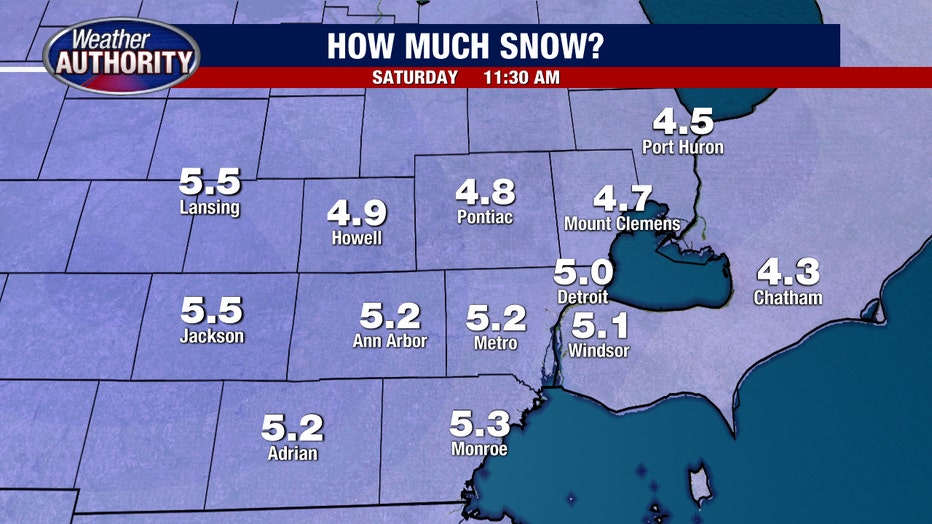 By Saturday night the temps will fall again, meaning an icy Sunday is on tap. Wind chills are expected to be near 15 degrees throughout the day Sunday.

Keep an eye on the radar and stay up-to-date with the latest forecast with the FOX 2 Weather app.