Arrest made after drivers shut down busy Detroit intersection with donuts, ring of fire

Detroit police said they have arrested one person involved in a dangerous driving incident captured on video. Numerous cars did donuts at 7 Mile and Greenfield, blocking the busy intersection.

DETROIT (FOX 2) - A Detroit man is in custody in connection with a wild scene involving stunt driving and drifting on the city's west side.

Early Monday, drivers gathered at the intersection of 7 Mile and Greenfield, where they did donuts around a ring of fire, right in front of a police officer.

WATCH: Drivers do donuts around fire right in front of Detroit police

"Detroit Police Department takes it very seriously. Again, they sent it directly to me. I was called in on Monday morning, and they said, ‘Hey, we got a problem. It’s drag racing, drifting,'" Cmdr. Eric Decker said. 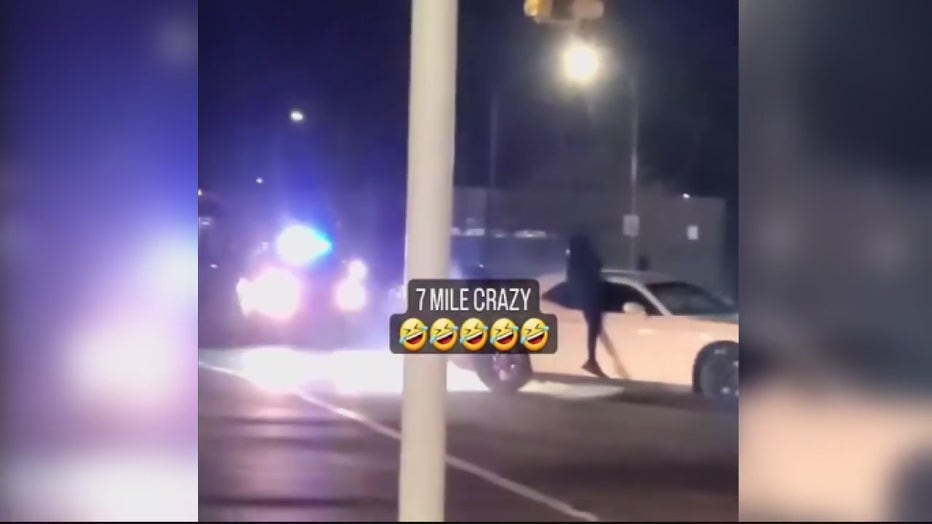 Police aren't identifying the man they arrested, but they did say he is a 31-year-old Detroit resident. Other videos and tips led to his arrest.

"Fortunately, in this specific instance, no one was injured. Not in the past. We’ve had people killed doing this drag racing, drifting. We’ve had officers that were hit by cars. We’ve had officers unfortunately fire shots at people. When you look nationwide, people are dying because of this," Decker said.

Decker said police are searching now and didn't intervene at the time because it's a lose-lose situation if they aggressively try to stop it and someone gets hurt.

This kind of behavior isn't uncommon in the area. Aaron McCray, who lives near the intersection, said the sounds of tires screeching have filled the neighborhood since the summer.

"They meet up. What they’re doing is, essentially, making a strip for them to speed off," he said.

McCray said he worries that people could get hurt.

"I’d like to make a serious deterrent for people to look at it and go, ‘oh, this wasn’t just a whole lot of fun, people are going to prison," Decker said.