DETROIT (FOX 2) - Hours after a Saturday house explosion a Detroit firefighter contacted FOX 2 to say that a dog had been found buried alive. That dog was rescued, but then we heard from him again that there were two more dogs outside in the cold.

Two dogs - Cane Corsos - were still chained up behind a house on Thursday until it exploded Saturday night.  The blast on Evergreen on Detroit's west side sent five people inside to the hospital with serious burns.

Dogs found in backyard of destroyed house get help

Hours after that house explosion a Detroit firefighter contacted FOX 2 to say that a dog had been found buried alive. That dog was rescued, but then we heard from him again that there were two more dogs outside in the cold.

Hours later investigators found a dog buried in the rubble.

DTE Energy, the Detroit Fire Department, ATF, Detroit Police Department all worked to free the dog - who had a broken pelvis. The Detroit Pit Crew rushed her to a veterinarian - she's now recovering and doing well.

The Detroit Pit Crew also notified Detroit Animal Care and Control via email that two more dogs were on the property and needed to be rescued.

"We have no legal authority or anything like that," said Theresa Sumpter, Detroit Pit Crew. "So we took the injured dog, we rushed her to an emergency vet and then we immediately emailed Detroit Animal Care and Control and said there was another dog on the property, we saw two more dogs."

Detroit Animal Care and Control should have taken them - but it turns out they say, they don't use that email anymore and didn't know the dogs were there.

FOX 2 contacted Detroit Dog Rescue - they came out Wednesday night but it was too dark, too dangerous and the dogs were too scared.

They were given some straw to get through the cold night and fortunately DTE workers had been coming by and feeding the dogs - becoming more concerned by the day, wondering when someone was coming to get the dogs.

Thursday Detroit Dog Rescue with the help of Animal Care and Control - removed the dogs and took them to a veterinarian for care.

"Our biggest concern right now is getting them to safety, making sure they are warm, and getting them any medication they might need," said Kristen Kuechenmeister, DDR shelter manager.

"They're a little bit skinny, so they haven't been fed that great," said Bridget Maniere, care coordinator, DDR. "The male seems to have an eye infection, maybe a sore on his lip but it will be okay."

Their owners are still hospitalized but recovering. It's still not known what caused the gas leak that caused the explosion - it is still under investigation.

At least the dogs are now safe - although that should have happened much sooner. Detroit Animal Care and Control told FOX 2 they have a new way for residents and rescues to contact them with issues and emergencies like the one on Evergreen.

"Our preferred method of being contacted is either by phone at (313) 922-DOGS or via the Improve Detroit (app). There was I think, a lack of communication that happened there," said Lori Sowle, assistant director of animal control.

It is one Detroit Animal Care and Control says won't happen again.

"We're just working hard for the citizens of Detroit whether they are furry or not," Sowle said. 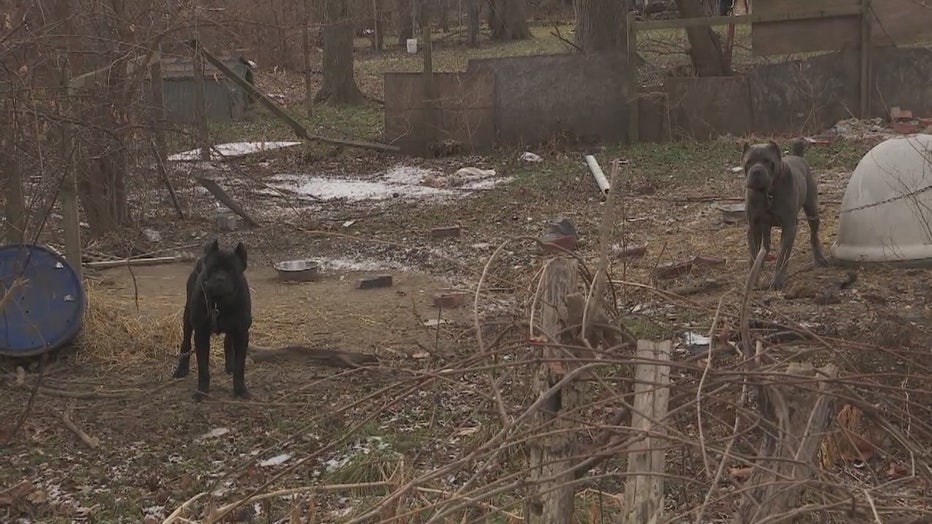