NORTHVILLE TOWNSHIP, Mich. (FOX 2) - "Silence is a crime. So by not saying anything, you are committing a crime yourself," said Gabriella Duhn.

If the person who killed her son, 20-year-old Dominic Duhn of Northville Township, won't turn themselves in, his family hopes someone else will for a cash reward of $15,000.

The family of Dominic Duhn is pleading for answers and information after he was hit and killed by a driver who left the scene last month in Northville Township.

"We know at least one person knows who did this and maybe more," said Dominic's father, Drew Duhn.

At a standstill for weeks, Duhn's family and friends are unable to move on as they still have so many questions: who hit him, why did they leave and what the young man's final moments were.

"To the person who did this, you are a coward and should step up to what you have caused. For someone to keep driving after hitting a human being they do not know is someone who should not be living in society," said Enzo Duhn, the victim's brother.

It was back on the evening of September 3, the Thursday before Labor Day weekend around 11:30 when Northville Township police say a driver hit and killed Dominic on Sheldon Road just south of 6 Mile and left him there. The Michigan State student had been out skateboarding with friends and was killed right in front of them.

"Be that change and that good person that Dominic was. Give us some peace of mind. We're young. I'm 20 years old and I'm going to have to live with this for the rest of my life," Jack Tsalis, a friend of Dominic's, said.

Those who knew Dominic say he was genuine, put others first  and was always trying to better himself, even reading inspirational and self-help books and keeping a detailed journal.

"I will never be able to fully understand why or how this could've happened to him. He saw the best in everyone and that is definitely one of the things I miss most about him," said Alexa, Dominic's girlfriend.

Northville Township police say since Dominic's death they've followed up on dozens of tips and have pulled surveillance video from more than 20 area businesses, but it's been difficult to get an exact make and model of the vehicle that hit Dominic. They say it likely has front-end and windshield damage.

"In my heart, I truly feel that you don't feel good about this. I know this is weighing heavily on you," Gabriella said. "As horrific as this is, I know we're going to have to forgive you. So please just do the right thing." 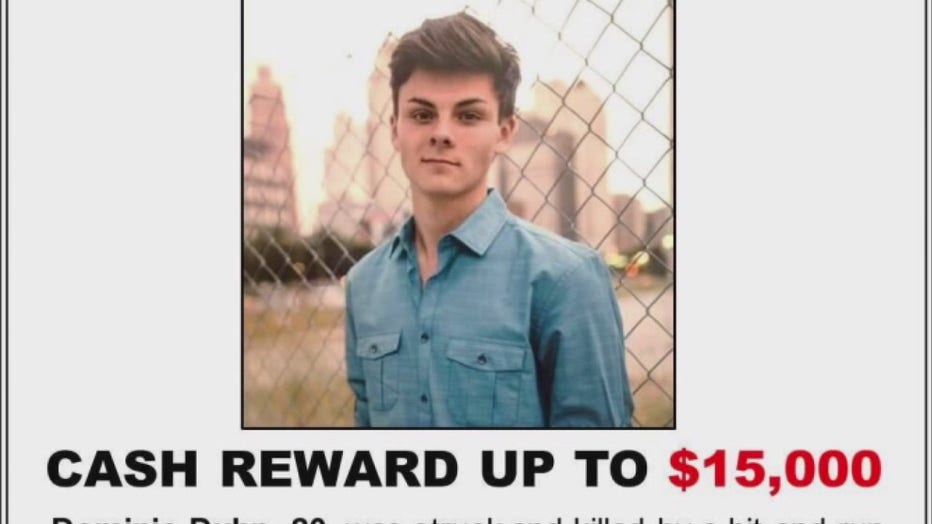 Crime Stoppers of Michigan, with the help of the Duhn family and other donors are $15,000 for information leading to an arrest and, in turn, maybe some peace for these folks.

If you have that information, call Crime Stoppers at 1-800-SPEAK-UP. You will remain anonymous.