WASHTENAW COUNTY, Mich. (FOX 2) - Two Michigan men are facing multiple felony charges after the state's attorney general Dana Nessel said they are involved with a white supremacist gang that terrorized and intimidated a family in Dexter.

Justen Watkins, 25, of Bad Axe, and Alfred Gorman, 35, of Taylor are both facing a gang membership charge, which is a 20-year felony. They're said to be members of a national neo-nazi organization called The Base, which qualifies as a gang under Michigan law according to an affidavit. Watkins claims to have been appointed leader of The Base.

Two Michigan men are facing multiple felony charges after the state's attorney general Dana Nessel said they are involved with a white supremacist gang that terrorized and intimidated a family in Dexter.

The charges come from an incident that happened late at night on Dec. 11, 2019 at a home in Dexter.

Nessel says the family that lives at the home saw two men dressed in dark clothing come onto their front porch, shine a light inside and start taking pictures.

Nessel says the photos were then uploaded to The Base’s channel on the social media platform Telegram with the caption: “The Base sends greetings to Daniel Harper of the Antifa podcast ‘I Don’t Speak German’.”

Nessel says the suspects, Watkins and Gorman, believed a man by the name of Daniel Harper to live at the home but were mistaken. She said the photos were taken to threaten and intimidate Harper, who hosts a podcast that is critical of the neo-Nazi movement and shares concern about the rise in white supremacy in the U.S.

The family who lives at the home called the police. Michigan State Police and the FBI investigated.

In the photo, authorities say Watkins was wearing a black skull mask, a Totenkopf shirt, camouflage pants and a tactical plate carrier with rifle magazines with a patch with a logo for The Base. 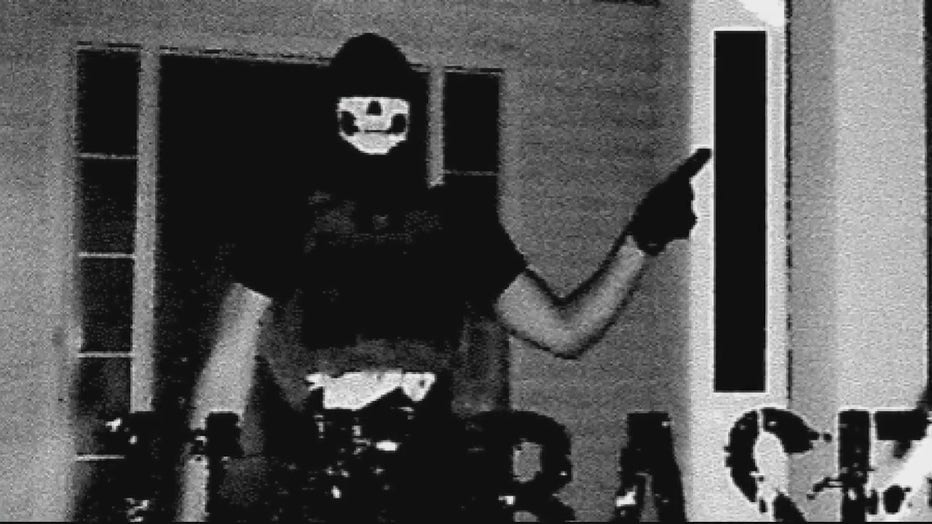 An affidavit says The Base has a logo, a leadership structure and defined membership criteria, which makes it a gang under Michigan law. The common goal that members of The Base share, according to authorities, is to establish a white ethnostate in areas of the U.S. which includes the Upper Peninsula of Michigan.

The photograph of Watkins on the porch of the unknown family's home was used by The Base to encourage harassment by members of The Base and others with white racially motivated violent extremist ideologies, authorities allege.

The two were taken into custody early Thursday morning at their homes. Both are being held at the Washtenaw County Jail and arraignments are pending.

“Using tactics of intimidation to incite fear and violence constitutes criminal behavior,” Nessel said. “We cannot allow dangerous activities to reach their goal of inflicting violence and harm on the public. I am proud to work alongside law enforcement agencies at the local, state and federal levels to safeguard the public’s safety from these serious threats.”