Senator Lindsay Graham and the judiciary committee questioned the CEOs of Facebook and Twitter regarding election security.

WASHINGTON (AP) - Federal regulators on Wednesday sued to force a breakup of Facebook as 48 states and districts accused the company in a separate lawsuit of abusing its market power in social networking to crush smaller competitors.

The antitrust lawsuits were announced by the Federal Trade Commission and New York Attorney General Letitia James. The FTC specifically asked a court to force Facebook sell off its Instagram and WhatsApp messaging services.

“It’s really critically important that we block this predatory acquisition of companies and that we restore confidence to the market,” James said during a press conference announcing the lawsuit.

The FTC said Facebook has engaged in a “a systematic strategy” to eliminate its competition, including by purchasing smaller up-and-coming rivals like Instagram in 2012 and WhatsApp in 2014. James echoed that in her press conference, saying Facebook "used its monopoly power to crush smaller rivals and snuff out competition, all at the expense of everyday users.” 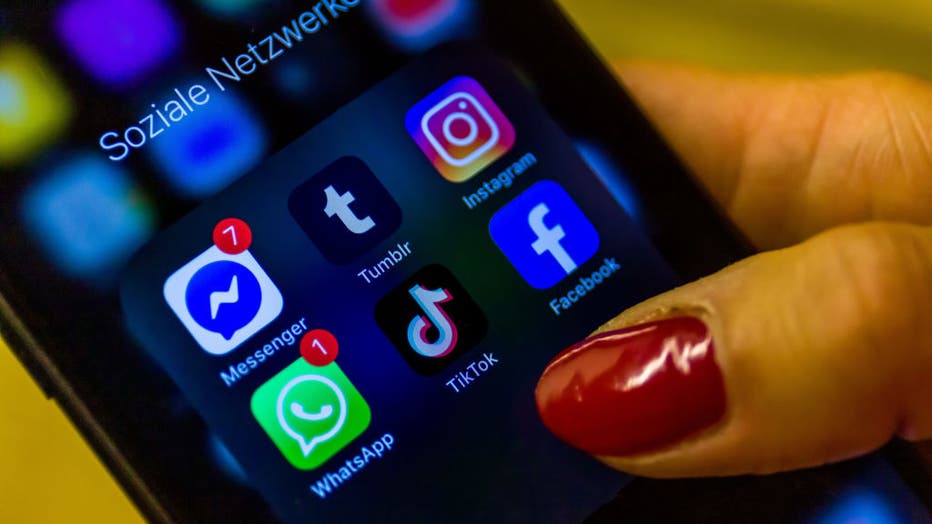 A smartphone screen is seen with the Social Media apps tumblr, Whatsapp, TikTok, Facebook and Instagram on May 11, 2020 in Bochum, Germany.

The FTC fined Facebook $5 billion in 2019 for privacy violations and instituted new oversight and restrictions on its business. The fine was the largest the agency has ever levied on a tech company, although it had no visible impact on Facebook's business.

Facebook called the government actions “revisionist history” that punishes successful businesses and noted that the FTC cleared the Instagram and WhatsApp acquisitions years ago. “The government now wants a do-over, sending a chilling warning to American business that no sale is ever final,” Facebook general counsel Jennifer Newstead said in a statement that echoed the company’s response to a recent congressional antitrust probe.

Facebook is the world’s biggest social network with 2.7 billion users and a company with a market value of nearly $800 billion whose CEO Mark Zuckerberg is the world’s fifth-richest individual and the most public face of Big Tech swagger.

RELATED: Section 230: What the law is and why Trump wants to repeal it

James alleged Facebook had a practice of opening its site to third-party app developers, then abruptly cutting off developers that it saw as a threat. The lawsuit — which includes 46 states, Guam and the District of Columbia — accuses Facebook of anti-competitive conduct and using its market dominance to harvest consumer data and reap a fortune in advertising revenues.

“For years, Facebook has used its monopoly power as a social networking website to stifle competition and innovation and to sell alarming amounts of user data to make money, all at the expense of the many people who use its platform," North Carolina Attorney General Josh Stein, who was on the executive committee of attorneys general conducting the investigation, said in a news release.

James said the coalition worked collaboratively with the FTC but noted the attorneys general conducted their investigation separately.

“Personal social networking is central to the lives of millions of Americans,” Ian Conner, director of the FTC’s Bureau of Competition, said in a statement. “Facebook’s actions to entrench and maintain its monopoly deny consumers the benefits of competition. Our aim is to roll back Facebook’s anticompetitive conduct and restore competition so that innovation and free competition can thrive.”

The suit alleges that Facebook executives including Zuckerberg, “quickly recognized that Instagram was a vibrant and innovative personal social network and an existential threat to Facebook’s monopoly power.”

Facebook paid $1 billion for Instagram, bolstering the social networking platform’s portfolio a month before its stock went public. At the time, the photo-sharing app had about 30 million users and wasn’t producing any revenue. Zuckerberg vowed both companies would be run independently, but over the years the services have become increasingly integrated. Users are now able to link accounts and share content across the platforms. Instagram now has more than 1 billion users worldwide.

Facebook acquired WhatsApp, an encrypted messaging service, for $19 billion. When Facebook bought WhatsApp, it said it “fosters an environment where independent-minded entrepreneurs can build companies, set their own direction and focus on growth while also benefiting from Facebook’s expertise, resources and scale. This approach is working well with Instagram, and WhatsApp will operate in this manner.”

But in the coming years, the founders of both Instagram and WhatsApp left Facebook amid disagreements with Zuckerberg. Facebook has started to integrate Instagram and WhatsApp, most recently by linking the apps’ chat functions with its Messenger service. Such integration could make it more difficult to break off the companies.

NetChoice, a Washington trade association that includes Facebook as a member, quickly panned the lawsuits. The case for antitrust enforcement against Facebook “has never been weaker,” Netchoice vice president Carl Szabo said in a statement, pointing to newer social services such as TikTok and Snapchat as rivals that could “overtake” older platforms.