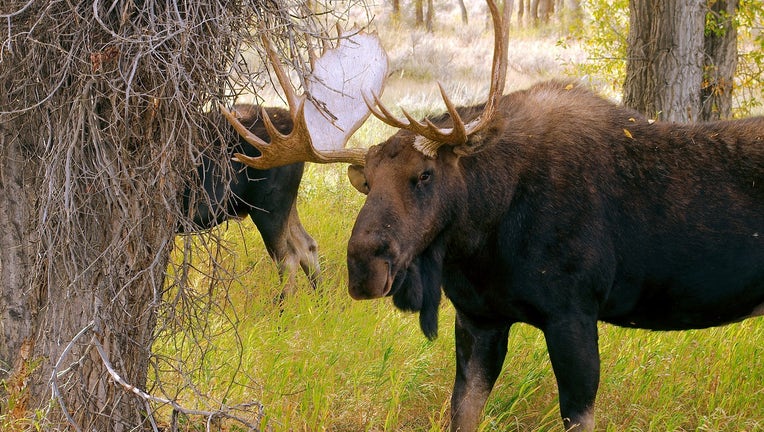 (Image by Mike Goad from Pixabay)

MARQUETTE COUNTY, Mich. (FOX 2) - Drivers in Michigan's Upper Peninsula are urged to be extra cautious driving when it's dark after recent crashes with moose.

Six bull moose have been struck and killed by vehicles along portions of M-95 and U.S Highways 141 and 41 West in Marquette and Baraga counties since late May.

"All of the moose killed were struck after darkness fell, when moose, especially the darker colored bulls, are more difficult for motorists to see," said John Pepin, Michigan Department of Natural Resources deputy public information officer. "Each of these accidents occurred in areas marked with ‘moose crossing’ signs."

The Marquette County crash happened on M-95, a half-mile south of its intersection with U.S. Highway 41.

Two more crashed happend on June 13. One was in Baraga County on U.S. Highway 41 at the crossing of Tioga Creek, while the second occurred in Marquette County on M-95, 1.5 miles south of its intersection with U.S. Highway 41.

"Many people driving in the U.P. see moose and many people stop to look and take pictures, especially during the summer travel season," Pepin said. "Folks doing this need to remember to pull safely off onto the shoulder of the road, watch for passing traffic and keep a safe distance from these wild animals."

DNR wildlife biologist said moose are most often traveling in the fall during their mating season.

The most recent DNR moose survey conducted in February 2019 estimated that there are 509 moose in the western U.P., which covers about 1,400 square miles. The next survey is planned for 2024. The population is estimated to grow at an average of about 2% each year.