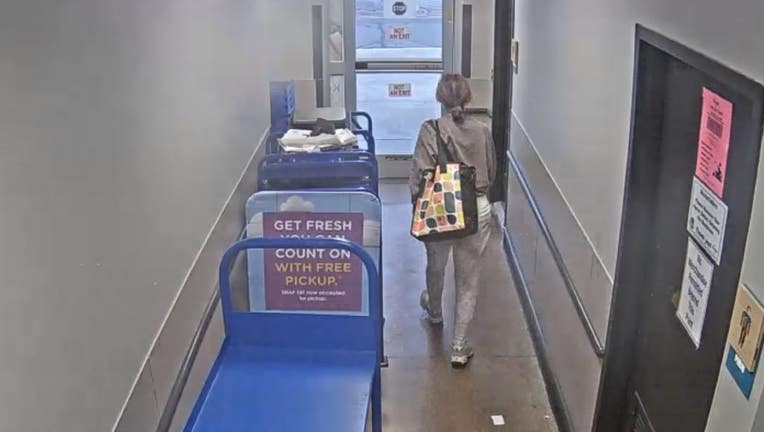 INDEPENDENCE TOWNSHIP, Mich. (FOX 2) - The Oakland County Sheriff said an 80-year-old woman who accidentally left it behind at an Independence Township Kroger does not want to press charges against the woman who took it after she returned the money and gave her a written apology.

The sheriff announced that charges would not be pursued for the purse theft, that happened on Sunday. The 80-year-old woman was walking out of Kroger in Independence Township around 3:45 p.m. on Sunday when she sat with her purse while waiting for her daughter to pick her up. Once her daughter arrived at the front, she walked out with her groceries but left her purse on the window ledge by the door.

A few minutes later, a woman walked in and passed by the purse before doing a double-take and going back to pick it up.

When the 80-year-old realized she had left her purse, her daughter went inside to get it, but it was already gone.

She was then seen taking it into a bathroom and removing $100 in cash from the purse. The daughter told the store manager, who recalled just seeing a woman walk into the women’s bathroom with a purse matching the description. The purse was found in the corner of the bathroom. The only thing missing was $100.

The woman, a 63-year-old from Independence Township called the sheriff shortly after the video was released as she was identifiable in the video.

She met with authorities on Wednesday and admitted to taking the purse. She first said she left it at customer service before conceding to taking the money. She said she has a prior retail fraud conviction in 2019 in Troy and also another arrest for the same crime 25 years ago.

The sheriff said authorities from the Kroger on Sashabaw Road have banned her from shopping at the store.

"The victim is grateful to the Sheriff’s Office for resolving this matter," Sheriff Michael Bouchard said. "She didn’t want to press charges and simply wanted to move on after the culprit apologized and returned the stolen money. While I am saddened this individual won’t face full responsibility for her intentional act, I appreciate the public‘s attention which I am sure is why the perpetrator decided to turn herself in."