DETROIT (FOX 2) - The owner of 910 AM, Kevin Adell, is stirring up controversy and frustrating his hosts by banning the topic of former Detroit Mayor Kwame Kilpatrick from all of the superstation's shows.

Some of 910 AM's hosts are calling it quits after owner Kevin Adell sent out an email banning them from talking about Kwame Kilpatrick and their guests, from even mentioning him. It is all because Kilpatrick never responded to Adell's offer to host a show.

Some of 910 AM's hosts are calling it quits after Adell sent out an email banning them from talking about Kilpatrick and their guests, from even mentioning him.  It is all because Kilpatrick never responded to Adell's offer to host a show.

"Everyone who knows me, knows I am very passionate about my city," said Nicole Small. "So how can I not talk about the number one topic that is going on in the city of Detroit. So now that he’s finally free and, for him now to be treated as if he’s still incarcerated by a man whose ego feels bruised because he didn’t receive a callback, it’s excessive to me. And that type of behavior should not be tolerated."

Small is the vice-chair of Detroit's charter revision commission and hosted a morning show on 910 AM. The station says she was fired for promoting herself as a councilwoman, something Small denies.

She says she walked away willingly - but the Kilpatrick censorship was the last straw.

Community organizer and former Detroit school board member Elena Herrada hosted a show Sunday mornings. She too, says she’s done with Adell and 910 AM for its Kilpatrick ban. 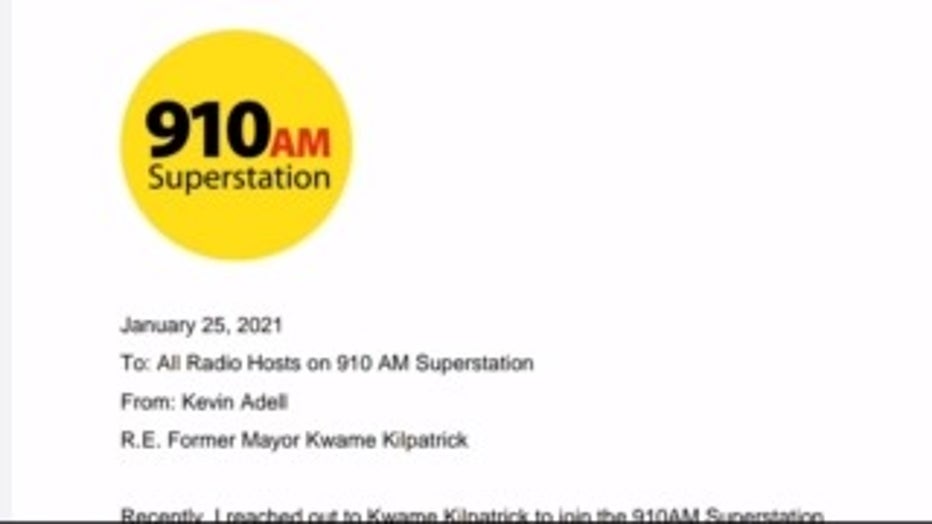 "The way in which he’s treated in the media, makes you wonder why are they so afraid of him? What is it about him that creates this kind of rage in certain people?" said Elena Herrada, former 910 AM host.

Now there’s a call to boycott the station and for the remaining hosts to resign. Kilpatrick was released from federal prison on January 20th after receiving a commutation from former President Donald Trump.

Adell sent out the memo to radio hosts banning him from 910 AM just five days later.

"Now I've got to be silenced and you take away my freedom of speech and you censor me behind something that’s got nothing to do with me?" said Pastor Maurice Hardwick. "It seems like slavery all over again. It’s Black History Month. It’s like you want to whip him with me, for not taking a free job. it sounds like slavery to me." 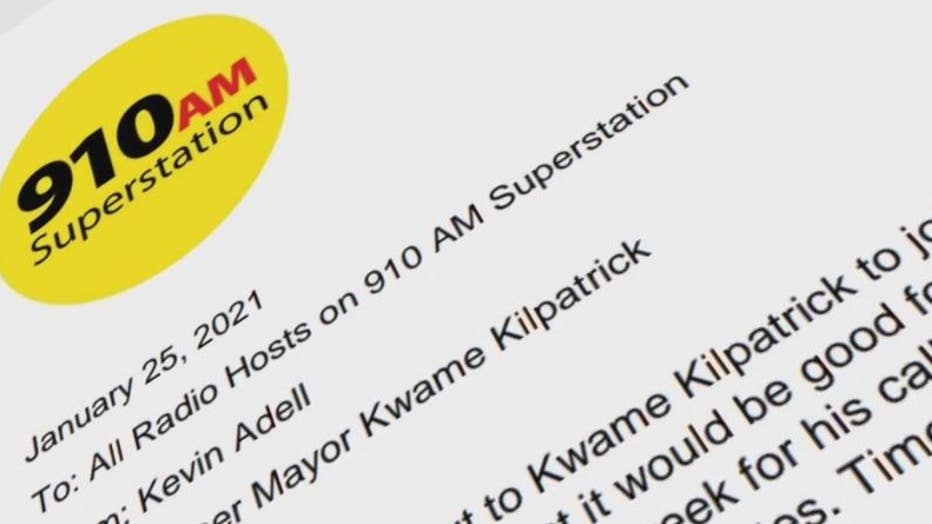 "I am not nobody's lapdog," he said. "You are not going to tell me when I can speak."

"I’m going to show up Sunday until I’m told I’m not," Hardwick said. "I want to talk about freedom of speech Sunday."

Hardwick says he is prepared to "walk away" from 910 AM if it comes down to that.