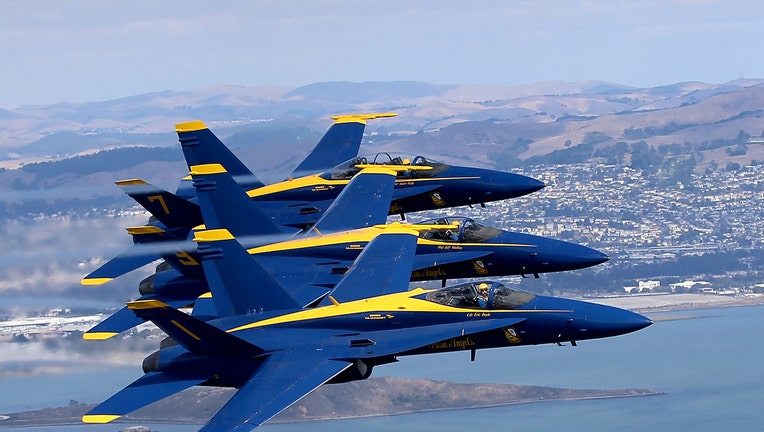 The U.S. Navy's Blue Angels and the Air Force's Thunderbirds were supposed to honor Michigan medical workers with a special flyover on Wednesday but, late Tuesday afternoon, the Blue Angels had to postpone the show.

The series of flyovers, dubbed Operation America Strong, was announced Monday and is taking place in the skies of the nation's regions hit the hardest by the coronavirus.

According to a statement sent to FOX 2 by a representative of the Blue Angels, Wednesday's plan was postpone due to 'unforeseen circumstances'.

The show was to be a formation of 6 F-16C/D Fighting Flacon and 6 F-18C/D Hornet aircraft and last approximately 35 minutes.

The reason for the cancelation is not yet known. Wednesday is expected to be much cooler with a chance of rain throughout the day.

A makeup date for the flyover was not announced.

“We are truly excited to take to the skies with our Navy counterparts for a nation-wide tribute to the men and women keeping our communities safe.” said U.S. Air Force Lt. Col. John Caldwell, Thunderbird 1 and mission commander for the flyover. “We hope to give Americans a touching display of American resolve that honors those serving on the frontline of our fight with COVID-19.”

"What we're doing is we're paying tribute to our front line health care workers confronting COVID," said President Donald Trump during a coronavirus briefing. "And it's really a signal to all Americans to remain vigilant during the outbreak. This is a tribute to them, to our warriors. Because they are equal warriors to those incredible pilots and all of the fighters that we have for the more traditional fights that we win and we win."