CANTON, Mich. (FOX 2) - You’ve probably heard the phrase before – it’s better to give than to receive. And Nick Kadaj is the latest example of that.

He spent his 13th birthday Wednesday delivering personal protective equipment - that he made himself on his 3D printer - to the doctors and nurses at Beaumont Hospital in Canton.

Nick Kadaj got the idea from his STEM teacher to use his 3D printer at home to make PPE for local healthcare workers on the COVID-19 front lines.

Nick’s soccer coach just happens to be the Chief of Staff at Beaumont Wayne.

“[Nick] said, ‘Dad, how can we help out Coach Muz? So I contacted him and asked him if this is something he’d like to have and he said absolutely,” said Eric Kadaj.

Nick knew his STEM teacher was using his 3D printer to make personal protective equipment for healthcare workers on the front lines, so Nick decided he could use his time off from school to do the same.

“I've just been making these things, trying to help as many people possible to help fight the coronavirus,” Nick told us.

He made 15 clips that go behind the masks to take the strain off the ears, as well as 25 face shields. 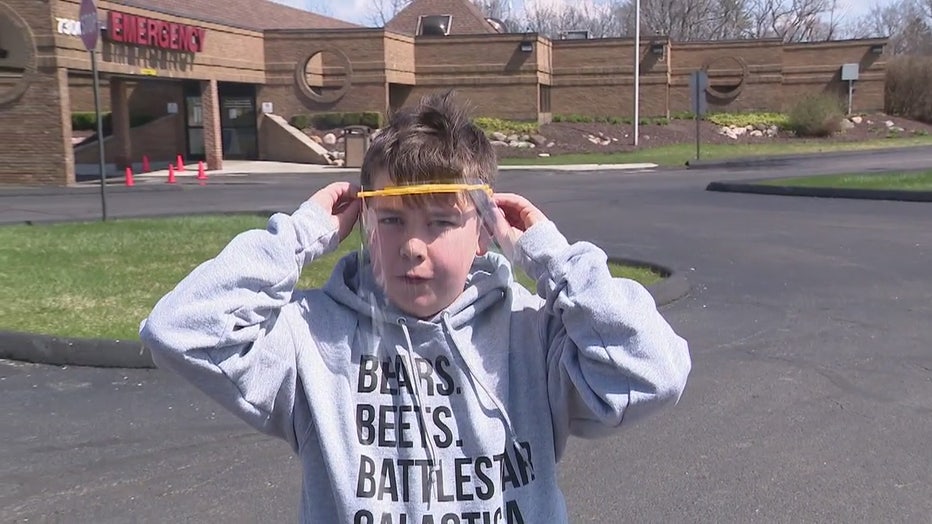 And on this day, the day he became a teenager, instead of their planned celebration at Universal Studios in Florida he and his family made the special delivery.

“It's the kind of thing that gives us the fire to come to work every day,” said Dr. Muzammil Ahmed, who’s better known as Coach Muz to Nick and his family.

Dr. Ahmed says the stay-home order is making a difference and that social distancing is having an impact. He asks all of us to stick with it for a few more weeks so the health system isn't overwhelmed, and so nurses like Patty can keep working with the equipment they need.

“For people like Nick and everyone else who's been doing this - and there's dozens and dozens of groups and people who are just pouring out their love for the frontline workers – thank you so much. We really appreciate it and we're going to get through this together.”

If you’d like to make a donation to Beaumont like Nick, you can do so at their Southfield location or their location in Van Buren Township. You can get more information on that here.