Cyber Monday is about ready to kick off, which means the endless stream of holiday gifts is about to ramp up for America's largest retailer.

(FOX 2) - Southeast Michigan is in the middle of a big building boom.

Whether it's the supply chain or hospitality sector, manufacturing or health care, almost all new non-residential buildings being constructed in the region are growing larger.

There's several forces driving this trend, depending on the industry. A combination of culture changes in shopping, a population that's aging, and a growing demand for faster shipping are all pushing up the square footage of buildings in and around Metro Detroit.

However, there is one theme consistent across the bigger building trend: rising construction costs.

"If I had to point to one thing, it's definitely construction costs and labor supply," said Jeff Nutting, a forecast coordinator in SEMCOG.

The costs of material are up and the availability of skilled labor is down. As raw supplies like wood continue to rise, the number of welders, plumbers, and electricians has hampered the industry's ability to keep up with demand.

To offset the pressures, companies have opted to build the same amount of square footage, but in fewer buildings. Whether it's big box stores like Costco and Walmart, or logistics centers owned by Amazon, businesses have found it easier to apply for one permit and construct one facility.

MORE: Why did the Detroit fire and police pension board suing the WWE?

It's cheaper to build a single building. Companies also don't have to worry as much about delays if they are only constructing a single facility vs. multiple. It can be tough for contractors to stick to a schedule as there are fewer laborers to hire.

"It can't be understated the decline in skilled trades relative to the demand," Nutting said. "Part of the extending lag has to do with being able to get materials, but also with skilled trades - it's something culturally we haven't invested in enough over time." 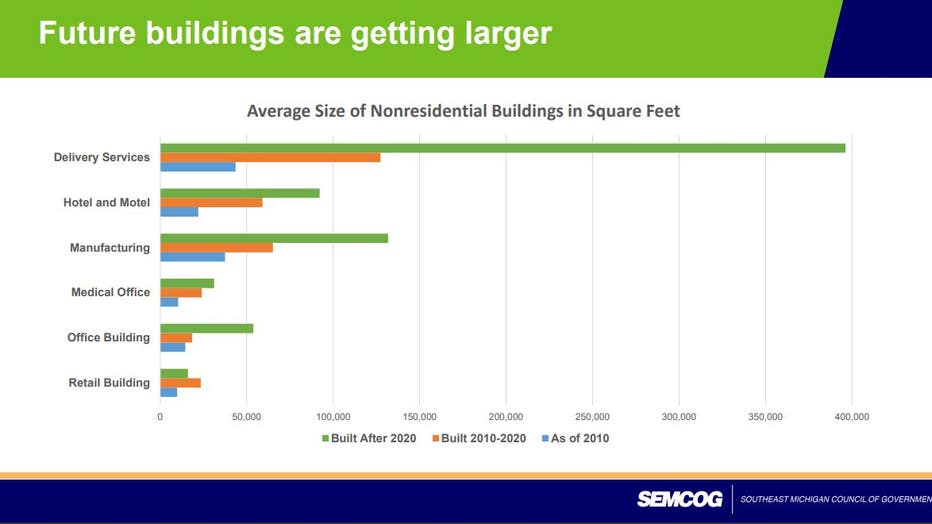 Here's what else is driving the trend.

Speaking of Amazon, many residents of Metro Detroit have likely seen the massive complex built in Detroit at the former state fair grounds. The $400 million project is four stories and 3.8 million-square-feet.

The new center is also the product of online shopping becoming the predominant way Americans buy and sell goods. And with the increase in e-commerce has come a spike in demand that those goods arrive faster, causing a greater need for storage space.

SEMCOG, which released the data about buildings in its 2050 regional forecast last week, says logistics centers and buildings in the delivery services sector represent the largest increase in facility sizes.

"Now that people have the expectation they get their goods faster, you need larger facilities to store goods," Nutting said.

Another driver of bigger buildings is the region's aging population. Much of Michigan and the Midwest is experiencing an inversion of its population. Seniors are expected to outnumber children and teenagers by 2028, according to SEMCOG's population forecast.

Nutting says 50 new nursing homes and 66 new medical buildings have been built in Southeast Michigan recently. In order to accommodate the growing number of seniors, facilities that cater to older people need to be bigger.

The bigger buildings trend doesn't mean hospitals are growing. Their size is subject to conditions set by the state and is determined by the number of beds that are needed. But ambulatory buildings like health centers, dental offices, social assistance facilities as well as non-ambulatory buildings like assisted living are all growing larger in response to the aging population.

Bigger buildings is an early answer to the shifting trend - but hardly the only impact to be felt from having more seniors.

Health care is expected to be one of the fastest growing sectors for jobs in the next 30 years.

If someone walks into a Walmart or Meijer, they'll see more than just food and home goods. There might be a coffee shop or a bank. A hair salon could be seen at the front or maybe a pharmacy.

The companies have continued offering more services since it can help attract more customers to the store.

But as the larger companies continue to expand, the one subsection of the industry bucking the big building trend are smaller retailers. Strip malls are going out of style in place of single-purpose stores that could only have one or two tenants.

"In general, strip malls are suffering for the same reason that people are shopping online," Nutting said. "The magnitude of the shift from purchasing goods locally to purchasing online from various vendors - that cultural shift has very much negatively impacted the retail business sector."

No vacancy, no problem

The implications of larger buildings won't be an issue as long as the tenants using them stay in them.

As long as the space is occupied and productive, there isn't necessarily a downside to the big building trend, Nutting said. But the increase in square footage does come with some pitfalls - mainly the difficulty owners will have finding new tenants for their massive buildings.

"As they increase in size, the customer base decreases in size as far as who wants to purchase or lease that building," Nutting said. "There's only so many companies that will have large distribution centers."