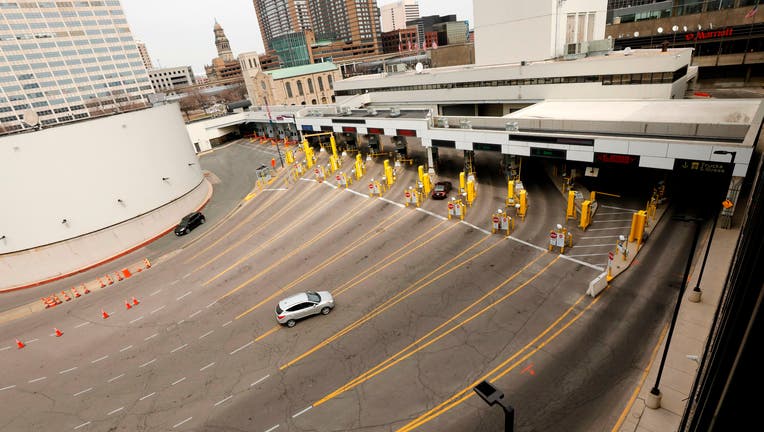 A light flow of vehicles from Windsor, Canada, that traveled through the Detroit Windsor Tunnel enter the customs area in Detroit, Michigan on March 18, 2020. - US and Canada have mutually agreed on March 18, 2020 to temporarily restrict " non essent

BURLINGTON, VT - In a normal, pre-COVID-19 summer, scores of pleasure boats are anchored in Lake Champlain off the Burlington waterfront by July 4, with most of them from Canada. But the anchorage is nearly empty this year because of the ongoing border closure.

People who rely on those boaters directly and indirectly hope Canadians are back soon enough to avoid losing a second summer to the pandemic.

"We can't wait to welcome our visitors from Canada so that they can really embrace our new location in Burlington because I know that they are going to like it as much as we do," said Elizabeth White, the director of development for Dream Yacht Charter. The company, which rents live-aboard sailing vessels to tourists across the world, moved its Lake Champlain operations to Burlington from upstate New York in 2020.

But it's unclear when the border — an easy sail about 40 miles (64 kilometers) north to where Quebec's Richelieu River drains the lake north into Canada — will fully reopen.

In the early days of the pandemic, the U.S. and Canadian governments closed the more than 5,500-mile (8,800-kilometer) border to nonessential traffic. Now with increasing vaccination rates and dropping infection rates, many are annoyed the two governments haven’t laid out detailed plans to fully reopen the border.

Canada is easing its restrictions. Starting Monday, fully vaccinated Canadians or permanent legal residents may return to Canada without quarantining. But among the requirements are a negative test for the virus before returning, and another once they get back.

The Canadian and U.S. governments aren’t expected to reevaluate the border closure until July 21.

Commercial traffic has gone back and forth normally between the two countries since the start of the pandemic. Canadians are able to fly into the United States with a negative COVID-19 test and Americans can visit Canada to see relatives or close friends as outlined by a strict set of guidelines. But to do that, people entering Canada must quarantine for two weeks on arrival and the quarantine is enforced by the Royal Canadian Mounted Police.

The U.S. Travel Association estimates that each month the border is closed costs $1.5 billion. Canadian officials say Canada had about 22 million foreign visitors in 2019 — about 15 million of them from the United States.

But there is a human angle to the closing that's missed in the economic figures.

Since shortly after the border closed in March 2020, people from both countries traveled to Derby Line, Vermont, and Stanstead, Quebec, to hold impromptu family reunions from their own side of the border on a residential street. While they can talk across the border, they can't touch and they can't pass things back and forth.

In the state of Washington, a grocery store in Point Roberts was in danger of closing until the state gave it a $100,000 grant to keep it open until the border reopens and its Canadian customers can return. It sits in an approximately 5-square-mile (8-square-kilometer) slice of the United States on the tip of a peninsula south of Vancouver, British Columbia, that juts into U.S. territory.

In far northern Michigan, a bridge connects Sault Ste. Marie to a larger city with the same name in Ontario, Canada. Denise Boston Talentino, a citizen of both countries, has lived on the U.S. side of the "Soo" for 26 years. She commuted to Canada to work as an addiction counselor before retiring in November but couldn’t visit family there.

"The United States and Canada were like one world to me. I never imagined it would ever last this long," Talentino said of the border rules.

"We are optimistic that the decrease in cases and increase in vaccine coverage will in due course allow a progressive easing of measures at the border," said Madeleine Gomery, a spokesperson for Canada Public Safety Minister Bill Blair. "In the meantime, we are proceeding with appropriate caution on both sides, taking advice of public health experts, and encouraging Canadians to continue receiving their vaccinations.’’

Nathaniel Erskine-Smith, a Liberal member of the Canadian Parliament from the Toronto area, has been pushing for the safe reopening of the border. Erskine-Smith said that easing the entry requirements for Canadian citizens is an important step for fully vaccinated individuals to build trust in travel.

"I would say I continue to think we should move faster," Erskine-Smith said.

He says officials on both sides of the border should have begun the process months ago on reopening details such as what would be acceptable proof of vaccination that would allow people to cross.

On the U.S. side, politicians from states along the Canadian border have been pushing the Biden administration to move forward with plans to reopen the border.

"We in Vermont are for the restoration of these cross-border relationships as soon as possible," said Vermont’s Democratic U.S. Sen. Patrick Leahy. "Those decisions should be based on sound science and not on politics."

While the two governments are pondering the policy, people accustomed to seeing Canadians every summer are waiting.

In Maine's Old Orchard Beach, a longtime popular vacation spot for people from Quebec, the Canadians are sorely missed. At the Alouette Beach Resort there was a single Canadian visitor the weekend of Quebec’s Saint-Jean-Baptiste Day, a province holiday that often turns into a long weekend for vacationing families from Quebec.

Owner Fred Kennedy said the loss has been made up to some degree by American visitors and, looking ahead, some Canadians are making inquiries about travel later in the summer.

"We still miss the Canadians," Kennedy said. "It gives a flavor to Old Orchard."