It is a pattern that started after MDOT completed that phase of the I-75 Modernization Project, which attorney Ven Johnson says has a major defect. The claim is that after it was poured, the concrete on that section of roadway did not cure or settle properly.

FOX 2 - In a court complaint filed Monday the Michigan Department of Transportation is accused of being negligent.

FOX 2 has learned road construction crews experienced a problem when they poured a section of southbound I-75. Instead of fixing the issue -  the transportation department opened the roadway anyway - ultimately leading to the death of two young men.

"They said I needed to sit down. and then they said, 'There is no other way to tell you this ma'am, but your son has been killed in an accident," said Susan Pontzer.

On June 25th 2021, parents Susan and Jim Pontzer’s world shattered. Tim, their oldest son who has always been known for his compassion, enthusiasm and dedication to all things sports, died in a crash.

"He was the Wikipedia of just about everything sports, it was a passion," Jim said.

Tim recently found a new career passion – working for a Royal Oak marketing firm. He was on his way to a client meeting when the 27-year-old lost control of his car on southbound I-75 near Adams in Troy - and became pinned against the center cement barrier.

Dispatcher: "Are you okay?"

Timothy Pontzer "I am okay, the vehicle does appear to be leaking gasoline, I can see it out my windshield. I can't really get out of the vehicle."

"My name is Tim Pontzer."

Timothy Pontzer: "It is on the driver's side, I am okay."

Dispatcher: "Are you still inside the car?"

Timothy Pontzer: "Yes I am, I can't really get out to be honest."

According to the Troy crash report, Tim was alive, not even hurt – just trapped. Without hesitation, 25-year-old Alec Esparza stopped to help someone in need, an act he was known for.

Alec recently became a living kidney donor and was on his way to Washington DC  following his passion for politics and protecting the environment.

"Total strangers to come and try to help someone they saw in need," said Susan. "And then, to have what happened to them, too."

Dispatcher: "Are you able to pull yourself up and out?"

Timothy Pontzer: "Yeah, I think I can (inaudible). If you can hold that open, that would be great."

Just as Alec and another man, who also stopped to help, was about to free Tim through his passenger door, the crash report shows a driver of a full-size van lost control and slammed into all three men - killing Tim and Alec. The older man, who survived, was able to jump out of the way in time.

"When he left I told him 'I love you' and I said to 'Please stay safe in all this rain,'" Susan said.

According to the initial crash report – the road surface was wet because of the heavy rain and as FOX 2 has now learned – may have played a role in the deadly double crash.

The final case report revealed, both vehicles that lost control "were driving below the 70 miles an hour speed limit, although road conditions were wet. One witness even told investigators the van looked like "it was sliding on ice." 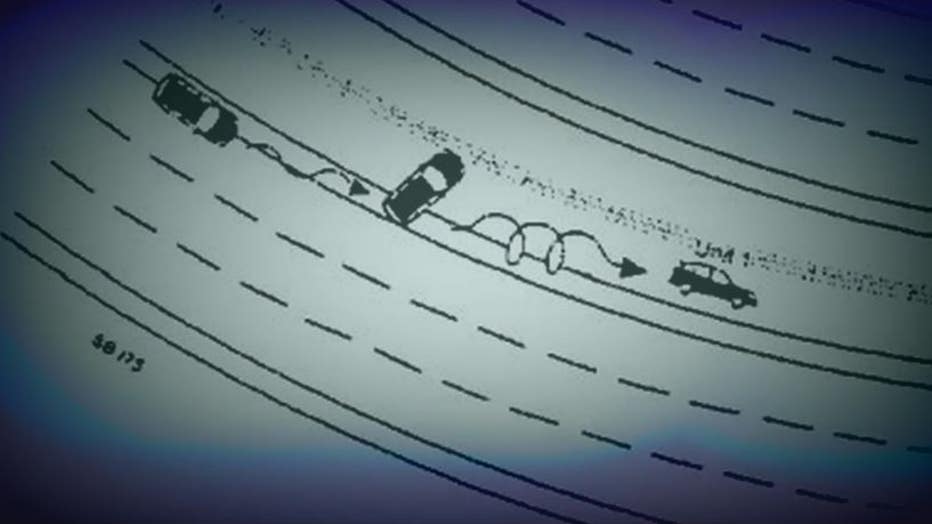 A diagram from the crash report.

Esparza is someone you can consider an expert on the subject.

For the last 45 years, he’s worked for the Michigan Department of Transportation. He spent decades handling traffic and safety for MDOT – most recently as the transportation maintence coordinator in The Bay Region. He also happens to be Alec’s father.

"You try to deal with what is going on and that comes up – again your heart goes into your stomach," Esparza said.

"You try to think all along it was an honest accident and couldn’t be avoided," said Tracie Esparza. "But when you hear something like that you think ok, maybe it probably could have been avoided."

From Troy police officers, who responded, to the tow truck drivers, who hauled away their son’s car, Ponce and Tracie Esparza of Saginaw Township, say they were told there have been several accidents in the same stretch of I-75 where their son was killed.

"He had notified MDOT there are problems with that road right there," Ponce said. "He had issues in the past and as a matter of fact, there was an accident later that day in that location."

In the revised case report, the investigator claims, in early July, he "reported the crash area to MDOT and requested they look into any errors or issues with the concrete that may have contributed to specifically - the loss of control of the two vehicles….in this crash ..but also several other crashes they have noticed, since the concrete was newly poured..."

FOX 2 obtained the traffic crash reports from 2021, specifically for the section of southbound I-75, south of Adams near Coolidge. Out of a total of 16 car accidents on that same stretch of roadway, eight involved wet roads causing cars to lose control.

A pattern that started after the Michigan Department of Transportation completed that phase of the I-75 Modernization Project, which Ven Johnson, the attorney now representing both families, says has a major defect. The claim is that after it was poured, the concrete on that section of roadway did not cure or settle properly. 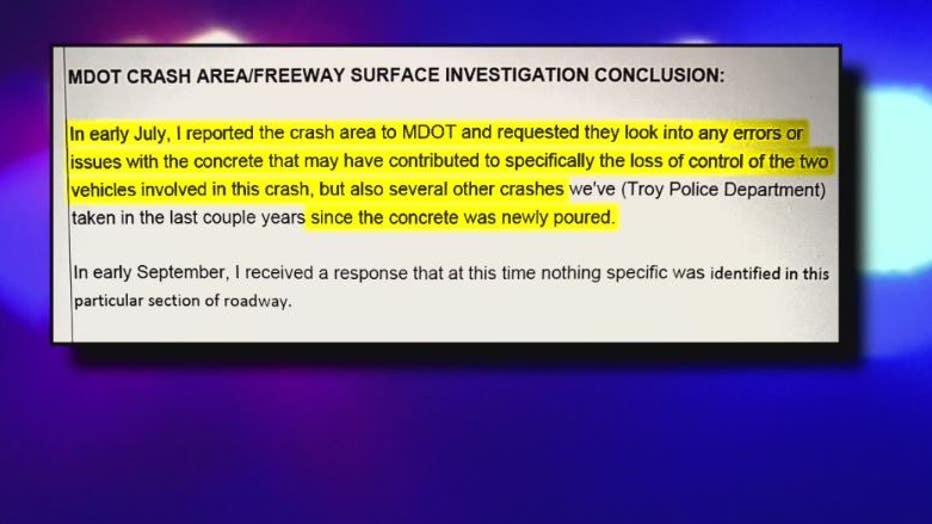 "When it settles, it sinks into the pavement, through the weight of the concrete it could settle," Ponce said. "There could be muck down there, it could be a bad foundation, (that’s where water pools) and when it goes down, you have a dip in the roadway and that’s where water will stay."

And this year Metro Detroit has had a lot of rain. According to our meteorologists, so far in 2021, it's rained for around 100 days. The amount of precipitation with rain and melted snow combined, is 15 percent above average.

As MDOT’s maintenance coordinator Ponce will tell you, when vehicles hit the lower level of wet roadways, vehicles can hydroplane and lose control.

According to the crash reports, that may have happened to Tim Pontzer and the driver of the van that lost control and killed his son.

Ponce says it was a tough day when his coworkers told him there was a defect in the road, was made tougher when they told him MDOT - the state agency he dedicated his life to for more than four decades - knew about it, and didn't fix it.

"They had one way to go fix it – cure it or we’ll let it sit the way it is, knowing full well that there is a dip in the road - which in addition to being bad with cars going 70 to 80 miles an hour - now add water," said attorney Ven Johnson.

Johnson is going after the state and MDOT, who he claims knew about the problem, had a responsibility to fix, and still opened the unsafe road for drivers. But suing the government for a road defect may be a challenge.

"Our government is making it more difficult to hold them accountable for them not doing the job they are required to do, and our tax dollars go to pay," Johnson said. 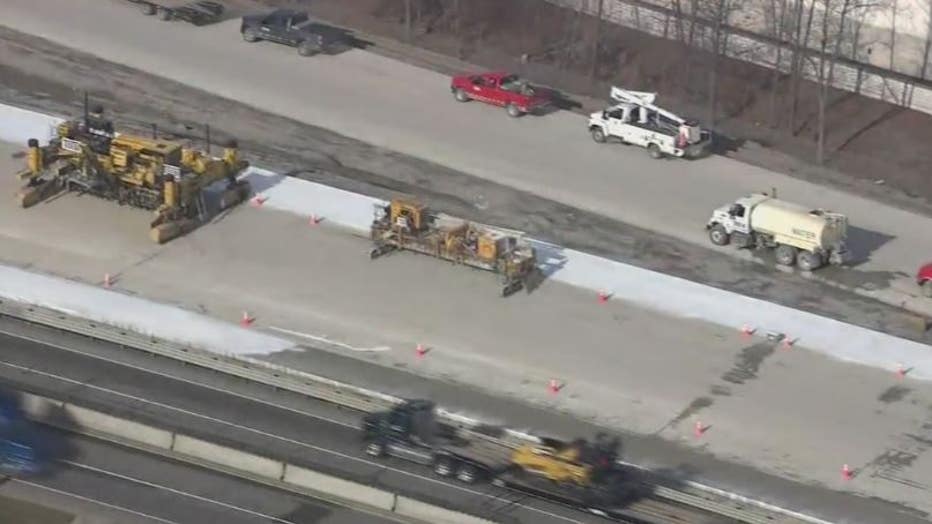 Because of something called Sovereign Immunity, in most cases government agencies cannot be named in a lawsuit, unless it can be proven it was a road defect, not a design issue. And that the government and its agencies did not maintain the roadway in reasonable repair, had notice of the defect, and failed to fix in a reasonable amount of time.

"I don’t want to see this happen to anybody. I really don’t. Unless you lost a child you really have no idea," Ponce said.

But the Esparza and Pontzer families have no choice. Their lives have been changed forever after both beloved young men – with bright futures were taken away in an instant.

"I truly hope that they find out why," Susan said.  "Because there is no reason he went to work that day and he didn’t come home."

The complaint filed with the court Monday claims a sub-contractor out of Shelby Township hired by MDOT for the Modernization Project alerted road technicians about cement not settling properly - creating a bird bath effect - and what needed to be done to fix it. But to date, nothing has been done.

After several attempts for an interview with an MDOT official, a statement was released from the deputy communications director which reads:

"Evidently Troy police have concluded their crash investigation and submitted their findings to the prosecutor. There is no indication that the road was the cause of the crashes. But officials at the department will be closely analyzing the findings. Safety is paramount at MDOT and informs everything the department does." 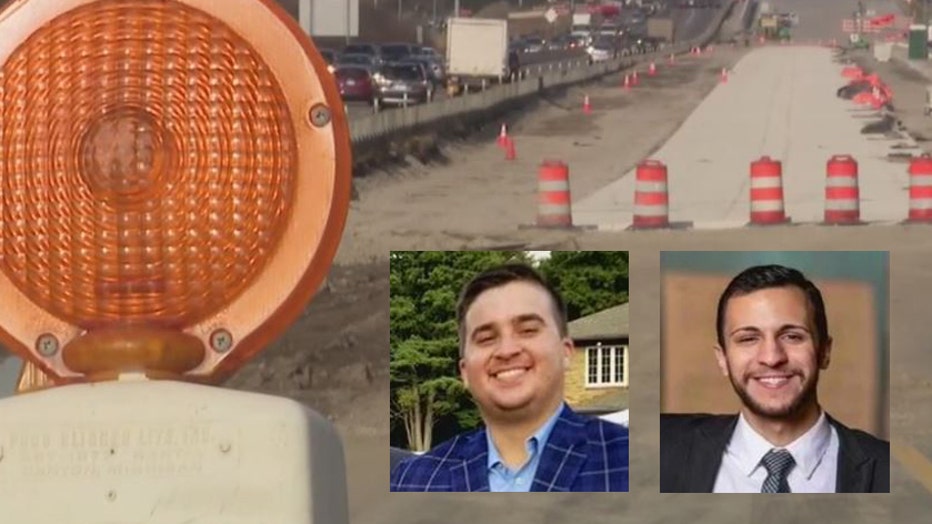 A court complain claims a section of I-75 is defective which led to a crash killing both Tim Pontzer, left, and Alec Esparza.

The Oakland County Prosecutor will still have to determine if charges should be filed against the surviving driver.

The Troy Police Department says officers noticed a pattern as well after that section of the Modernization Project was completed. It informed MDOT and even asked the state for its stats on crashes in that area - but are still waiting for those numbers.