A press conference was held Tuesday at the county’s main vaccination site as officials shared what’s happening in their respective departments. But they really were there to push a message against vaccine hesitancy.

FERNDALE, Mich. - Michigan is still coming down from its latest coronavirus surge but the state is already eyeing what a summer without restrictions could look like.

It may be months before enough citizens have gotten their first vaccine shot that Michigan would remove its mask order, according to the governor's Mi Vacc to Normal plan. Some estimates believe that won't happen until August.

"If you add to that (the number of people who have been vaccinated) the 2 million-plus people that have already had COVID and recovered from it, and the natural immunity they acquire because of that, we are already at the 70%," said Sen. Mike Shirkey (R-Clarklake) during a radio interview this week.

But immunity from an infection isn't the same as immunity from the vaccine, infectious disease experts say. Researchers don't know how long antibodies stick around after someone overcomes their infection.

Furthermore, some evidence has indicated protection from the mRNA vaccines is better than the protection received from a post-infection.

"Everyone who had a previous infection should get vaccinated," said Dr. Matthew Sims, with Beaumont Health.

There's no definitive way of knowing how long immunity from the vaccine or a COVID-19 infection lasts because neither has been around long enough.

But in the months since the Pfizer and Moderna vaccines hit the market, experts say both provide at least six months of protection and likely many more. It's tough to say since they have only been widely distributed as of last December.

And even after a vaccine delivers antibodies that eventually decline in numbers over time, the body will still be able to protect itself due to the body's natural boosting where it remembers how to make antibodies if the infection returns.

A vaccine expert from the University of Maryland told the Associated Press in April that the current vaccines "will likely last for at least about a year" but probably won't last forever - a bit like the measles shots.

It's even less clear how long immunity lasts in someone who tested positive for the virus. Sims says that people "definitely have three months" of immunity and probably six months. There's also uncertainty about what kind of immunity a specific outcome from being infected would offer. Whether someone was on a ventilator due to contracting COVID-19 or never knew they had it could play a role in how the body responds.

For the groups that already contracted the virus and then received the vaccine, their immunity is believed to be even more robust.

Why is vaccine immunity better?

For anybody that gets vaccinated or survives contracting COVID-19, their body will be better equipped to deal with SARS-CoV-2 - the disease that causes COVID-19 - if it comes into contact with it again.

But experts say immunity from vaccines is still better.

"Both types of immunity will contribute to herd immunity," said Josh Price, a research professor in the department of epidemiology at the University of Michigan. "But if you don't have to get infected and you'll get a better response from a vaccine, vaccinations are where you want to go."

Besides avoiding a potentially fatal infection, long-term scarring to one's lungs and brain fog, or passing it on to a more vulnerable family member, the vaccines, particularly the mRNA vaccines, produce a higher number of antibodies than an infection.

Sims says that means the body can better defend against other variants as well.

Shirkey's remarks about there being two million Michigan residents that have contracted the virus came from a study that estimated the true number of coronavirus infections was likely twice the reported amount. So far, Michigan has confirmed 956,102 confirmed and probable cases, which would mean the University of Texas Southwestern Medical Center's estimate would be double that.

Combining that rough estimate with the 4,147,193 who already got their first shot would elevate the number of Michigan's protected population to more than 70%.

That's the justification the Michigan senator used when advocating for loosening restrictions during his WJR interview this week. 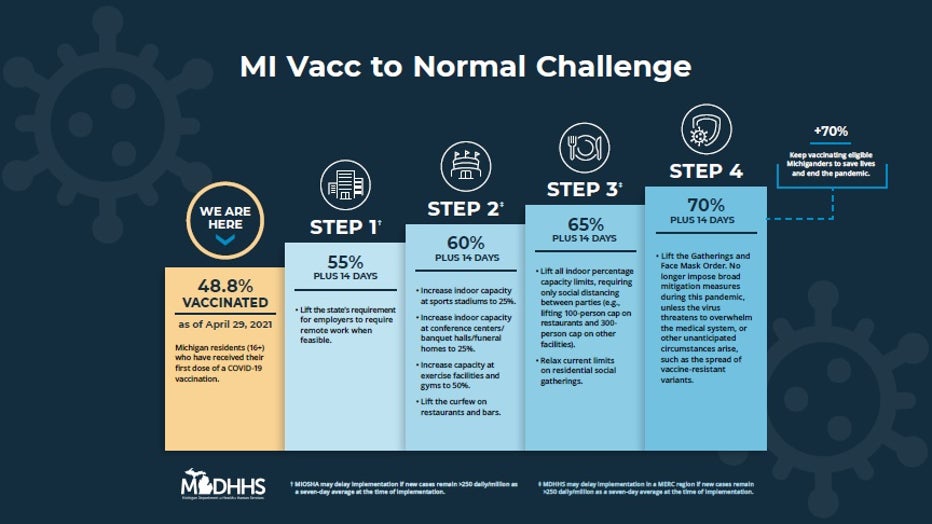 Gov. Gretchen Whitmer unveils the 'MI Vacc to Normal' plan - when Michigan has 70% vaccinated, the mask order will be lifted two weeks later. Currently, Michigan is at 49%. (Michigan Department of Health and Human Services )

But under Gretchen Whitmer's vaccine milestone plan, which ties relaxing health orders to the state's vaccination coverage, only those that got the shot are factored into the total count.

The benchmark that experts like Chief Medical Executive Joneigh Khaldun have preached is hitting 70% immunity by the end of the year. That's also the fourth benchmark on Whitmer's Mi Vacc to Normal plan.

Regardless of which health epidemic orders are lifted at each milestone, Sims said he liked the concept as a plan for opening up.

But experts are growing increasingly concerned that it may be too difficult of a goal to reach for the state and the country. While some areas like Detroit are slowly building on progress, despite initial hesitation about its side effects, other parts of Michigan have met more resistance.

Conservative voters are among the most skeptical of receiving the shot, which may mean regions in Michigan with a higher presence of them would have less protection.

Herd immunity is judged on the amount a virus can spread within a population. If enough people are protected against a virus, then its ability to move through groups becomes more difficult. Vaccines make it easier to reach herd immunity.

It's not clear how many people will need to be protected to reach that status, however. The best guesses for herd immunity are between 70 and 95% protection.