ANN ARBOR, Mich. - If Michigan managed to administer 202,000 adults their first vaccine shot per week, the state would reach its 70% coverage goal by July. 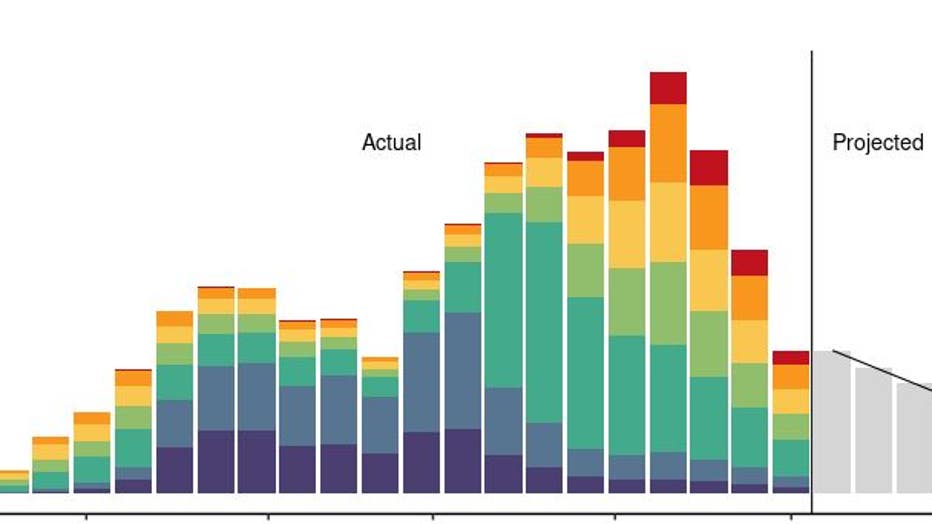 At Michigan's current rate, it may take until mid-August or even later to reach its vaccine goal (School of Public Health at the University of Michigan)

That's the average number of 1st doses that have been handed out since vaccines became available.

But at its current rate, it may take until mid-August or even later for the state to reach its goal and fourth vaccine milestone when it said it would lift its mask mandate.

That's according to a new tool created by the school of public health at the University of Michigan, which uses different metrics of vaccine rates to determine when the state might see enough protection from the vaccine.

Epidemiologists from the school used estimates based on data from other countries and the state's own vaccine rate for choosing the default metrics of doses per week by June 1 and Aug. 1 - selecting 78,692 and 39,346 respectively.

Convincing hesitant and skeptical citizens to take the vaccine has become an increasingly present roadblock for Gov. Gretchen Whitmer and public health experts since it reached 50% coverage.

The average number of first-doses being administered has continued to fall since mid-April. Last week, only 149,151 shots were administered to adults for the first time. Currently, the state has reported 7.1 million doses have been administered and 50.9% of the state has gotten at least one shot.

Congressional Black Caucus leads the Get out the Vaccine effort

Congresswoman Brenda Lawrence is leading a push to get vaccines in the arms of those hit hard by the COVID-19 pandemic.

Last week, the state revealed its four vaccine milestones that once reached will reduce epidemic restrictions that relax rules on businesses and gatherings. They include:

But shortly after Whitmer made her announcement, public health experts wagered the country may have a tough time achieving herd immunity with vaccines due to the number of people who have said they wouldn't get the shot.

The state Senate majority leader said earlier this week that most Michigan residents had some form of immunity because of those that had already contracted the virus. Sen. Mike Shirkey (R-Clarklake) received pushback on that statement because it's not entirely clear what sort of immunity getting infected with COVID-19 provides compared to getting the vaccine.

Companies Pfizer, Moderna, and Johnson & Johnson have all shown their vaccines protect against the worst outcomes brought on by the coronavirus.

This was shown in the makeup of Michigan's hospitalizations due to the pandemic in the past few weeks that included younger people who hadn't got the shot yet.