FOX 2 - "We received a phone call - James had been shot," said Valencia Warren-Gibbs.

It was May 1, 1989 - hard to believe it's been more than three decades since Gibbs lost her brother. He was 21, he was her best friend.

Crime victims and offenders come together to heal

She now runs "Redeeming Kimberly" and is committed to helping returning citizens and giving victims and survivors a voice.

"My brother - James Warren - he was my buddy," she said. "We were awesome friends - we were like the best of friends."

But a drug-related dispute had ended his life. Some of the men involved went to prison, including a 15-year-old boy.

"The prosecutor said, 'Yes we got him.' They sentenced him to 99 years -and I was like, that wasn't justice - and it didn't change the outcome," she said.

Gibbs says the teen didn't have a gun, didn't pull the trigger and he was just a kid.

"The 99 years without parole didn't match what he had done - and it didn't bring my brother back," she said.

The defendant served 28 years and was released when the Supreme Court ruled juvenile lifers must be resentenced. Gibbs advocated for his release - and so did her dad.

She will speak Saturday at a program for crime victims and ex-offenders - it's an effort to give victims a voice - to talk about their pain. And it is for ex-offenders to ask for forgiveness, even if they are not responsible for the crimes.

"I will hold your hand and I hear you - but most importantly, I feel your pain with you," said Kimberly Woodson.

Woodson is a former juvenile lifer who served almost 30 years for the death of an elderly woman named Amy Brown in a firebombing. She now runs "Redeeming Kimberly" and is committed to helping returning citizens and giving victims - survivors -  a voice.

"There are different levels of pain - and I want the conversation to begin so we can heal," she said.

People in pain -  like Tenisha - are still reeling from the sexual assault and death of her 11-year-old son about 20 years ago, and Elizabeth - a survivor of human trafficking - who was shot.

"It wasn't like I was snatched up and smuggled into this," Elizabeth said. "This was somebody that I loved, that put me into this situation - that shot me - I could have lost my life."

"When you cause trauma to somebody else's life, it's like - not only do you mess up their life - you mess up your own life because you have to live with that you did to that person," Elizabeth said.

So much pain that Woodson believes needs to be heard, in order to start healing.

"Just because you chose to forgive someone, doesn't mean that you somehow say that what they done is okay," Woodson said.

"We can lock them away," said Gibbs, "but here (points at heart) is where you get locked up the most. You don't hold onto it, because it keeps you in prison, too."

"Forgiveness is the gift that you give yourself," Woodson said.

Labor of Love is Saturday - 1 p.m. to 4 p.m. at Church of the Messiah, 231 E. Grand Blvd. Detroit Victims, survivors, ex-offenders - everyone is invited to fill these pews and start the conversation - about forgiveness. For more information contact (313) 957-1410 or by email redeemingkimberly5317@gmail.com.

"Laughter love tears but everything is based on forgiveness - everything is about healing our community that is broken from violence." 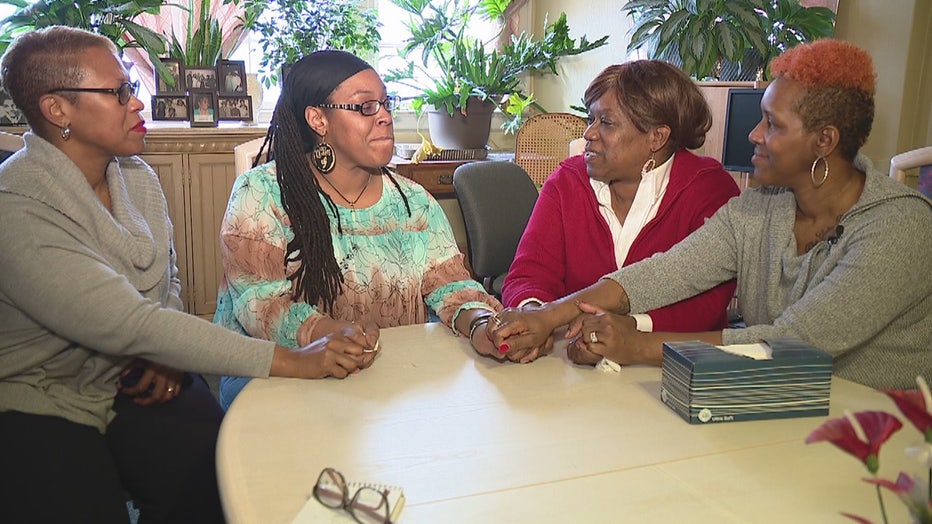