Hall of Shame: Nick Cornies is a contractor so low, he took money from a cancer patient and bailed on the job.

"I had every intention when I took that job, of doing it start to finish," he said.

Nick is full of excuses.

"I just suffered Covid, I'm trying to rebuild and pay them back," he added.

Nick is full of remorse.

Nick: "I feel bad about those jobs."

But, some of his customers say that Nick Cornies is just full of it.

"He had Covid like, three times," said victim Kristy. "His truck broke down. He got in an accident...."

"Everything he was telling me was a lie," said victim Matthew.

Nick Cornies is a contractor so low, he took money from a cancer patient and bailed on the job.

Wolchek: "And he knows you're sick, right?"

You've heard of corn on the cob? This is Cornies on the con.

Nick: "I've seen you do reports on these guys and I'm like I never want to be that guy."

Wolchek: "You're going to be that guy." 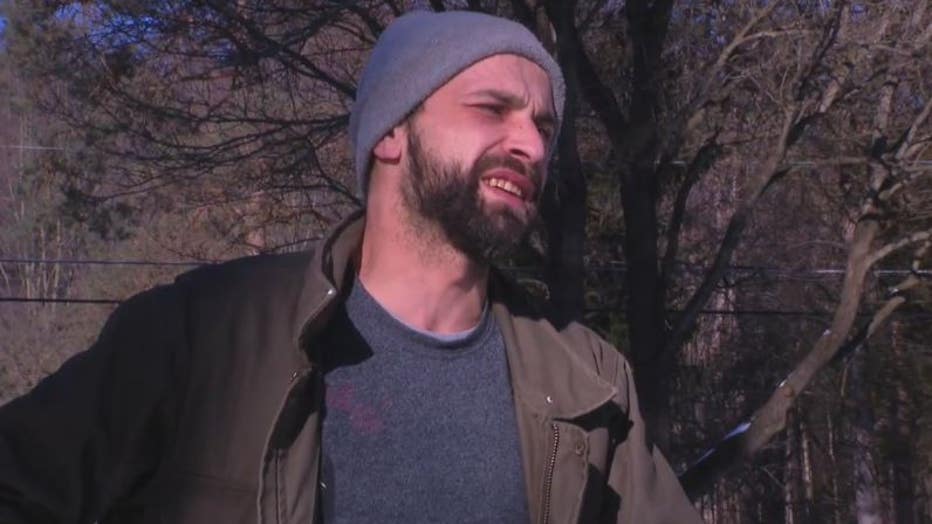 Kristy and her husband Chuck live out in the country. They have a nice life with a nice house and a pond.

But they got bad news.

Chuck needed a sterile room to recuperate in after his cancer treatments, so they got the idea to build a sunroom.

The problem is, they hired a shady guy to build it: Nick Cornies.

"We were stupid and trustworthy and we were going in the middle of Chuck's chemo," Kristy said. "And we trusted him.  He's a neighbor!"

Yep.  Nick lives on the other side of the lake in Davisburg. The couple used him before as a handyman.

"We hired him to fix things on the house," Chuck said. "He painted some of our rooms and we trusted him."

"We gave him the money, he hired someone to dig the footings and then he disappeared," Kristy said.

"That's him busting the floor," Matthew says, showing a photo.

Wolchek: "That's him with the sledgehammer?"

Matthew hired Nick Cornies to put in new floors. He lives in the country too, out in Oxford.

"He broke the subfloor, he broke the joists in the basement swinging a sledgehammer, trying to remove the kitchen tiles," Matthew added.

Photos in Matthew's basement show giant punches in plywood and broken joists in basement ceiling  - those sure look like sledgehammer dents!

Nick said he would fix everything. Good luck with that.

"He strung me along for like four weeks telling me, ‘I'm sick, I'm in the hospital,’ ‘I'm going to come back and finish,’" Matthew said. "He never came back."

Matthew sued Nick for the more than $5,000 he had paid him, but Cornies wasn't going to pay Matthew back.

Instead, Nick lickety-split, and filed for chapter 7 bankruptcy.

That wiped out the judgment Matthew got and a bunch of other debts Cornies accumulated.

Debts like one Cornies Contruction customer who won a giant judgment. 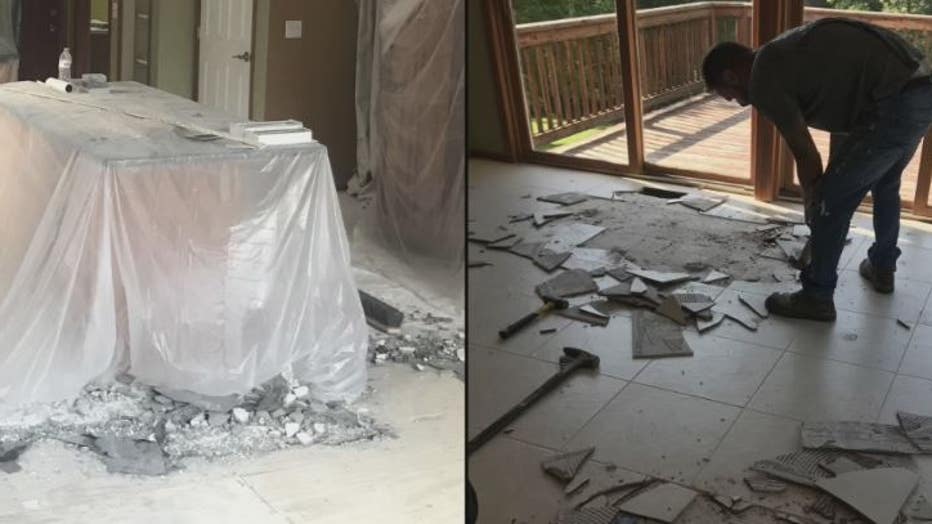 The complaint says "As a result of Cornies remodeling and Cornies' conduct, we have incurred substantial damages in an amount of at least $129,018.00 dollars."

That family told Wolchek they didn't want to talk on camera because they say Cornies creeped them out.

According to the Department of Corrections, Cornies has been convicted of assault with a dangerous weapon, resisting police, giving false information to police, taking money under false pretenses, forgery and uttering and publishing.

He has been convicted of more than 10 felonies.

And Cornies’ home is not exactly "howdy folks" country inviting. He flies a black flag out front, he's got cameras and signs all over the place warning people to stay out.

He uses social media to advertise his business and he looks like a nice down-home country cat on Facebook. But a Pinterest page in his name shows a little darker side with guns and weapons.

So Wolchek started watching Cornies’ crib, but he didn't seem to go anywhere.

After ignoring Rob outside his fence for three days in a row, finally Cornies was ready for a confrontation - or maybe a confessional as you'll see. 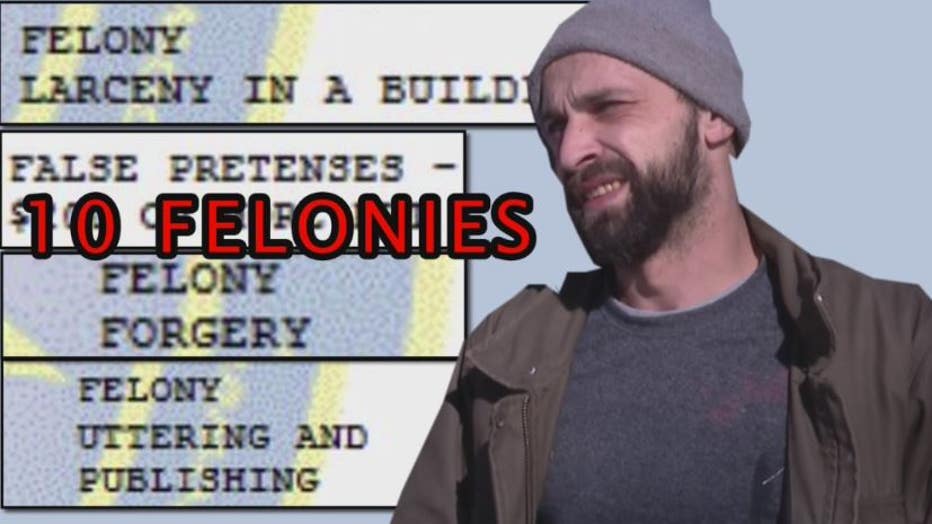 Wolchek: "I need to talk to you about some of these jobs you did a while ago."

Wolchek: "What happened with that?"

Kristy and Chuck sued Nick right after his bankruptcy debt was dismissed, so their judgment against him still stands. He owes them $20,000.

"I still lose sleep about it and I still think about it," Nick said.

All those nights tossing and turning seems to have made Nick so tired, he's only been able to come up with a couple hundred bucks a month to pay them back.

All of a sudden Nick volunteers this:

Not that Wolchek asked, but good for you.

Then Rob asks about Matthew and the demolition nightmare Nick did to his house.

Cornies says his crew wrecked the house, not him.

"They had taken a sledgehammer and smashed the entire floor," he said.

But, Matt took a video -- and he says that's Nick swinging the sledge.

Wolchek asks Nick about the family who paid him more than $120,000 and he ended up botching the job.

Nick: "That all got spent on materials and labor. I made no money on that job."

Wolchek: "Do you know what you're doing?  You don't have a license do you?'

Nick: "I'm on my way to get my license right now."

Wolchek: "Well I hope you're getting a ride."

Because Rob found out, not only does Cornies not have a builder's license - he doesn't even have a valid driver's license.

Wolchek: "So you've been sober for eight years?"

Wolchek: "I applaud you getting sober, but that means you did all these jobs when you were sober. So how did you make such a mess out of yourself?"

Nick: "Because I had every intention of getting it done."

Rob doesn't even know what that means.  Remember, he's the one who bailed out on the jobs, regardless of his intention.

Nick: "Who's going to ever want to hire me?"

Wolchek: "Well, maybe that's what the victims want.  They don't want you to get hired.  They don’t think they are going to get their money, and they want to warn people not to use you."

Rob doesn't know how he ended up having to console this guy.

Nick: "I might as well go get a job at Home Depot."

Wolchek showed Kristy and Chuck some of his conversation with Cornies.

"I just got over Covid," Nick said in the video.

Remember, they say he used the "I have Covid" excuse on them a bunch of times.

"He said he wasn't paying us back because he was in rehab," Kristy said.

Wolchek shows Matthew video of Nick telling him that his crew wrecked his floor and not him.

Wolchek: "He said one of his guys swung the sledgehammer."

Hey Cornies, there's hardly a kernal of truth to what you had to say .... You're in the Hhhhhalll of Shame!"

Cornies contacted the victims after we left, he paid Matthew $500 and paid Kristy and Chuck $800. 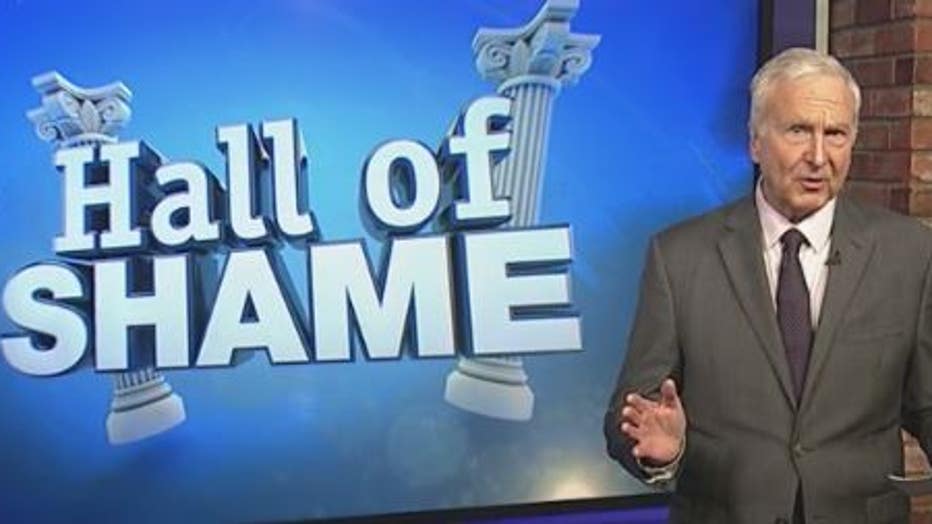