A few years ago, Diane Taglioli-Hura received a devastating cancer diagnosis. Now, the Dearborn Heights flutist is sharing a message of hope.

DEARBORN HEIGHTS, Mich. (FOX 2) - A Dearborn Heights woman is back to playing the flute after battling lung and brain cancer.

Diane Taglioli-Hura became unstable and fell a few years ago, so she went to the emergency room.

"The doctor came in and said, 'Well, I know why you're dizzy,' and I said, 'What's going on?' And she said, ‘You have a brain tumor that's the size of a golf ball,’ and I thought you got the wrong patient," Taglioli-Hura said.

Doctors discovered she had a genetic mutation that lead to lung cancer that spread to her brain.

"When you hear that you have stage four cancer of any kind you pretty much have to process what's going on, especially when you're perfectly healthy the day before," Taglioli-Hura said. 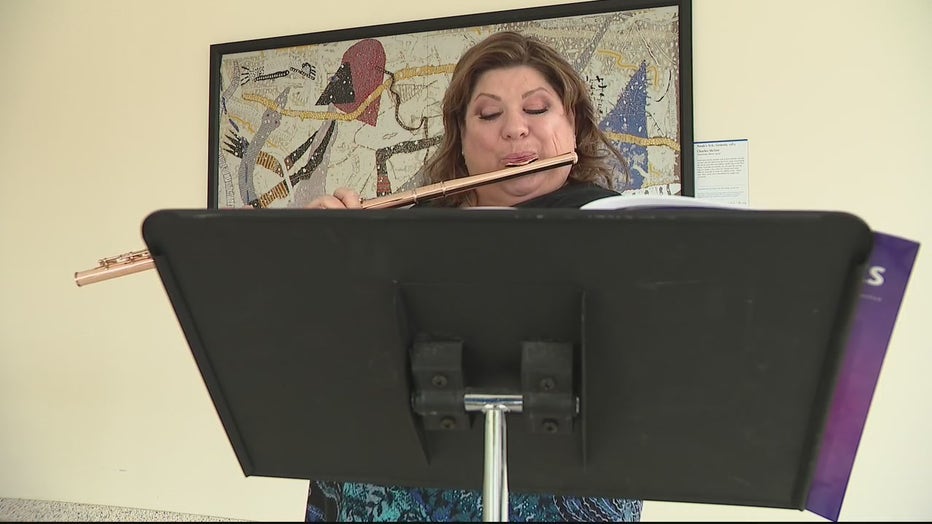 Doctors at Henry Ford Health System recommended a treatment. She takes a pill once a month. Doctors said the pill blocks the abnormal substance that caused the cancer.

"Really, the trend of oncology, the treatment of patients with cancer is to treat them treat their mutations, treat them with targeted therapies that are Individual to the patient, rather than treating everybody like they're the same now," Dr. Ian Lee said.

Taglioli-Hura has returned to playing in the Michigan Flute Orchestra. She said she feels better, and wants to share a message of hope.

"I want to get a message out to people that there's hope, there's a lot of hope," she said.