What it means to defund the police

Some activists have made the demand as they show their anger at the police custody death of George Floyd and other black Americans.

As major cities in the U.S. grapple with a rise in violent crimes, a Pew Research Center survey shows more Americans want more money spent on their local police forces.

It’s a shift from the "defund the police" movement that gained mainstream attention in the wake of the George Floyd killing in 2020. 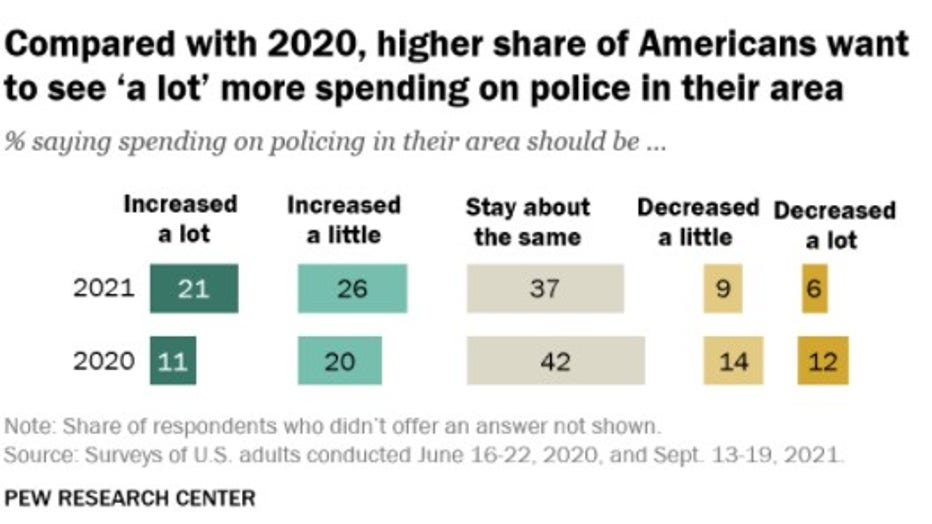 Survey results also showed that support for reduced spending on police has fallen to 15% of adults compared to 25% last year.

RELATED: What 'defunding the police' means

Researchers noted that the perspective on police funding widely varied among different demographics, including race, ethnicity, age and political party. Forty-nine percent of Whites and 46% of Hispanic adults say spending on police in their area should be increased compared to 38% of African Americans and 37% of Asians.

Black adults are more likely to say that police funding should be decreased than those who are White or Hispanic, according to the survey.

President Biden says administration plans to reduce gun violence through revoking licenses to sell guns for those who use loopholes. The President spoke at the White House amid a surge of violence seen in major cities in the country.

But researchers pointed out only 34% of Democrats and Democratic leaners say police funding should be increased while 25% say it should be decreased and 40% would like to see it stay about the same.

But there are shifting attitudes among Black adults and Democrats, the survey showed.

Since 2020, Black Americans and Democrats have changed their views more than White and Hispanic adults have when it comes to decreasing funding for local police. The share of Black adults who say police spending in their area should be decreased from 42% last year to currently 23%. The share of White and Hispanic adults who say funding for local police should be decreased also declined over this period, but not as much.

"Americans’ changing attitudes about police spending in their area have occurred amid rising public concern about violent crime," the research center said. "In July 2021, 61% of adults said violent crime was a very big problem in the country today, up from 48% in April 2021 and 41% in June 2020."

In 2020, protesters pushed to "defund the police" over the death of George Floyd and other Black Americans killed by law enforcement.

Supporters say it isn’t about eliminating police departments or stripping agencies of all of their money. They say it is time for the country to address systemic problems in policing in America and spend more on what communities across the U.S. need, like housing and education.

As of August 2018, 16 states have passed use-of-force laws, a handful of which restricted what police can do.

However, cities like New York, Oakland, Baltimore, Minneapolis and Los Angeles are planning to reinstate tens of millions for the construction of new police precincts, increase police department budgets, among other plans to bankroll more efforts to confront the uptick in crime.

In June 2021, New York City Mayor Bill De Blasio announced that the city will return $92 million for a new precinct after the project had been cut last summer. After slashing the NYPD’s annual operating budget by $400 million to $5.2 billion in the wake of last year’s protests, DeBlasio will now restore about half of those cuts. He said the initial cuts on the financial strains of the pandemic and the need to disperse the funds among communities, which have now been regained from federal stimulus money.

Disbanding an entire department has happened before. In 2012, with crime rampant in Camden, New Jersey, the city disbanded its police department and replaced it with a new force that covered Camden County. Compton, California, took the same step in 2000, shifting its policing to Los Angeles County.

The Associated Press and FOX Business contributed to this report. This story was reported from Los Angeles.