SOUTHFIELD, Mich. - Even after almost a decade of continuous population growth, Michigan is still expected to lose a seat in Congress following the 2020 Census.

Despite the continuous growth rate, Michigan is still expected to lose a seat in Congress. Lisa Neidert, a sociologist professor at the University of Michigan said factoring in the growth rates of other states - ours won't be the beneficiary of more congressional representation. 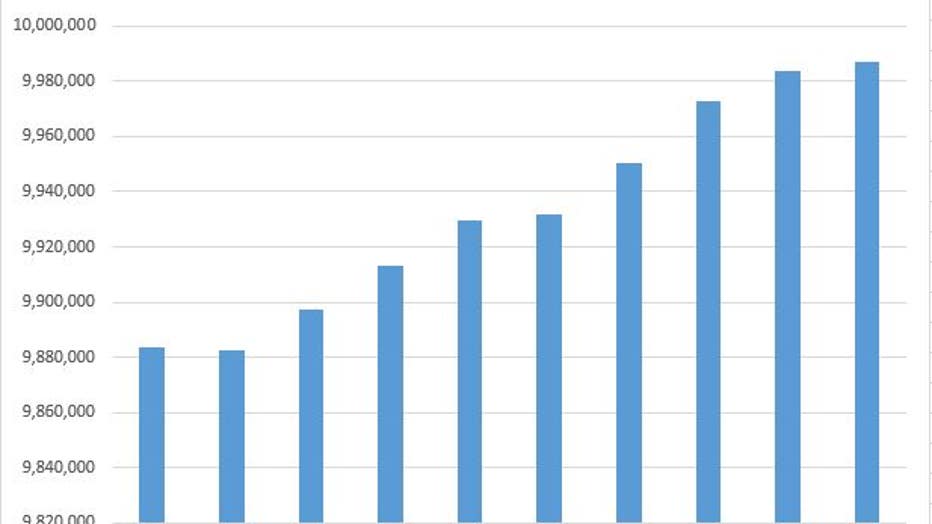 Since bottoming out in 2010, Michigan's population grew almost continuously the past decade. (U.S. Census Bureau)

"There are 435 seats to split up and we're below average on growth," said Neidert.

Neidert said representation in Congress is a zero-sum game. There must always be 435 seats. Even if a state like Michigan shows growth it may not be enough compared to other states growing even faster. And where Michigan falters is its aging population.

As a population ages, fewer babies are born and more people die. When the death rate exceeds the birth rate, sociologists call this "natural decrease."

Michigan has also been a population-loser when it came to interstate migration - people moving to other states. What the state often relied on to buoy these declines was the number of migrants moving to Michigan from elsewhere in the world. For the first eight years of the decade, the state brought in 23,000 international migrants.

But that growth slowed to 13,000 in 2018-19 following tighter immigration restrictions put in place by the Trump Administration. This decline mimics what the rest of the country experienced after bringing in close to a million international migrants in 2010. In 2018-19, about 583,000 people migrated to the U.S..

Michigan isn't alone in these slowing growth patterns and won't be the only state to lose a seat in Congress. Alabama, California, Illinois, Minnesota, New York, Ohio, Pennsylvania, Rhode Island, and West Virginia are also likely to lose a seat after the 2020 Census.

RELATED: 4 states had more deaths than births between 2018 and 2019, US Census shows

The country's growth rate is projected to be one of its slowest over a 10-year period since the first census was taken - back in 1790 when it recorded a 7.1 percent increase.

It will be awhile before the 2020 Census is released, which means its unclear how many of these states will or won’t lose their seat. But Neidert said it’s all but certain that Michigan can count itself among those that will lose representation.

While it’s also uncertain where Michigan’s lost seat will come from, Neidert suspects it will come from a Detroit district. Typically newer lawmakers from smaller districts are at risk of that reorganization, like Rep. Rashida Tlaib, although that's not for certain.

That decision will come out of the 13-person redistricting commission that was established following a ballot initiative that was approved in the 2018 midterms.

Even with this foregone conclusion, Michigan officials aren’t ignoring the outcome of the census. Millions of potential federal dollars hang in the balance if the state’s response rate on the 2020 Census mimics what happened in 2010. After Detroit’s poor showing a decade ago when the city recorded a 64 percent response rate, nonprofits began an active effort in 2019 to bring attention to the survey.

RELATED: Filling out your census costs you time. Not filling it out costs Michigan millions

The Michigan Nonprofit Association estimates for every person missed during the census count, Michigan loses $1,800.