DETROIT (FOX 2) - You might be familiar with Chazz Miller. If you don't know him by name you likely know his work. For the past 17 years, he's been partnering with Blight Busters to stabilize and revitalize Detroit's Old Redford neighborhood.

His job has been beautification by way of the giant murals and art throughout the Artist Village at Lahser and Grand River.

Detroit artist Chazz Miller and Blight Busters have partnered for a new exhibit that will showcase decades of Miller's work.

"The street art can combine and lead into the fine art and that's my goal is to take this to the next level," Miller said.

The neighborhood itself has finally attracted millions of dollars in investments, like for the long-abandoned bank nicknamed the Obama Building because of Chazz's portrait on the outside.

"We're really starting to see dividends for our blood, sweat and tears over the last 32 years. Of course, working with Chazz for the last 17 it's really taken the neighborhood to the next level," said John George with Blight Busters.

He said the Obama Building is now being completely renovated to the tune of more than $3 million for restaurant and retail space down below and lofts up above, as well as a gallery where Chazz's Obama portrait and others will be displayed.

"It's now a fine art piece, which was once a public art piece," Chazz said.

It's one of his many pieces. At 57 years old, his body of work is prolific. "I literally have artwork that goes back to the third grade," he said.

So Chazz is creating a catalog to document his work for what will eventually be an art exhibit. The show will be three blocks long and display his drawings, paintings and sculptures. 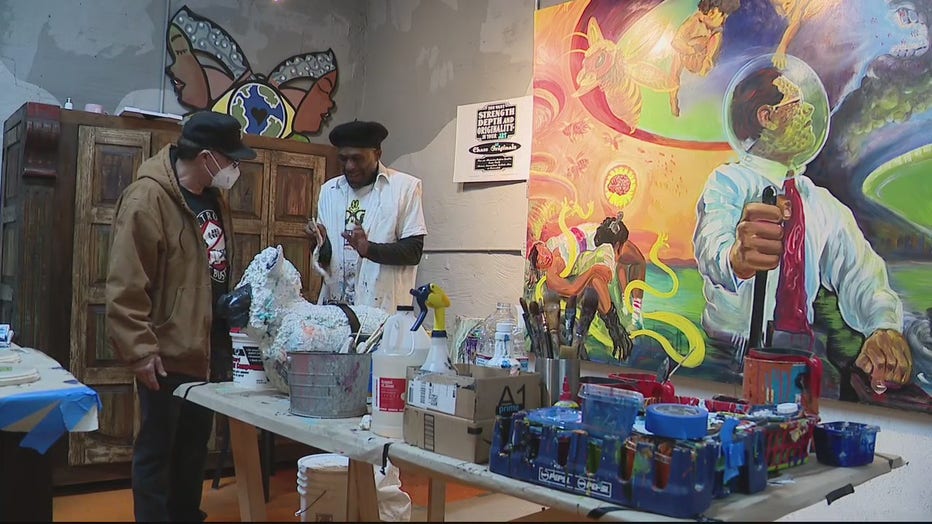 The exhibit will include a variety of his artwork, like when he was commissioned for the Detroit Jazz Festival, to Motown's 40th anniversary, to his Jet magazine series or his own efforts to fight for social justice.

Right now, Chazz is working on a piece called Spirits of Detroit.

It's a story, much like Blight Busters, that has spanned decades and has focused so much on the community that Blight Busters was founded to transform. John George didn't want his children growing up around abandoned buildings - and now his grandchild won't have to.

"For my child's child to see this is very emotional," George said.

It's been a team effort with much more to come.

"To give is to receive, I really believe that. And that's why I feel I continue to be blessed," Chazz said.

Because of COVID-19 it's unclear just when we'll get to see this exhibit. There could be a soft opening at the Obama Building still this fall but it's likely we'll have to wait until spring and maybe summer to see the full exhibit.