DETROIT - Detroit Council Member Raquel Castaneda-Lopez has a personal connection to her city's water quality. She remembers a time when it didn't taste right.

"And I remember questioning our water at times when it tasted funny, coming out of our faucet when we would turn it on in the morning," said the councilwoman.

And now, Castaneda-Lopez's tenure in the city has come full circle. She has drafted an ordinance that would enact new protections for the city's waterways.

"This is a community drafted legislation in response to the collapse of the revere dock site into riverfront," she said while in session at the Detroit City Council.

While southwest Detroit has faced a myriad of environmental issues, the site at the heart of the region's newest contamination is a partially-collapsed dock lining the Detroit River. Operated by Revere Dock, LLC, the company had been storing limestone aggregate materials there without a permit.

When the structure fell, it ignited concerns of potential radiation due to the dock's historic use as a place where uranium rods used for U.S. government nuclear projects were stored.

"Pollution has no boundaries. What impacts me, impacts you," said Theresa Landrum, a community activist attending the protest on Tuesday. "What impacts the water impacts Canada, and our downriver customers, as well as from the east to the west."

To protect the city against future environmental issues, Castaneda-Lopez presented legislation that would mandate landowners to take care of their properties and ensure they did not pollute the surrounding area.

"It does this by requiring them to maintain their docks and their sea walls to prevent any release of pollution into the Detroit River," said Nick Leonard, of the Great Lakes Environmental Law Center. "Requiring them to submit really basic risk assessment and inspection reports to the city." 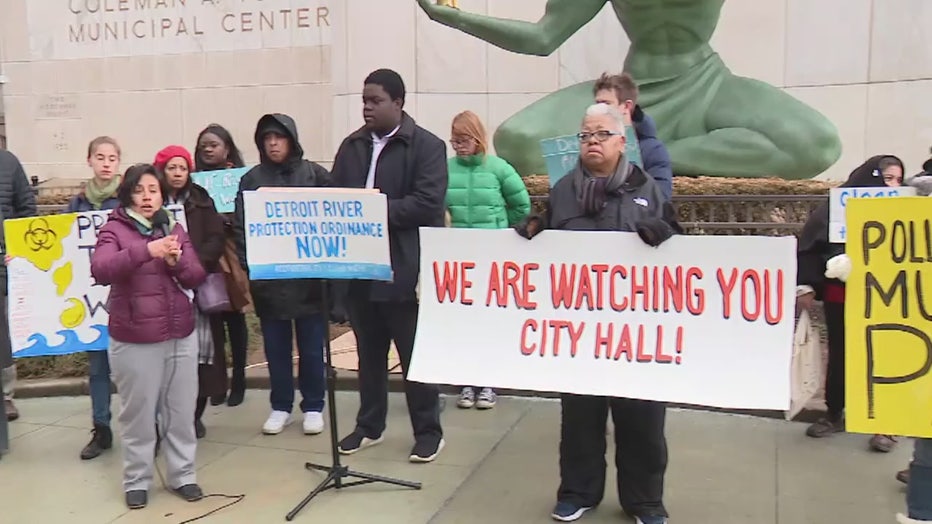 With the drafted ordinance now established, activists are hoping for quick action to see it written into law.

"From there we're hoping to get it assigned to an attorney in the law department, not sure (when) but hopefully we'll get it assigned quickly and we will have a better timeline," said Castaneda-Lopez. "Some time within the next year, we would like to have it introduced and passed."

"The Michigan Department of Environment, Great Lakes, and Energy supports the efforts of local governments to manage and oversee activities in their communities that occur along Michigan waters and that could impact public health or the environment. We will continue to work with our city, state, and federal partners in collaborative efforts to ensure the health of the Detroit River, the drinking water source for millions of southeast Michigan residents. EGLE is providing guidance to Revere Dock LLC on a plan to remediate the site of the aggregate spill into the river and we will continue to hold the company's feet to the fire until the issue is taken care of properly and safely."