DETROIT (FOX 2) - What started as a resource for seniors to get fresh produce and health screenings in Detroit is expanding - not just for people over 55 - but for anyone who needs it.

A nearly 20-year study found the death rate for people 50-59 in Detroit and eight east side suburbs was 122 percent higher than the rest of the state. That's partly why several non-profits realized they had to do something.

What started as a resource for seniors to get fresh produce and health screenings in Detroit is expanding - not just for people over 55 - but for anyone who needs it.

"We're hoping that if people get the word out, that seniors will take part in this initiative. What is great about it is, they don't even have to leave their homes, we will deliver them directly to their doorstep," said Kerrie Mitchell, VP Matrix Human Services.

Nonprofit Matrix Human Services has been running its healthy senior living initiative for four months, delivering fresh fruits and vegetables to people over 55 twice a week to improve their overall quality of life.

The Dying Before Their Time study was done in partnership with Wayne State Med School and the Detroit Area Agency on Aging showed them they had a problem that's worsened.

FOX 2: "Would you say the Covid 19 pandemic has exacerbated the issue you've seen amongst people who are low-income seniors getting access to healthy foods?"

"Yes, the pandemic has been tough on us all, but it has really taken a toll on our low-income families, we've doubled the number of people we serve," she said.

But now because of nearly $400,000 in additional funding they want to help more people, not just seniors, but anyone who can use their help.

"We haven't even thought of a name just yet, we just want to get the word out," she said. "We have access to serve as many people as we need. We're looking up to maybe 200. But that's just because that's what the funding allows.

"But if there is a huge need which we believe there will (be), I believe there are a lot of supporters in the city of Detroit that will choose to partner with us on that.

They're working with Eastern Market and Forgotten Harvest to make deliveries to people like 78-year-old Louis Banks, Jr. 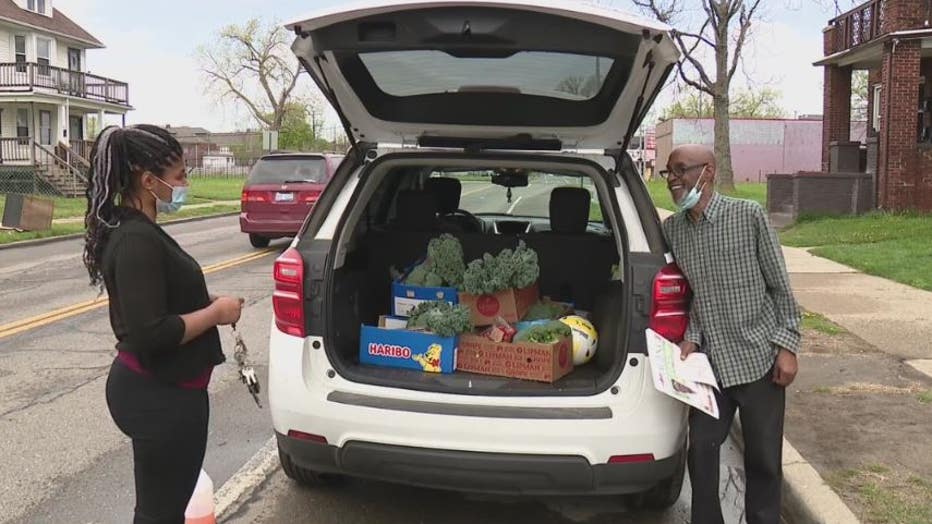 "During this Covid, things have been kind of a hardship," he said. "It means a lot to me."

The produce can also be picked up. They call healthy eating a "food prescription" for chronic illnesses. Banks and many others suffer from diabetes and high blood pressure.

They're also offering free quarterly health screenings as well through the HUDA clinic.

The Michigan League for Public Policy Reports more than 47 percent of Detroit's minors are living in poverty. The program also aims to support modeling healthy behavior and provide the foundations for healthy living to stop chronic illnesses before they start.

For more information about Matrix Human Services go to www.matrixhumanservices.org