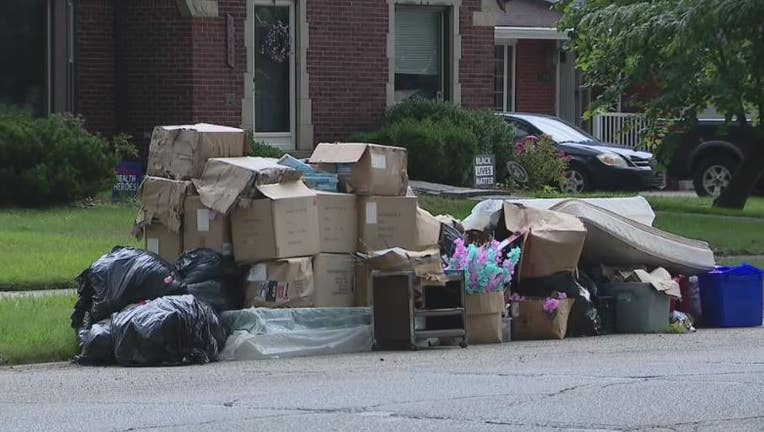 DETROIT (FOX 2) - More than 1,900 applications have already been filed for Detroit's new Basement Backup and Flood Protection program, just two-and-a-half months after it was announced for the city's most flood-prone neighborhoods.

Director Gary Brown of Detroit's water department announced the numbers during a flood town hall in the Jefferson Chalmers neighborhood, which featured more than one tense exchange between residents and officials.

"I don't see any of this getting better," said another woman.

Victoria Park is among the 11 neighborhoods that were selected for Detroit's basement protection plan. However, it, along with the Aviation Sub neighborhood will be the first two places in Detroit to benefit from the program because they were the hardest-hit areas during the June 25-26 flood event, the city says.

Brown said the Detroit Water and Sewerage Department decided on those two sites based on the concentration of data from flood claims filed in the city.

"It became very clear the complete city did not flood. That the major areas that consistently flooded over the years were those 11 neighborhoods," he said. "Why did I pick one on the east side and one on the west side?"

"(Victoria Park) was picked because we are doing a pilot with eight new plumbing companies that hadn't been used before and we wanted to make sure we could take a small neighborhood and make sure the plumbers we were hiring we're going to be able to do quality work before we rolled the program out over the other nine neighborhoods."

Both neighborhoods that were selected already experience historic flooding. Many of the homes already have backwater valves and sump pumps, giving the city a good starting point to help homeowners that already have some infrastructure in place.

Data provided by the DWSD shows that 387 applications have been filed for the pilot program, which represents phase 1 of the city's plan. Work is scheduled to start in the next couple of weeks and will include an inspection of private sewer lines, extensions of downspouts, and installations of certain sump pumps and backwater valves.

After its rollout, the program will expand to the nine other eligible neighborhoods. Phase 2 is expected to begin in July 2022 and continue through December 2024 or when the money runs out.

The city hopes it will act as a gauge to get a better idea of the demand for the program - both from renters and landlords. If April 21's discussion was an indicator, the interest is high.

Almost a year since the major flood event, residents have continued to complain about the fallout. Many at the town hall said they continued to experience flooding and haven't been able to afford fixes to their own basements after draining the water from the home.

While available financing for repairing basements and other flood-damaged portions of property were made available after the flooding, many criticized the processes for applying. Some say their multiple applications were all denied. Others didn't apply at all, confused by which funding source applied to which issue.

Democrats Rep. Joe Tate and state Sen. Stephanie Chang were also at the town hall Thursday. Both listed off a number of available funding streams coming from the state and federal government for flood mitigation.

There are also plans to make the process of applying for disaster relief easier, including legislation that would create a navigator center that would help guide residents through the process. The city also said that the EPA was watching Detroit's rollout of the program and may be another source for expanded funding for the basement protection program.

Residents can apply for the program by submitting an online application at detroitmi.gov/basementprotection or call DWSD at 313-267-8000.