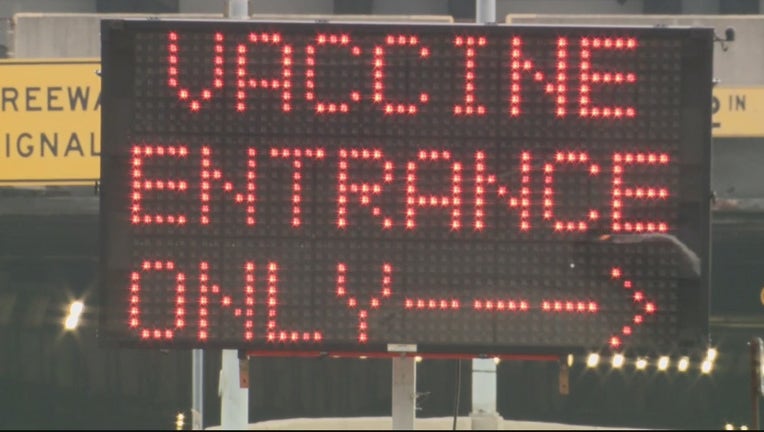 DETROIT (FOX 2) - The City of Detroit has officially opened its drive-up COVID-19 vaccination center at the TCF Center parking structure with plans to administer 20,000 doses of the vaccine to Detroit's most vulnerable populations and those most at risk of spreading the virus.

Mayor Mike Duggan says he encourages people over the age of 75 to call in and make an appointment. On Monday, the first day the phone lines were open, they got 100K calls but the logjam is starting to clear and people started filing in on Wednesday morning.

The city of Detroit is vaccinating hundreds of people in the first few days that the TCF Center is open to give vaccines and Mayor Mike Duggan says it's going to keep growing.

89-year-old Marilyn Robinson was among the first Detroiters in the next phase of the COVD-19 vaccination rollout and got her vaccine at the TCF Center parking structure. Detroit residents 75 and older qualify and any person 65 and older who drives an eligible resident to be vaccinated can also get the shot.

"Gotta get this cleaned up," Robinson said. "I think everybody needs to get vaccinated as soon as possible."

Prioritized frontline workers who live or work in the city, child care providers, and school employees also qualify to get vaccinated at TCF but it's by appointment only.

"I do believe this is the beginning of the end and yesterday, I had my second shot. So at the end of the week, I will go visit my grandkids for the first time since before Thanksgiving," said Detroit Mayor Mike Duggan. "In about 10 days or so after your second shot, you’ve got 95 percent immunity if you’re exposed to COVID and even in the other 5 percent appears to be very mild cases."

After scheduling an appointment at the city's call center, they'll need an ID, a pen, something to write on, and a short-sleeve shirt to get their injection.

For most others, they'll need to be patient as production kicks into gear to manufacture more treatments.

Mayor Duggan says so far the process is taking between 35 and 40 minutes from start to finish but the official advice is to allow at least an hour. Then in a few weeks, you come back for your other dose and go through the exact same process.

The city hoped to vaccinate 400 people Wednesday, 600 on Thursday, and 800 on Friday

Duggan is also optimistic they’ll be able to lower the age limit in the next few days.