A joint team of more than 60 federal and state law enforcement officers executed nearly two dozen warrants for various properties in the Midlands area. (Credit: The Humane Society of the U.S.)

COLUMBIA, S.C. - More than 60 federal and state officers rescued 305 dogs from an alleged dogfighting ring in South Carolina over the weekend, according to the U.S. Department of Justice.

The agency said the authorities made the bust over the weekend after executing nearly two dozen search warrants for properties around Columbia, South Carolina.

It’s believed to have been the largest dogfighting operation in South Carolina history, DOJ officials said.

Authorities said they interrupted a scheduled dogfighting match in Richland County Saturday. The next day, officers executed the search warrants at known dogfighting kennels or those associated with dogfighting.

Of the 305 dogs rescued, authorities said 275 of them are believed to have been involved with dogfighting.

In addition, officers also seized 30 firearms and $40,000 in cash among other evidence of the alleged crime. More than 20 people were also arrested for state charges regarding animal cruelty and dogfighting. 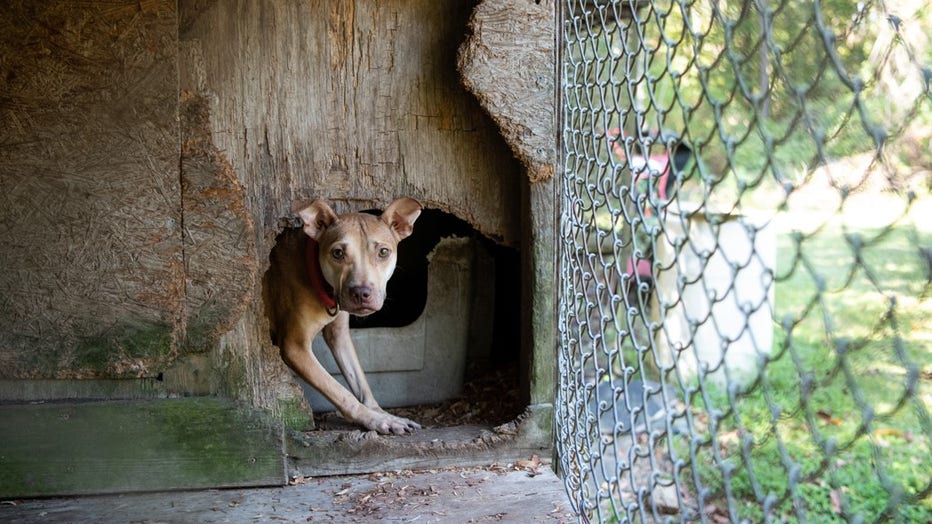 "To force dogs to fight, often to the death, for the enjoyment of others is not only a federal crime, it is also cruel, sadistic, and can create a haven for other illicit activities involving drugs and firearms," U.S. Attorney Adair F. Boroughs said in a news release.

"The depravity involved in carrying out a dogfighting conspiracy is unimaginable to most people, and those involved in such a crime must be rooted out and punished," Gov. Henry McMaster added.

The Humane Society of the United States also assisted in the bust.

RELATED: Swipe right on your fur-ever friend: Tinder teams up with shelters for National Dog Week

The society claimed dogs were found living outdoors in pens or chains. The dogs also appeared not to have access to food or water despite the summer-like weather.

Responders said some of the dogs had severe scarring, along with festering open wounds, lacerations, and abscesses. Some also received emergency veterinary critical care.

"It’s truly distressing to come upon dogs who are severely injured yet chained to trees or left to languish in a pen instead of getting the care they desperately need," Adam Parascandola, vice president of the animal rescue team for the society, said in a separate news release. "Thanks to all the agencies who intervened on behalf of these dogs, this is the last day they’re going to have to live like this."

The society said rescued dogs were transported to a safe, undisclosed location.

The DOJ said the Animal Welfare Act makes it a felony punishable by up to five years in federal prison to fight dogs or to possess, train, sell, buy, deliver, receive, or transport dogs intended for use in dogfighting.